Alluring and vernal short, curly hair dos are the epic introduction to the 1950s. Read on to learn more about the 1950s hairstyles.

Hairstyles have continued to evolve over the last century with every decade coming up with a new look liked by or worn by most of the men and women of that time. Like today’s style is more of a straight and sleek look, back in 1950s the looks were more youthful, glamorous and trendy with the people trying to develop a new style every day. It was an era of innovative and aureate hairstyles some of which even today inspire hair artists. 1950s was the time of peace and freedom. With the war coming to an end, people had more time to care for themselves and try out new looks. The time and the free environment made 1950s to be a glamorous era with rock n roll and the baby boom at its height. All this glamour introduced bold, youthful looks with some trendy, short and curly hairstyles for both men and women. This article provides you with an introduction to the fashion of the fifties, an era pro war when people started to adapt and enjoy fashion again. 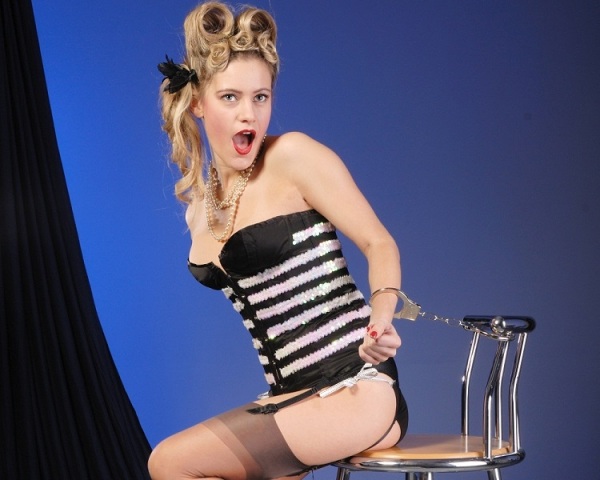 Hairstyles In 1950s
For Women
The Beehive
The beehive style of the 50s was truly styled to look like a beehive. In this hairdo the hair was piled up onto the top of the head and was teased into a large beehive shape. To put the hair in shape a lot of bobby pins, curlers and plenty of hairspray was required.
The Bouffant
The bouffant hairdo became popular somewhere in the late 1950s. A bouffant hairstyle is when the hair at the top of the head is curled, teased and covered with hairspray to give it volume. The rest of the hair is left to hang low and can be styled in many ways as per the choice.
The French Pleat
Another trendy hairdo that gave glamorous looks in the 50s is the French pleat. It was known as the slick and chic hairstyles for the evenings. For the hairdo the hair on the sides were smoothly gathered and then rolled up inwards vertically against the back of the head. The end of the hair was tucked into a roll to create a proper clean look.
The High Ponytail
One of the most famous of all hairstyles was the ponytail which was considered to be a hot style in the 1950s, especially among young girls. Long hair was gathered together at the top back of the head to create a tight and smooth ponytail. Long scarves were used to tie up the ponytail or it was curled into a single, large ringlet.
The Pageboy
The pageboy hair style was a recognizing factor for teenage girls of the 1950s. The hair was given a bob cut just below the ear and the ends of the hair were turned slightly inward giving it a round shape. The pageboy hairstyle was usually cut with short bangs that are slightly curled inwards at the ends.
The Poodle
Poodle was another short hairstyle with curls complementing the looks. To get a poodle the hair was cut to fit the frame of the face and trimmed into a round shape around the head. Women used to perm their hair to get that natural wavy effect or they even used to sleep with curlers to get that extra bounce and tight curls the next day.
For men
Apache
Apache was the hairstyle for men in the 1950s which was dumped faster than it was popularized. The hairdo included hair cut close cropped on the sides with the center shaved strip. Apache was also at times referred to as the reversed Mohawk. This hairstyle did not gain much popularity among the men and was not to be seen after few years.
The Flat Top Crew Cut
Another hairstyle for men that was popular in the 1950s was the flat top crew cut which was in close connection to the apache cut. This form of the hair cut resembles the cut of men in the armed services.
The Ducktail
The ducktail hairstyle popularly known as the DA was among the most popular hairstyles among the youth of 1950s. This was the hairstyle worn by the famous pop star ‘Elvis Presley’. The sides of the hair in this hairstyle were slicked back and the top portion was given a long cut with jagged edges. The sides once cut were brushed back behind the head and then flipped like a duck’s tail.
Pompadour
Pompadour is among the few famous hairstyles among the men from the 1950s. In this type of a hairdo the hair was mounted high in the front, swept up high over the forehead with the sides of the hair made to flatten out.
Sideburns
Another interesting development to the hairstyles of men in the 1950s was the sideburn which was made popular by James Dean and Elvis Presley. Sideburns were cut usually an inch from the ears.
How to Cite