Yuvvraaj is a musical drama, with Salman Khan and Katrina Kaif in the main lead. Go through this review and explore the star cast & music of film 'Yuvraaj'. 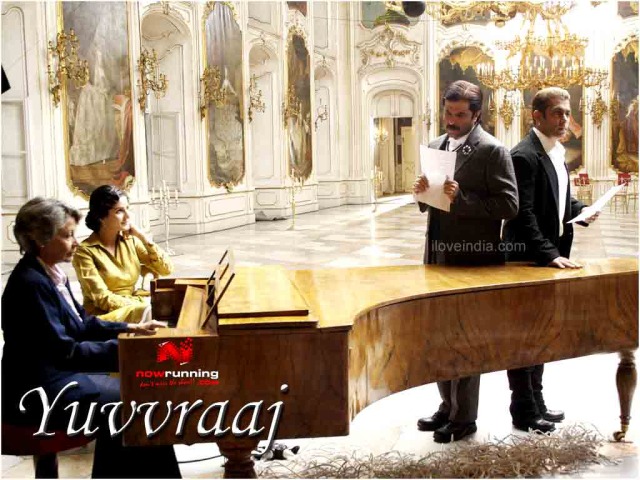 
The much awaited movie of the year, with Salman and Katrina paired opposite each other, has finally hit the theaters and if you believe us, Salman can surely be termed as the 'Yuvvraaj' (prince). He is one actor that you should really look forward to watching in the movie. He has played the part of a super brat with complete conviction and definitely manages to impress.
Katrina is another actor that you should look forward to. She manages to hold her own in a bevy of established actors, like Anil, Salman and Boman. As for the most important part, the chemistry between Salman and Katrina, we wish we could be witness to more. The couple sizzled on-screen, though for a very short duration. Talking about other performances, Anil Kapoor was excellent in the role of an autistic, while Boman Irani was, as usual, his brilliant self.
We hope Zayed Khan could match up to others, though he is not too bad. Subhash Ghai had a good concept behind the movie and even its execution was very good. However, the movie was not completely faultless. One of the loopholes was the faulty script. Even the end was quite predictable. Still, the cinematography was excellent and the music, by A.R. Rahman, simply superb. All in all, 'Yuvvraaj' is a movie worth the money spent on multiplex tickets!

Yuvraaj Pre-release Review
After a long time, Indian audience will be witnessing a musical drama, in the form of 'Yuvvraaj'. Directed as well as produced by Subhash Ghai, the movie is all set for a release on 21st November 2008, under the banner of 'Mukta Arts Entertainment'. Providing the essence to the musical drama are the notes of A. R. Rahman, accompanied by the lyrics of Gulzar. The star cast of 'Yuvraaj' boasts of established names like Salman Khan, Anil Kapoor, Katrina Kaif, Zayed Khan and Boman Irani.
'Yuvvraaj' is a musical drama that revolves around a fragmented family in Europe, which comprises of three brothers - Deven Yuvvraaj (Salman Khan), Gyanesh (Anil Kapoor) and Danny (Zayed Khan). They are the sons of a man who has created loads of wealth for his family. However, in the later years of life, he realizes that during his struggle for being rich, he forgot to give proper time and attention to his sons. The result of his negligence is that they have ended up with no family values at all.
Deven Yuvvraaj, Gyanesh and Danny have grown up considering each other as partners, rather than brothers. All the while, they play dangerous mind games and try to outwit with each other, grasping as much money as possible. One day, a beautiful woman (Katrina Kaif) comes into their life, as a musician in Prague music orchestra. She is the only one who can bring them together on a stage and make them see their relationship in a new light. Yuvvraaj falls in love with the musician, with Boman Irani acting as the obstacle in their way. Will Katrina be able to re-unite the family and remain with her love forever?