EMI is the directorial debut of Saurabh Kabra, starring Sanjay Dutt, Arjun Rampal and Malaika Arora. Browse through this review and explore the star cast & music of Hindi film EMI. 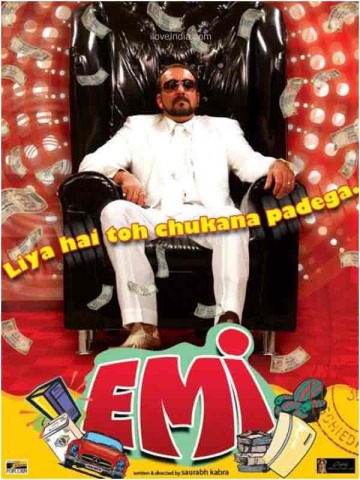 
The producers of 'EMI' will need to take a loan to cover up the expenses they have undertaken for the film. One of the major faults of the movie is that it goes completely off the track after sometime. The basic concept on which it is based, that of easily available loans and their EMIs, is very realistic and convincing. However, the story that has been constructed around it failed to exploit it. Though it starts in a very convincing manner, few minutes into 'EMI' and the typical 'masala' aspect of Bollywood movies comes to the fore.
Midway through the movie, probably even earlier, the focus is lost completely. From fact to fiction, the transition in 'EMI' takes place too abruptly and leaves you disappointed. The writing is not at all effective, more so in the second half. As for the dialogues, they are good only in places. The music is kind of okay, not too hummable. As far as performances are concerned, Arjun Rampal did his part with conviction. He came across as a natural and was a joy to watch. Kulbhushan Kharbanda is another actor who is worth mentioning.
One performer who stands above the entire cast of 'EMI' is Sanjay Dutt. He plays the role of a Bhai, who tries to be a 'Good Samaritan' as well, and does it with élan. Even the goons who act as Bhai's henchmen, Manoj Joshi, Snehal Dabhi and Dayashankar Pandey, have done a remarkable job. Urmila didn't get to do much in the movie, while Malaika simply managed to look good. As for Aashish Chowdhary and Neha Uberoi, they were not at all convincing. In simple words, this one's not even worth watching on DVD.

EMI Pre-release Review
The system of consumer loans and EMI (easy monthly installment) has pervaded the Indian middle class. Saurabh Kabra directorial debut 'EMI' deals with this system only, as to how it is affecting the life of ordinary people. It has been produced by Suniel Shetty, Shobha Kapoor, Ekta Kapoor and Shabbir Boxwala and will be released on 29th October 2008, under the banner of 'Popcorn Motion Pictures Pvt. Ltd'. Chirantan Bhatt is the music director of the movie, while Hamza Farokhi and Sarim Momin have provided the lyrics.
The star cast of 'EMI' boasts of names like Sanjay Dutt, Arjun Rampal, Malaika Arora, Aashish Chaudhary, Neha Uberoi, Natasha Suri, Manoj Joshi, Pushkar Jog, Daya Shankar Pandey, Kulbhushan Kharbanda and Urmila Matondkar. The film is a bittersweet satire on the ever changing credit economy of India and how it affects the life of people. Anil and Shilpa form a contemporary couple - hard working, ambitious and in debts. They get married, despite fears of compatibility, and buy a flat on loan, with EMI only 40% more than the usual rent rate.
The trap begins with their honeymoon, in the cheapest foreign location, paid through installments. With time, things like electronic appliances and car also come into picture, obviously on EMI and their world starts to crumble. Then, there is Ryan, a DJ who yearns to be a musician. He relies on two things - instincts and his Big Male ego. Optimistic and confident, he falls in love with Nancy, a hot chick. Going against common sense and logic, casting Nancy as a gold digger, Ryan goes ahead and marries her. With this, begins his EMI and downfall…
Chandrakant is a 52 year old middle class Mumbaikar, who has a teenage son - Arjun. Arjun lost his mother when he was just 14 and since then, Chandrakant has been spending all his savings on his son, fulfilling his each and every wish. Still, his son feels that he has not done enough for him. Now, Arjun wants to have foreign education. Even though Chandrakant doesn't have any savings left, he buckles under the love of his son and sends him abroad, on loan. He has one hope - after coming back, his son will start earning and everything will be alright.
Enter Prerna, a beautiful lady in her mid 30's who just witnessed the tragedy of her husband's accidental suicide. All she has been left with now is the hope of getting her husband's insurance money, provided she proves that he was murdered. Completing her world is an honest insurance officer, a helpless cop and a lawyer friend. One day, she meets Rafik, a hoodlum who promises to do the job for her, charging 10% of the insurance money. She agrees to the deal and takes a loan to give money to Rafik, starting the web of EMI.

A year has passed. Anil and Shilpa no longer make a happily married couple and are making the rounds of family court to get a divorce. Ryan has finally realized that he isn't so smart after all. Nancy has left him and all he is left with, is his broken heart. Arjun has come back to India after completing his education, but doesn't want to work right away, crashing the hopes of Chandrakant. Rafik has deceived Prerna and she is nowhere near the insurance money. All these people have one thing in common - accumulated debts and unpaid EMIs.