Get set for some rib-tickling comedy with the film Golmaal Returns, a sequel to the 2006 'Golmaal'. With this movie review, check out the star cast & music of Golmaal Returns. 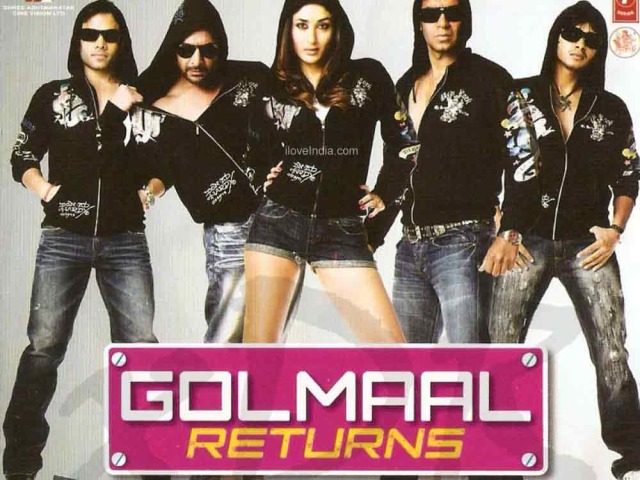 
'Golmaal Returns' failed to catch up to the euphoria created by the original 'Golmaal'. We had great expectations from the movie and sadly, it failed to live up to most of them. The main plot of the movie, concerning the suspicious wife, has been lifted from an old Hindi movie, with the murder bit thrown in for extra measure. Though the star cast of 'Golmaal Returns' was quite powerful, it could hardly manage to generate more than a few laughs.
While watching 'Golmaal Returns', Tusshar Kapoor is the person to look out for. He plays a dumb person and relies mainly on his expression, apart from some aaarghs, oooohs and cat calls, and still makes you laugh. Then, there is Shreyas Talpade who was, as usual, delivers his very best. He made you smile in the recent-release 'Welcome to Sajjanpur' and manages to elicit some laughs in 'Golmaal Returns' as well.
Ajay Devgan, as the husband who is suspected of infidelity, did well. Even Kareena Kapoor was not bad, in the 'saas-bahu fan' role. However, what surprised us was the inefficacy of Arshad Warsi. The talented 'Circuit' could hardly make our lips turn upward. Celina Jaitly looks hot, while Amrita Arora is hardly visible. By the way, what was Anjana Sukhani doing in the movie? All in all, 'Golmaal Returns' is a passable affair, which will not be a bad DVD watch.

Golmaal Returns Pre-release Review
Are you ready to watch a laughter riot this Diwali? 'Golmaal Returns', the sequel to the 2006 'Golmaal', promises to make your sides split. While 'Golmaal' was a super hit of its time, its sequel assures to extend the boundaries of comedy a little further, with its powerful star cast, chartbusting music and, not to forget, rib-tickling scenes. 'Golmaal Returns' is produced by Dhillin Mehta and directed by Rohit Shetty. Releasing under the banner of Shri Ashtavinayak Cine Visions, the movie has Shekhar Ravjiani, Vishal Dadlani, Pritam, Ashiesh Pandit as its music directors.
The lyrics of Golmaal Returns have been written by Sameer, Neeraj Shridhar, Vishal Dadlani, Ashiesh Pandit and Suzie. Q, Kumaar. Due for release on 29th October 2008, the comic movie has a power-packed star-cast, boasting of names like Ajay Devgan, Tusshar Kapoor, Arshad Warsi, Shreyas Talpade, Kareena Kapoor, Anjana Sukhani, Amrita Arora and Celina Jaitley. With such big shot names associated with it, 'Golmaal Returns' definitely seems to be a movie you should look out for.
The movie revolves around Gopal (Ajay Devgan), his wife Ekta (Kareena Kapoor), sister Esha (Amrita Arora) and a dumb brother-in-law Lucky (Tusshar Kapoor). Gopal, the protagonist of the movie, saves the life of a gorgeous woman Meera (Celina Jaitly) from some goons, but ends up getting stuck with her, on a yatch. The duo has to spend the night together and the next morning, when Gopal returns home, he finds his overly-suspicious wife fuming. A die-hard saas-bahu fan, Ekta suspects her husband of adultery.
Gopal knows that it would be very difficult to make her believe that he was innocently stuck with a female. To save his skin, he fabricates a story that he spent the night with his friend Anthony Gonsalves. Ekta refuses to buy the story and writes to Anthony, on the fictitious address given to her by Gopal, inviting him home. Petrified that his wife would find out the truth, Gopal convinces his junior at work, Laxman (Shreyas Talpade), to act as Anthony. Things seem to be working according to the plan, until the real Anthony comes into picture.
While 'the Anthony' confusion is already there, something else also pops up. As if two Anthonys were not enough to create chaos, a dead body is found at the place where Gopal had saved Meera's life. The officer-in-charge of the case is Esha’s boyfriend, Madhav (Arshad Warsi), who cannot stand Gopal. On learning that Gopal was missing on the night of the murder, he starts investigating. What will Gopal do now? Will he able to prove his innocence? The movie is sure to set you rolling down the floor, with some side-splitting comic events.