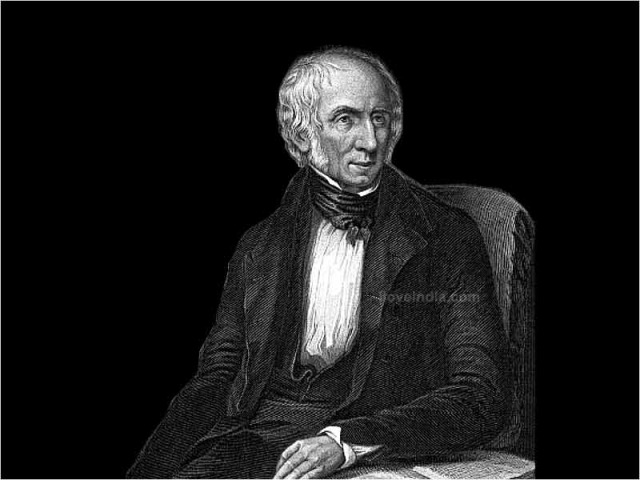 Born In: Wordsworth House, Cockermouth, England
Died On: April 23, 1850
Career: Poet
Nationality: English
An early leader of romanticism in English poetry, William Wordsworth is known to be the first and greatest romantic poet of the 19th century. Successful epic poems, such as ‘The Prelude’ and ‘Ode: Intimations of Immortality’ bestowed this distinguished poet with England’s Poet Laureate in 1843. With the simple language of a common man, Wordsworth delivered poems celebrating the glories of nature and human spirit. His love for nature, especially the sights and scenes of Lake Country, played a major role in most of his poems, which was evident in his personality as well. Such was the seriousness of this profoundly earnest and sincere thinker that his works displayed tenderness and love of simplicity. Nonetheless, this legendary celebrity is best remembered for 1798 ‘Lyrical Ballads’, a joint publication with Samuel Taylor Coleridge. Find out more about William Wordsworth’s life and career by scrolling through the lines below.
Childhood & Education
William Wordsworth was born on April 7, 1770 in Wordsworth House in Cockermouth, Cumberland in the Lake District, northwest England. The second of five children, Wordsworth was born to John Wordsworth and Ann Cookson. His father was an attorney with Sir James Lowther. He enjoyed a happy childhood being close to his mother and sister Dorothy, with whom he shared a close relationship throughout his life. William though close to his mother could not reap her love and affection for long, as she passed away in 1778, after which he was sent to Hawkshead Grammar School in Lancashire. He then entered St. John’s College at Cambridge University in 1787 with the help of his uncles. William graduated in 1791 with a bachelor’s degree.
Early Poetry
William was exposed to poetry when he published his first sonnet in The European Magazine in 1787. He spent his summer holidays traveling to the Alps, France, Switzerland and Italy, mainly for the beauty of their landscapes. But it was only in 1793 that William published his first collection of poems titled ‘Descriptive Sketches’ and ‘An Evening Walk’. Raisley Calvert conferred him with a legacy of £900 to pursue a career in poetry in 1795. The same year, he met Samuel Taylor Coleridge whom he quickly befriended. This friendship produced the legendary romantic work ‘Lyrical Ballads’ in 1798. This work included William’s ‘Tintern Abbey’ and Samuel’s ‘The Rime of the Ancient Mariner’. The same year, William traveled to Germany, together with Dorothy and Samuel, where he began working on his autobiographical piece titled ‘The Prelude’.  Here, he penned several poems, including ‘The Lucy Poems’. He and Dorothy moved back to England along with fellow poet Robert Southey. Wordsworth, Coleridge and Southey together were known as the ‘Lake Poets’. ‘Lyrical Ballads’ saw its second edition in 1800 with only William contributing to its content. The third edition came out in 1802 followed by the fourth and final one in 1805.
Later Works
Until 1807, Wordsworth was only known for ‘The Prelude’ though he had several other poems, such as ‘The Ruined Cottage’ (later known as ‘The Peddlar’), ‘The Recluse’, ‘Views of Man’, ‘Nature and Society’, ‘To a Butterfly’, ‘I Wandered Lonely as a Cloud’, ‘To The Cuckoo’, and ‘The Rainbow’. In 1807, Wordsworth published his ‘Poems in Two Volumes’ which included ‘Ode: Intimations of Immortality from Recollections of Early Childhood’. From here on, William produced an altogether different image of himself in the field of poetry. Though William reveled in his professional life, his personal life was in turmoil, as he lost two of his children in 1812. The next year, he was appointed as Distributor of Stamps for Westmorland, receiving £400 as yearly income, thereby making him financially secure. With the help of this income, he, along with Dorothy and family, traveled to Rydal Mount, Ambleside where he spent the rest of his life. 1814 saw the second part of ‘The Recluse’ as ‘The Excursion’ though the first and third parts were never completed. By 1820, Wordsworth was at the peak of his career enjoying the much-acclaimed success.
Marriage
On his tour to France in 1791, Wordsworth met a French girl named Annette Vallon, daughter of barber-surgeon. Their love affair lead to the birth of an illegitimate daughter, Anne Caroline in 1792. However, due to lack of money, Wordsworth returned to England alone, but supported both of them throughout his life to his best. His poem ‘Vaudracour and Julia’ was highly influenced by this love affair. Wordsworth married his childhood friend, Mary Hutchinson in 1802. Dorothy continued to stay with the couple and maintained close relations with Mary. The couple gave birth to five children, John Wordsworth, Dora Wordsworth, Thomas Wordsworth, Catherine Wordsworth, and William “Willy” Wordsworth. Thomas and Catherine died early in their childhood in 1812.
Honors
Wordsworth was conferred upon with an honorary Doctor of Civil Law Degree in 1838 from Durham University. The following year, he received the same honor from Oxford University. He was even awarded a civil list pension of £300 per year in 1842. A year later in 1843, he became the Poet Laureate. Though he refused the title initially considering his age, he later accepted it after being assured by Prime Minister Robert Peel.
Death
Wordsworth died on April 23, 1850 due to an aggravated pleurisy. He was buried at St. Oswald’s Church in Grasmere, Cumberland, England. His lengthy autobiographical ‘The Prelude’ was published by his wife Mary months after his death.
Notable Works
Timeline
1770: William Wordsworth was born in Wordsworth House, Cockermouth, England
1787: Entered St. John’s College, Cambridge University
1791: Received a bachelor’s degree in arts
1791: Met French woman, Annette Vallon
1793: ‘An Evening Walk’ and ‘Descriptive Sketches’ are published
1798: The renowned ‘Lyrical Ballads’ was published
1802: Married childhood friend Mary Hutchinson
1807: ‘Poems in Two Volumes’ was released
1838: Received a doctorate degree in Civil Law by Durham University
1839: Oxford University bestowed William with a doctorate degree in Civil Law
1843: Honored with the Poet Laureate of England
1850: Died in Cumberland, England aged 80
1850: ‘The Prelude’ was published by wife Mary posthumously
How to Cite