iPods have come a long way since the time of being used only as a music device. With different types of iPods available in the market, read on to get the best deal when you think to purchase one.

The launch of a portable media player by Apple, called iPod, in the year 2001 has taken the world by a storm and has drastically changed the definition of listening to music. Having the ability to play an array of audio formats such as MP3, AAC/M4A, Protected AAC, AIFF, WAV, Audible Audio Book, and the like, the iPod has been re-inventing itself and getting better with each phase. While the first generation iPods simply had a storage capacity of 5GB and a mechanical scroll wheel, the second generation iPod had a memory of 10GB and a touch sensitive wheel. Navigation through touch interface and slimmer casing defined the third generation of iPods, while the generation that followed had a click wheel making it possible to store as well as view pictures through an iPod. The iPod soon became video-enabled and the interface became better with each passing day. While purchasing an iPod, the primary factors that one should keep in mind are the storage capacity that you require, price, color as well as the size. This article provides several versions of iPods since its inception, ranging from the ever popular iPod Classic and iPod Nano to the iPod Shuffle and iPod Touch, with suitable variations which suit every budget. 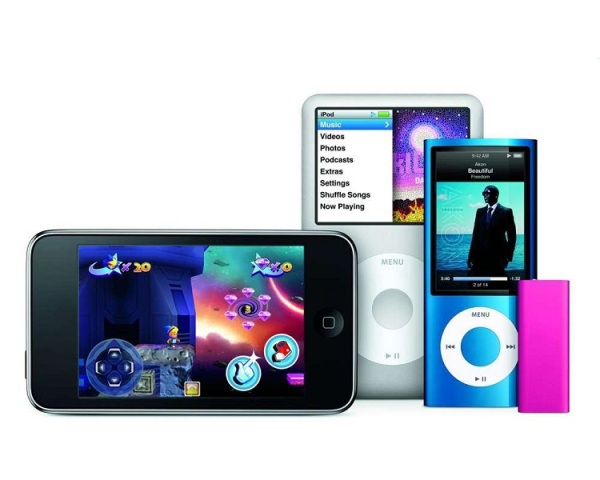 Different Kinds Of iPods
iPod Classic
The iPod classic has a storage capacity of 160GB and can hold up to 40,000 songs or 200 hours of video or 25,000 photographs. This iPod is especially designed for those who seek the highest available media storage. With 36 hours of battery life, one can keep rocking for long. The 2.5 inch vivid video screen makes viewing photographs simple. iPod classic allows one to carry his entire music and movie library with him anywhere. Available in silver and black color, this iPod is priced somewhere around $250.
iPod Nano
The iPod Nano is available in nine bright colors with a polished anodized aluminum finish. The new built-in video camera is the main USP of the music device. With a storage capacity of 8GB or 16GB, it has a slim rounded design and is smaller in size as compared to an iPod Classic. While the 8GB iPod Nano can store up to 2000 songs, the 16GB iPod Nano has the capacity to hold up to 4000 songs. Its unique characteristic feature is that one can shuffle the songs by shaking it up and down. One can also view images on the 2-inch wide screen by tilting it. The latest features that have been incorporated in it include FM Radio, genius mixes and a pedometer.
iPod Shuffle
Considered to be the world’s smallest music player, the iPod Shuffle is less than two inches and is available in both 2GB and 4GB capacities. With enough space for multiple play lists and audio books, the device is just perfect companion you can ask for, for your morning exercise or your commutation to work. The sleek and durable iPod Shuffle can store around 1000 songs and is available in five gleaming colors. It is priced at about $60. A unique feature of this iPod is Voice Over, which speaks in 20 different languages and tells one the title of the song, the artist and names of the play lists. At times when the battery needs to be charged, the voice over tells that as well.
iPod Touch
Whether it is listening to music, watching movies, surfing the web or playing games, all you need to do is simply touch the screen on the iPod Touch and get going. Available in storage capacities of 8GB, 32GB and 64GB, it features a video screen of 3.5 inch. The iPod Touch offers WiFi web browsing and just like the popular iPhone, one can check his mail, browse the web, update his facebook status as well as access maps in addition to its other functions. Tapping, tilting and turning the iPod Touch helps you get past the levels when it comes to playing the exciting in-built games. This gaming device cum pocket computer cum music player is priced from $200 onwards.
How to Cite