The capital city of Italy, Rome has numerous tourist places to keep you busy. Check out the things to do in Rome, including the wish to see its various attractions.

Languages: Italian, Albanian, Slovenian, German and French
Best Time to Visit: March to May and September to November
Time Zone: CET (UTC+1)
Driving Side: Right Side
Main Attractions: Colosseum, St. Peter’s Basilica, Sistine Chapel, Pantheon, City Center, Trevi Fountain, Forum Romanum, Piazza di Spagna, etc
As we hear the word ‘Rome’, the first thought that comes in mind is that of magnificent basilicas. Being home to ‘The Vatican’, the seat of Roman Catholicism, the city has been associated with Christianity since ages. It is located in the central-western portion of the Italian peninsula, at the confluence of Aniene River and Tiber River. Apart from being the largest city of Italy, Rome is also its most populous one. Being one of the few unscathed-survivors of the World War II, it still retains its Renaissance and Baroque character. In fact, the Historic Center of Rome has been listed by UNESCO as a World Heritage Site and forms one of its most popular tourist attractions. If want to know more about the things to do in Rome, read further.
Places to See in Rome
Colosseum
One of the most popular attractions of Rome, Colosseum was earlier known as ‘Flavian Amphitheater’ and was the largest building of its time. The construction work on the monument started somewhere around 72 AD and was complete din 80 AD. It formed a part of Nero's huge park, situated in the center of the city. During those days, the amphitheater had more than 80 entrances and could house around 55,000 spectators. The massive earthquake of 847 led to the destruction of the monuments and today, it stands mostly amidst ruins.
Basilicas
You cannot go to Rome and come without visiting its magnificent basilicas. Amongst the most prominent ones is ‘St. Peter’s Basilica’, whose foundations were laid as early as 64 AD. It was later completely renovated in the early 16th century. The Sistine Chapel is known for being adorned with painting of Michelangelo and other prominent artists. Basilica di San Giovanni dates back to 4th century, becoming the first church to be built in Rome. Basilica di Santa Maria Maggiore and Basilica di San Clemente are also worth a visit.
Museums
Rome is famous for having museums galore, serving as a reservoir of its rich legacy. National Museum of Rome comprises of a number of museums, spread throughout the city. They house antiquities dating from 5th century BC to 3rd century AD. ‘The Vatican’ is also home to numerous museums, most of which merit a visit from you. Make sure to visit National Gallery of Ancient Art and National Gallery of Modern Art also. Almost all the museums in Rome will bring you face to face with most amazing forms of art.
Villas
Seeking to provide you a glimpse of Rome’s past are the city’s various villas. Villa Borghese came into existence in the 16th century, when it was opened as a vineyard, and was turned into a park in 1605. It also comprises of a number of museums and a zoo. Then, there is Villa Farnesina, which once served as the venue of Rome’s grandest feasts and parties. Visit the villa and feast your eyes on some of the most magnificent paintings. The other not-to-be missed villas are Villa Gregoriana, Villa Lante and Villa d'Este.
City Center and Pantheon
A trip to Rome must include a visit to the City Center as well as the Pantheon. Dominated by the traditional ‘Seven hills of Rome’, the City Center still retains large parts of the ancient city walls. Though pretty small, it houses over 200 palaces, 900 churches, eight of Rome's major parks, etc. Pantheon boasts of exquisite architectural beauty. Built by Hadrian in 120 AD, as a temple for the pagan Gods, it was converted into a church in 609. The building houses the Carafa Chapel and the tomb of Fra Angelico.
Shopping
Right from antiques, silver and jewelry to liquor, perfumes, leather goods and fashion items, you will find anything and everything in Rome. Fausto Santini is the perfect place to shop for designer shoes, while Fratelli Bassetti is known for housing Italian silks and other couture fashion fabrics. Profumeria Materozzoli is one of the best cosmetic shops in Rome and is a must-visit for ladies. If you want to buy a variety of different items, like clothes, accessories and perfumes, Tad is the one-stop shop for you.
Entertainment
Rome won’t let you feel disappointed in terms of entertainment, other than sightseeing places. There are a host of coffee bars, clubs, bars, pubs and restaurants in the city, including gay and lesbian bars. When in the city, make sure to visit its wine bars, serving some of the most exotic liquors. If you are game for performing arts, Parco della Musica, Teatro Olimpico and Teatro dell'Opera are the places to be. One thing is for sure, whatever be your tastes, you will surely come from Rome ‘thoroughly entertained’. 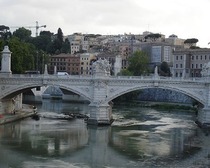