Philadelphia is a culturally as well as historically important city located at Pennsylvania in the United States. Check out the popular tourist attractions & things to do in Philadelphia.

Things To Do In Philadelphia

Best Time to Visit - Fall, late spring or early summer.
Currency – Dollar
Main Attractions - Old City, Chinatown, Avenue of the Arts, Benjamin Franklin Parkway, Brandywine Valley
The sixth largest city of Pennsylvania in the United States, Philadelphia is an ideal place to spend a vacation. A truly modern city in the present times, Philadelphia is important historically too. It was here that some of the ideas and its consequent actions led to the American Revolution and independence. When here, be sure to see the Liberty Bell and Independence Hall where the U.S. Constitution and Declaration of Independence were signed. The Philadelphia city is an art connoisseur’s paradise as it houses some remarkable art museums, theatres and art galleries. For instance, it has the Franklin Institute Science Museum honoring the life and work of Benjamin Franklin. So if you want to know more about Philadelphia tourist attractions, just read on!
Old City
Old City, at times spelt as ‘Olde City’, is a neighborhood in the Center City of Philadelphia. Located in the area near the Delaware River, the Old City happens to be the first commercial district of the United States. Once here, you can pay a visit to the various stores, theatres, restaurants and galleries featuring a bohemian culture. You will catch here a vivid historical glimpse of the otherwise modern and constantly evolving city. Historic landmarks like Elfreth's Alley, an ancient residential alley and Betsy Ross House, the dwelling place of American woman Betsy Ross who made the first American flag, can be sited at the Old City.
Chinatown
Chinatown is a regular, principally Asian neighborhood, but one that is located within the Center City district at Philadelphia, US. When you come to this neighborhood of Philadelphia, you get to see the famous ‘Friendship Arch’. It is an elaborate paifang i.e. a traditional Chinese architectural structure like an archway. Dine at any of the 100 plus multi-cuisine restaurants at Chinatown to savor ethnic dishes of Korea, Malaysia, Vietnam and Thailand. Purchase little souvenirs from the various stores at Chinatown.
Avenue of the Arts
The Avenue of the Arts is number one arts and entertainment sector at Philadelphia. It (Avenue of the Arts) officially starts from Broad Street and Glenwood Avenue, north of Temple University and runs south on Broad to Washington Avenue. It is home to a number of the city's prestigious concert halls and theatres like the Kimmel Center, Merriam Theatre, Wilma Theatre and Academy of Music. The Avenue also has many museums and galleries. You are bound to fall in love with the Avenue of the Arts, if you are an art enthusiast. Shopping too will prove to be a fun experience.
Benjamin Franklin Parkway
This one is a picturesque street that passes through the cultural heart of the city of Philadelphia. On Benjamin Franklin Parkway, therefore, you will get to see some most well-known tourist sites. These include Basilica of Sts. Peter and Paul, Swann Fountain, the Free Library of Philadelphia, the Franklin Institute, Moore College of Art and Design, the Academy of Natural Sciences and the Rodin Museum. So keep aside a good part of the day to leisurely view these tourist spots on the Benjamin Franklin Parkway.
Brandywine Valley
The Brandywine Valley is an area of unique visual appeal in Philadelphia. Serene and beautiful, it winds past forests, meadows and hillsides in a rural, almost Vermont-like strip. A visit to the Brandywine Valley will prove to be a special treat during spring time as this is when the gardens are in full bloom. When here, do see the Brandywine River Museum. Three other things not to be missed out on include locally grown mushrooms, wine and the Brandywine Battlefield Park. 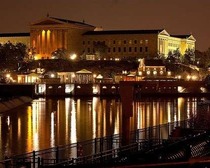