Madrid, the capital city of Spain, offers a number of things to do. Check out various places to see and tourist attractions in Madrid.

Languages: Castilian, Valencian
Best Time to Visit: April to May and September to October
Time Zone: GMT +1/+2
Driving Side: Right Side
Main Attractions: Puerta Del Sol, Plaza Mayor, Royal Palace, Parque del Buen Retiro, Museo El Prado, Museo Nacional Centro de Arte Reina Sofía, etc.
Madrid is the largest city of Spain, apart from being its capital. Located on the river Manzanares, it is the seat of the government, along with being the country’s political center. It is also the seat of Spanish Monarch, a fact which contributes towards making it a cultural hub as well. Madrid is even a significant economic center in Europe, with its Barajas airport being the largest in Spain. Being a major financial center, it houses a number of Spanish company offices, along with the headquarters of world’s three largest companies. Moreover, the city houses a number of exciting places to see and offers its visitors many things to do. To know more about the tourist attractions in Madrid, read on.
Sightseeing
The sightseeing tour across the city of Madrid is truly rewarding as it offers great deal of tourist attractions to the visitors. Puerta Del Sol is one of the thriving places in Madrid, housing a number of places within its complex. The square also contains the famous clock, whose bells mark the traditional eating of the Twelve Grapes and the beginning of a new year. Next is the Plaza Mayor, which is yet another famous square in the city. It is surrounded by three-story residential buildings, with 237 balconies facing the Plaza, along with nine entranceways.
Plaza Mayor is dominated by Casa de la Panadería, which serves as the venue of municipal and cultural functions. Besides, the Royal Palace of Madrid is also a must visit spot. It is the official residence of the King of Spain, which is taken care of by the Spanish state. The place owns the acclaim of being the largest in Western Europe, having more than 2,800 rooms. Moreover, Parque del Buen Retiro is a popular park in Madrid, which is dotted by a number of exotic sculptures, monuments, galleries and a peaceful lake.
Museums
Madrid is home to a number of classy museums. Amongst the worth visiting museums is Museo El Prado, which houses fine collection of European art, based on former Spanish Royal Collection. It is even known as the Museum of Painting and Sculptures. Next is the National Museum of Spain, officially known as Museo Nacional Centro de Arte Reina Sofía. It is dedicated to Spanish art, which has a collection or works of various artists. The National Archaeological Museum of Spain exhibits numismatic, archaeological, ethnographical and decorative art collections, compiled by Spanish monarchs. Other noteworthy museum includes Museo Thyssen-Bornemisza, Museum of the Americas and Museo Sorolla.
Sports
Madrid is home to Real Madrid, which is one of the most successful football clubs in the world. This evidently reveals the intensity with which the sport is enjoyed here. Football is a rage here, which was at its peak during the 1982 FIFA World Cup final hosted here. It is one of the five cities in Europe that contain two UEFA 5-star stadiums. Apart from this, the city also has two basketball teams and also hosts Circuito Permanente Del Jarama, a motorsport race circuit, which formerly hosted the Formula One Spanish Grand Prix. Skiing is another adventure sport, which can be enjoyed here.
Nightlife
Madrid is known for its upbeat nightlife and freaky nightclubs. The people of the city are known to groove on the music all night long and halt at the dawn, just to have some chocolate con churros. However, during the day, they would be out at work, with the same energy as they exhibited at the nightclubs in the night. Some of the most popular night destinations include the neighborhoods of Bilbao, Tribunal, Alonso Martinez or Moncloa, together with Puerta del Sol area (including Opera and Gran Via, both adjacent to the popular square) and Huertas (barrio de Las Letras). 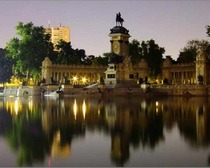