Kodaikanal is a charming hill station, situated in the South-Indian state of Tamil Nadu. In this article, we tell you about its tourist attractions i.e. the places to see in Kodaikanal.

Kodiakanal, amongst the few hill stations in Tamil Nadu, is a picture of tranquility and beauty. Nestled amidst the luxuriant Pali hills, on its southern crest, the place seems to be surrounded with sylvan splendor. Kodaikanal is perched at an altitude of approximately 2,133 m, from where the valley below look like a painting created by a deft hand. Wooded slopes, massive rocks, cascading waterfalls and a meandering lake, all of them serve as the signatures of mesmerizing grandeur of the hill resort. Apart from being home to a large number of tourist attractions, Kodaikanal is also known for housing a number of reputed educational institutions. 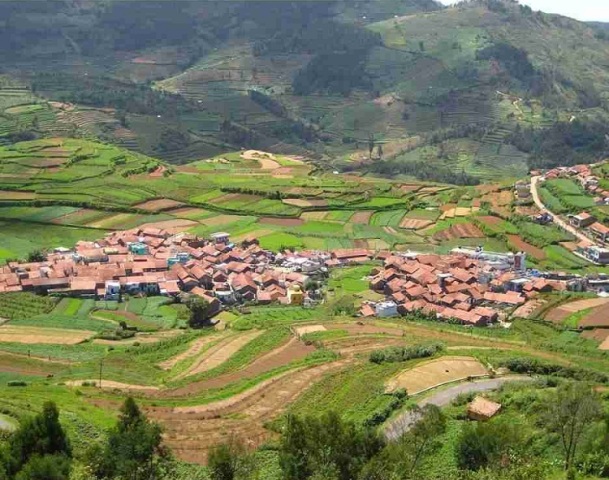 Image: By Parthan (originally posted to Flickr as Poomparai village) [CC-BY-SA-2.0 (http://creativecommons.org/licenses/by-sa/2.0)], via Wikimedia Commons
Places to See in Kodaikanal
Kodaikanal Lake
Kodaikanal Lake is the most popular attraction of the hill resort. Situated right in the heart of the town, the lake has a shape quite similar to that of a star and spreads over an area of approximately 60 acres. The lakeside serves as the perfect spot for indulging in picnics as well as taking long walks. You can also go for horse riding and boating here.
Bryant Park
Another frequented spot of the hill station is the Bryant Park, located on the eastern side of Kodaikanal Lake. It is basically a botanical garden, named after its founder, Mr. Bryant, a British Army Officer. Here, you will find a blooming growth of assorted flower species, including roses and lilies. The park also serves as the venue of a horticulture show, organized every may.
Flora Museum
For those who love to commune with nature and its various facets, a visit to the Flora Museum is a must. Situated in the Sacred Heart College of Kodaikanal, the museum houses an 'Orchidarium'. This 'Orchidarium' is home to more than 300 species of orchids. Apart from that, one can also see other exotic plants, scrupulously collected from the areas in and around Nilgiris.
Astrophysical Observatory
If the universe attracts you even a bit, do make sure to take a peek inside the Astrophysical Observatory. Being an observatory, it is sited at the highest point of the hill resort. Basically a research center in meteorology and solar physics, the observatory was built way back in the year 1889. Apart from witnessing planetary movements, you can also have a look inside its museum.
Kurinji Andavar Temple
The religiously-inclined ones will find the perfect destination in the form of the Kurinji Andavar Temple. Lying around 3 km from the Kodaikanal Lake, the temple is dedicated to Lord Muruga, also refereed as Kurinji Andavar (God of Hill). It has been built as per the Pallava style and is also known for the cultivation of Kuranjini flower, which blooms every twelve years.
Pillar Rocks
Time for some sightseeing! Head for the Pillar Rocks, located approximately 7 km away from the center of Kodaikanal. They comprise of three massive rocks, which soar up to a height of around 400 m. The rocks protrude towards the sky and house a mini garden also. From here, you can have amazing views of the sunsets as well as a gripping night view of the city.
Dolphin’s Nose and Coaker's Walk
Dolphin’s Nose is a flat rock in Kodaikanal, projecting over a bottomless gorge. From here, you can have awe-inspiring views of the Rolling Hills, the name given to steep, rocky cliffs. If you just want to have a walk around the periphery of the Kodaikanal Lake, take Coaker's Walk. It is a steep, one and a half kilometer pedestrian path, constructed by Lt. Coaker, which runs parallel to the lake
Accommodation
Being a popular hill resort of South India, there is no dearth of accommodation option in Kodaikanal. Be it luxury, world-class facilities or reasonable prices, hotels in Kodaikanal cater to your each and every need. If you want absolutely plush accommodation, The Carlton, which is a 5-Star hotel, will definitely suit your desires. However, a little lesser sumptuousness is amazingly offered by numerous 4-Star and 3-Star hotels, such as, Summer Migrations, Green Acres Resort, Sterling Valleyview Resort, etc. And if you’re on a certain budget, Kodaikanal has aplenty of budget hotels, like Royal Cottage, Holiday Home and Snooze Inn, which will surely go with your funds.
How to Reach
By Air
Madurai Airport is the nearest air link from Kodaikanal, situated at a distance of approximately 120 km.
By Rail
Kodai Road (65 km away) and Palani (80 km away) railway stations are the closest to Kodaikanal.
By Road
An efficient road network connects Kodaikanal with the major cities of Tamil Nadu, like Madurai, Chennai, Coimbatore, etc.
How to Cite