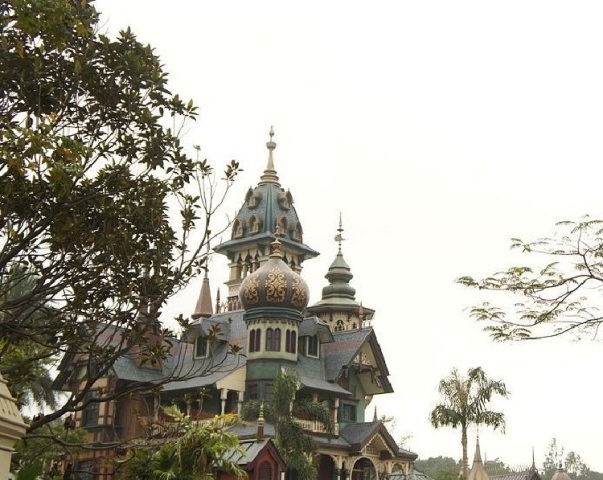 Image: By Block1997 (Own work) [CC-BY-SA-3.0 (http://creativecommons.org/licenses/by-sa/3.0)], via Wikimedia Commons
Opening Day: September 12, 2005
Resort: Hong Kong Disneyland Resort
Theme: Magic Kingdom
Operator: Hong Kong International Theme Parks
Area: 100 acres
Capacity: 34,000 visitors per day
Hong Kong Disneyland, as the name suggests, is a theme park in the Hong Kong city. It is the first theme park to be opened inside the Hong Kong Disneyland Resort, while being the fifth Disneyland-style Park in the world. The park will be under the ownership and management of Hong Kong International Theme Parks, an incorporated company under the joint ownership of The Walt Disney Company and the Government of Hong Kong. The theme park has been sited on a piece of land in Penny's Bay, Lantau Island, reclaimed from the sea.
Hong Kong Disneyland was inaugurated in 2005 and opened to public on 12th September 2005. In order to avoid the problem of cultural backlash, it has been made sure that Chinese culture, customs, and traditions form a part of the theme park. In fact, while designing and building the park, the rules of Feng Shui were also adhered to. Along with English, the cast members of the Disneyland also speak in Chinese, including Cantonese and Mandarin dialects, for the purpose of communication. Hong Kong Disneyland is the smallest Disneyland in the world right now.
Themed Areas
Just like the other four Disneyland, Hong Kong Disneyland also comprises of four themed lands, namely ‘Main Street, U.S.A.’, ‘Fantasyland’, ‘Adventureland’ and ‘Tomorrowland’. Though there is no ‘Frontierland’ as yet, there are plans to include it in the expansion projects to be taken up in future. Still, presently, there are 31 attractions in Hong Kong Disneyland. Let’s know more about the four themed lands.
Main Street, U.S.A.
The cartoon characters that form a part of the ‘Main Street, U.S.A.’ areMickey Mouse, Minnie Mouse, Donald Duck, Daisy Duck, Goofy, Pluto and Chip and Dale. This themed land boasts of the following attractions.
Adventureland
The cartoon characters that can be seen in ‘Adventureland’ areTimon and Prince Caspian. This themed land has the following attractions.
Fantasyland
The cartoon characters that are there in ‘Fantasyland’ areMickey, Minnie and Goofy, Winnie The Pooh, Alice, Snow White, Princess Aurora, Cinderella, Prince Charming, Belle, Marie, Mulan, Mushu, Woody, Jessie and Stitch. This themed land comprises of the following attractions.
Tomorrowland
You will find only one cartoon character in ‘Tomorrowland’ -Buzz Lightyear. This themed land includes the following attractions.
Accommodation

Though not much time has passed since the opening of the Hong Kong Disneyland, it has become one of the most popular tourist attractions of the city. Visitors coming to Hong Kong, especially those who come with their family and kids, make sure to arrange a trip to this theme park also. Keeping this in view, many hotels have come up in the area surrounding the park. The two main hotels in Hong Kong Disneyland’s vicinity are Hong Kong Disneyland Hotel and Disney's Hollywood Hotel.