T-shirts are more than just another form of clothing. The history of T-shirts has an interesting tale to tell. Read on and explore information on the origin and background of T shirt.

“Princess, having had sufficient experience with princes, seeks frog.” This humor quote printed on a white tee with an oil-painted slimy green frog gaping made me think of something. Don’t you all agree that T-shirts are no longer just an item of clothing? They are like mobile human billboards turning the street into a modern art gallery. From cute graphic T-shirts to wild and retro ones, from the ubiquitous "cat T-shirts" to the ones making political statements, a wardrobe without a stack of T-shirts piled up neatly is hard to imagine. Named after the shape of the garment’s outline, you would be surprised to know that it was included into the English dictionary only in the 1920s and entered into mainstream fashion not before 1960s. With the following lines, check out some more interesting information on the origin and background of T shirts. 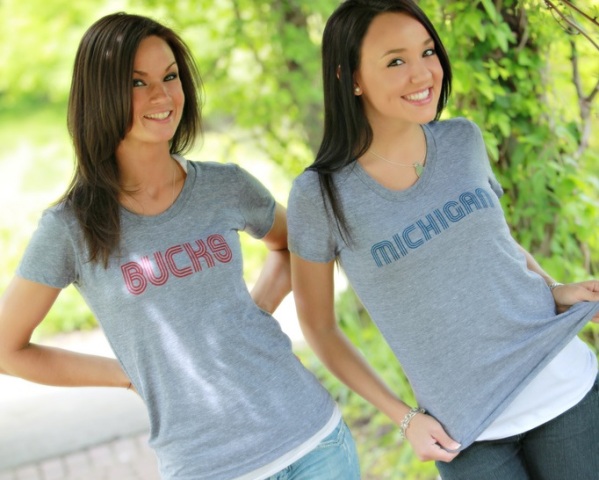 Image: [email protected]
Interesting Information On The Origin And Background Of T-Shirt
The origin of a T-shirt can be traced back to the industrial revolution in England and the eventual rise of international trade. Although the cotton used for bulk manufacture of T-shirts originally came from America, the history of T-shirts unfolded itself in Europe. After a relay of several experiments, cotton turned out to be the ideal material for underwear, and T-shirts were basically worn to prevent the hard, rough outer clothing from causing irritation to the skin of the wearer. The use of T-shirts gained popularity but strictly remained an undergarment, seen in public only on washing lines.
Soon after, the British Royal Navy wore them under their uniforms during World War I, while the American troops were still sticking to woolen uniforms even during the hot weather. They noticed European soldiers wearing lightweight cotton undershirts or rather T-shirts. This cool apparel caught on fast with the Americans and by World War II, both the American Army and the Navy included T-shirts in their uniforms. The soldiers battling in the hot tropics wearing only their t-shirts ended up on the cover of Life magazine and the T-shirt became a symbol, a hero’s icon!
Up until the 1950’s, T-shirts were still considered underwear, until John Wayne, Marlon Brando, and James Dean shocked Americans by wearing their “underwear” on T.V. Hollywood inevitably had the biggest impact on the classic tee with such iconic images as Brando's T-shirt in the 1951 'A Streetcar Named Desire' and James Dean's unforgettable white tee in 'Rebel Without a Cause' in 1955. These incidents made T-shirt wearing both cool and rebellious. This was followed by Elvis Presley and others, who added to the popularity of the once “underwear”. With time, T-shirt finally attained the status of fashionable, stand-alone, outer-wear clothing.
Besides, T-shirts were soon used to advertise merchandise, promote peace and protest racism. It became a universal messenger to display affiliations and attitudes. T-shirts became an indispensable part of the fashion industry, advertising field, politics, art, and souvenir business. For those of you wondering as to which was the first advertising campaign that tees promoted, “Wizard of Oz”, one of the most endured films of the yesteryears is the answer. It was conducted in the US, when Metro-Goldwyn-Mayer understood the great potential of the T-shirt as an advertising tool. Strangely, it was not until about twenty years later, that the large companies started using T-shirts as advertising tools. It was not until the middle of the 1960s that companies like Martini, Xerox, Playboy, Marlboro and McDonalds started printing their logos on shirts. Even Pepsi tried to create something similar to the Coca-Cola “Enjoy” T-shirt.
Be it in election campaigns (1960, Kennedy for President), protests and meetings (I hate apartheid), strikes, and the promotion of international organizations like Amnesty International, T-shirts ruled the charts. Probably the most famous political figure who has been reproduced on T-shirts is Ernesto Guevara, better known as Che. In the souvenir industry today, a portrait of Che Guevara recorded in 1960 can be seen on tees all over the world where souvenirs are sold. Today, the influence of this fun and convenient clothing has reached every high street and back alley across the planet. T-shirt has certainly stood the test of time and has a long way to go for sure.
How to Cite