The history and origin of the Indian garment, Saree, dates back to many centuries. Check out interesting information on the background of the sari.

One of the most sensual attires of a woman in India is undoubtedly the sari. It is a long unstitched piece of cloth, usually 6 yards long that is draped in a set pattern. It accentuates the curves of a woman and the mid-riff is usually exposed. However, the way of draping a saree may differ from place to place. The way it is draped in the north may be slightly different from how it is draped in the south. It is available in a plethora of fibers, designs and colors. The sari is usually worn with a blouse that covers the upper part of the body and underneath it is the petticoat, which helps to tuck in the pleats of the saree to hold it in place. 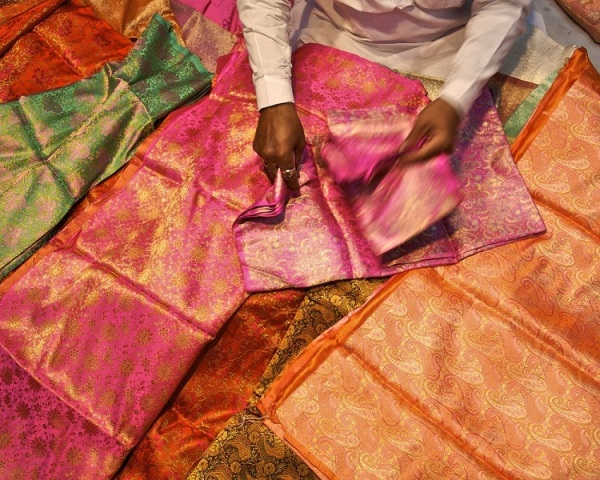 Image: Peter [email protected]
Interesting Information on the Background of Sari
The history and origin of sari seems to date back to the period of the establishment of civilization. Evidence states that women in the Indus Valley civilization used to cover themselves with a long piece of cloth, draped like a trouser. However, the word ‘sari’ originated from the Prakrit word ‘sattika’, which is mentioned in the early Buddhist literature. The word got shortened and was called sati, which further evolved into sari.
A statue recovered from the Indus Valley Civilization depicts a female priest wearing a cloth draped like a sari. The sari used to be draped in a way so that it divides the two legs and forms a trouser like attire. This was basically done to aid the temple dancers in their movements and also cover to their modesty. It is believed that the ‘dhoti’, which is the oldest Indian garment that was draped, is the foundation behind the sari. Till the 14th century, the dhoti was worn by both men and women.
The early statues of Goddesses show that the sari was draped in a sensual manner, like a ‘fishtail’, which was tied at the waist, covered up the legs and came in front of the legs like a decorative drape. During that era, the upper part of the body was either partially covered or was left bare. Down south in the state of Kerala, one can still see people wearing the traditional sari, which is a two piece garment, consisting of a lungi and a shawl. With the coming of the Muslims, the ghagra or the petticoat was discovered and clothes were stitched. Before that, Hindus believed piercing clothes with needles was impure.

The blouse came into existence with the Muslims and also the British. Since then, sari has come of age and now many new styles are being experimented with. But the main aspects of the sari like the blouse and the petticoat have been carried over in the modern times. Thus, sari is the perfect garment to enhance the beautiful curves of the Indian woman and has done so since times immemorial.