The word “spandex” is an anagram of the word “expands”. Read on about the history of this wonder fibre that has literally transformed the textile industry, for one, almost overnight.

Spandex is a synthetic fiber invented in 1959 at DuPont's Benger Laboratory in Waynesboro, Virginia. The word “spandex” is an anagram of the word “expands”. Spandex has become quite well known as a wonder fibre that has literally transformed the textile industry, for one. Since the first sample emerged, it has modernized various aspects of the garment industry. As the name suggests, it is particularly sought for its elasticity. Fashion has played a humongous role in widening the use of spandex all over the world. During the 70s and 80s, spandex leggings became extremely popular among many rock and heavy metal bands. The sudden embracement of spandex was because it remained stretchy and tight-fitting even after being worn for a long time.

Interesting Information On Origin & Background Of Spandex
During World War II, scientists took up the challenging task of developing synthetic replacement for rubber since the price of rubber fluctuated frequently and most of the rubber available was being used in war equipment. A scientist known as Bayer, a pioneer in polymer chemistry, produced the first spandex fiber on an experimental level. In 1952, he earned a German copyright for his synthesis. Later, scientists at Du Pont and the U.S. Rubber Company came up with the final development of this fiber and gave it a brand name Lycra. In 1962, they started the full scale manufacture of Lycra. Currently they are the world’s leading production company of spandex fibers. 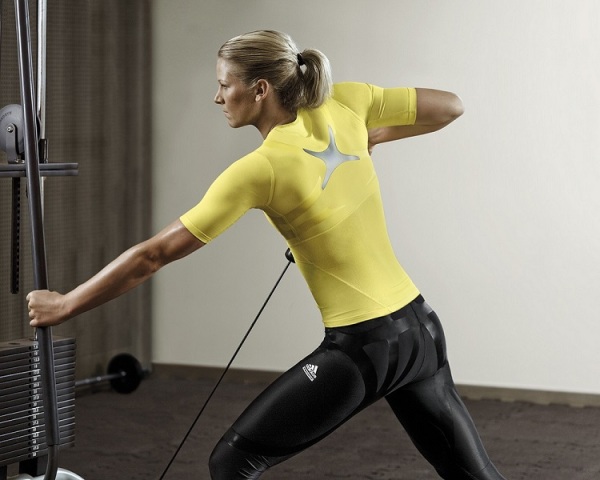 Image: [email protected]
Spandex is a synthetic polymer. Chemically, it is made up of long chain polyurethane, which is produced by reacting polyester with a diisocyanate. The polymer is converted into a fiber using a dry spinning technique. It is considered to be a great substitute for rubber because comparatively it is stronger, lighter and more versatile. Another great quality of spandex is that it does not get affected by exposure to sweating, ointment, body oils or detergents, though they are vulnerable to a variety of things like light, heat, atmospheric contaminants and chlorine. Thus, stabilizers are added to protect them. To protect it against light degradation, UV (ultraviolet) screeners such as hydroxybenzotriazoles are added. Spandex is white in color when first produced. Later colorants are added to improve its visual appearance. Normally dispersed and acid dyes are used. If spandex fibers are interwoven with other fibers like nylon or polyester then special dyeing methods are used.
Spandex was first used in ladies garments such as corsets and other inner wear. Back in those days, women thought it was important to wear a corset and treated one as indecently dressed if clothed without it. Now spandex is on the primary edge of fashion for both men and women. The reason behind a sudden fetish about spandex besides the rock heavy metal music is that the garment forms a second skin on the wearer’s body. By wearing the skin-tight garment, the wearer can appear naked or coated in a shiny material like paint. The ultra tight fit of the garments may also be seen as a sexual expression. Superheroes, superheroines and supervillians in comic books today are illustrated wearing costumes made of spandex or similar material. A lot of sportswear, swimsuits, ski pants, belts, slacks, leggings and other garments and accessories are made from spandex today.
Today in Europe and many other parts of the world, it is known as “elastine”. The quality of spandex has improved tremendously compared to when they were first made. For example, scientists have found that they can develop fibers with even better stretching quality by changing prepolymers. Today’s technology and different areas of research will continue to help improve Spandex quality and help produce it more efficiently.
Interesting Facts About Spandex
Soon spandex will take over the market of stylish furniture. It has already entered the auto market where it allows door panel fabrics to elongate and stick tightly to the door.
How to Cite