Sports bras are the ones that are especially made for women who indulge in sports. To know what is a sports bra and what is its origin, read on.

As the name suggests, sports bra is special lingerie for women who indulge in sports. It is designed keeping in mind the comfort of sportswomen. Sports bras provide firm support to the breasts. They are particularly worn during vigorous exercise, due to which the breasts may move uncomfortably. While exercising, the movement of the breast is bound to cause discomfort and embarrassment, which is why sports bra have become an integral part of sportswomen. These bras are firmer than the regular bras and control unnecessary movement. 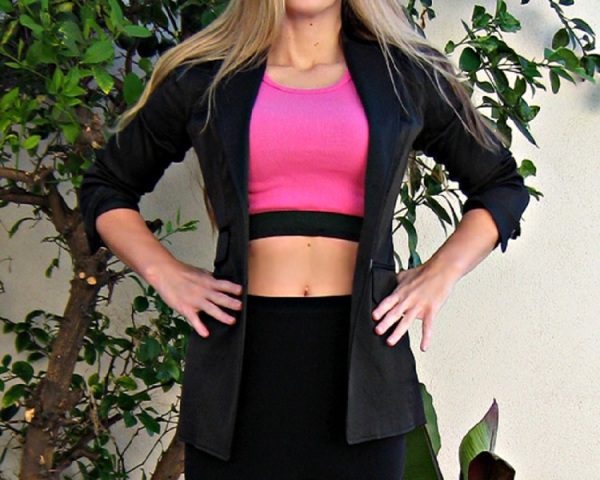 Image: ...love [email protected]
Sports bras also reduce the risk of damage to the ligaments of the chest during high impact exercises, such as jogging. In appearance, a sports bra resembles a tank top, with half bottom cut off. The origin of sports bra dates back to 1977. It was presented for the first time by Hinda Miller and Lisa Landahl, who cut up a pair of jockstraps and sewed them together into a bra. Later, it was marketed as the Jogbra. A sports bra is mainly made of Lycra, which is a stretchable absorbent fabric, allowing sweat to stay away from the skin, thereby reducing irritation.
The variations to a sports bra include use of gel and water pads, silver fibers and air bags. The stitch-less sports bra, which was molded, compressed and shaped, was made by Wacoal. Apart from that, there are a number of bras that are knitted in circular patterns, providing varying stretch and support. Sports bras are classified into either encapsulation brassieres, with molded cups, or compression brassieres that restrict movement, by flattening the breasts. The encapsulation brassiere is considered ideal for reducing discomfort, while the latter is used for modesty.
Types Of Sports Bra
Hind Women’s Motion Sensor Bra
This sports bra is for the curvy shaped woman. It offers good support, sans the bound up and stifling feeling that some other sports bras can give, making them uncomfortable to wear.
Front Zipper Sports Bra
This type of sports bra also offers good support. The shaped cups allow breathing room to the wearer. Another comfort provided by this bra is that you can easily remove it, without pulling it over your head. It is a good choice for those who rate ease and comfort as one of their priorities, while choosing a bra.
Friction Free Sports Bra
This bra is great for those who use their upper body a lot in their sport. It offers good freedom of movement with little chaffing and rubbing and it’s seamless. Friction free sports bra is preferred by women who participate a lot in sports.
Response Bra
Response bra is also seamless, just like the friction free bra. It is good for low impact activities, as it can impart a flattering shape to the breasts.
Hotline Women’s Top
This sports bra is for the fashion-conscious women. The bra is pretty comfortable to wear, in spite of being very fashionable. The ability to move and breathing space is also provided.
How to Cite

How To Buy A Bra

How To Choose Men’s Sports Watches