Sopron is the dental capital of the world, but you are sure to find much more that floss and fillings there. Find out what are the things to do and places to see in Sopron.

Location: On the Northern border of Hungary, near Lake Neusiedl 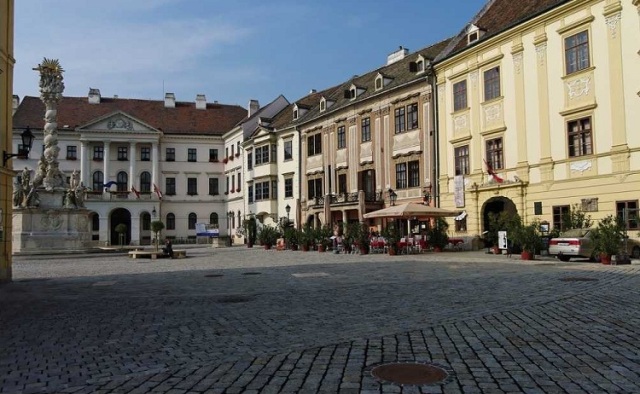 Image: Emmanuel [email protected]
Language: German, Hungarian
Time Zone: UTC+1
Driving: Right Side
Attractions: Tuztorony, Loyalty Gate, Storno-House, Kecske Templom, Old Synagogue
Located on the Austrian Border, the small city of Sopron is admired for its old world charm. It is a bilingual city, with both Hungarian and German being prominent languages. The beautiful baroque-styled buildings that were built in the 1700s add a medieval charm to the ancient roman splendor of the city. Sopron receives majority of its business from Austria. Situated closer to Vienna (70km) in Austria and Bratislava (77km) in Slovakia than to Budapest (Hungary’s Capital), the city nevertheless is still close to its Hungarian roots. In fact, it is so loyal to Hungary that it is often called Civitas Fidelissima (The Most Loyal Town). Sopron's German-speaking culture and heritage was highly suppressed during the Cold War, but is now fast resurging. The city is very close to the Iron Curtain, which was the symbol of European division up until 1991, when the Cold War ended. In the following lines, we would take you through brief tour of this city and tell you the most exciting places to see and things to do when you are in Sopron.
Places To See In Sopron
The Fire Tower (Tuztorony)
The number one attraction in Sopron is the Tuztorony. It is the emblem of Sopron. The building itself is unique, since its foundations are Roman, while the lower square base is from 14th century. The cylindrical center with the Tuscan arcade is from the Renaissance age. The upper part is a clock tower with a multi-storied onion dome which was added from 1681-82, following a massive fire in the city. This 222 ft high tower provides tourists wonderful view of the city.
The Loyalty Gate
To the south of the fire tower is the Loyalty Gate, presented to the town in 1921 by the government of Budapest. Sopron was part of the counties that were initially awarded to Austria in the Treaty of Saint Germain in 1919. However, after local unrest and a local referendum on December 14, 1921, with 65% voting for Hungary, Sopron (along with eight villages close by) was ceded to Hungary. The gate was presented to mark this occasion. Every year December 14 is a holiday to mark the occasion.
Storno-House (Museum)
Standing next to the tower is the Storno House, one of the finest palaces of the town. Built in the Middle Ages, the museum boasts of housing a diverse collection of collectibles. Right from the old porcelain artifacts, to ancient furniture, paintings, guild shops, traditional wood carving and ceramics relics, the museum is sure to leave you amazed and startled. However, it is not just the lavish interiors that are going to weave the magic. The museum flaunts of having Baroque exterior that dates back to the 18th century. The building also has a lovely courtyard that is formed from beautiful Renaissance arcades.
Kecske Templom (Goat’s Church)
At the southern side of City Square is the Goat's Church or Mary Church (Kecske templom). The popular legend related to this temple is of a treasure, which was scraped out of the ground by a goat and was buried when the church was built. The church was built between 1280 and 1491. There is well preserved Gothic decoration on the church, while the facade and interior are in Late Baroque/Rococo style. Following the dissolution of the Franciscan order in 1787, the church was used as a barn, before it was passed on to the Benedictines.
Old Synagogue
One of the oldest synagogues in Europe, from 1300-20, it was the first house of prayer of the Jewish community in Sopron. Since non catholic houses of prayer were not allowed in the city; the synagogue was styled in such a manner that the actual prayer house was located in the interior, while the front side was used as shops. Under a high pyramid roof, the Old Synagogue consists of a large two-storied prayer hall, a prayer hall for women (joined to one other only by observation slits) and the ritual bath. The synagogue with both prayer halls was converted into residential houses and remained so, until after the Second World War, when it was restored.
How to Cite