Though tattoos are meant to stay for a longer period of time, some tattoos are made for those with fickle minds! Here are some examples of semi permanent tattoos.

Most of us need to think ten times before getting a tattoo done – a permanent one, that is to say. What if we grow tired of the same design that we are madly in love with right now? What if it begins to look ugly on our skin? Also, there may be those who, in a drunken stupor or in a bid to get one up on a friend who challenged us, would get a permanent tattoo and may not know what to do with it later. For all such people, there is good news; there is a range of temporary tattoos available that will last from anywhere between a few hours to few months. They are easy to apply, painless as compared to the permanent ones, and can either be easily removed or will fade away on their own. Here’s a list of a few media that offer temporary tattoos. 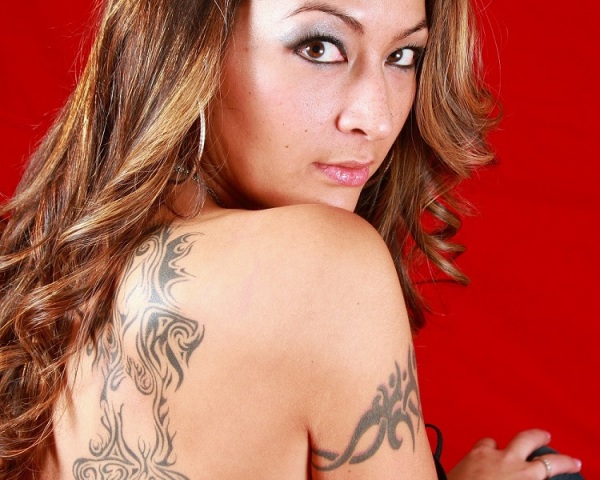 Image: Alaskan [email protected]
Temporary Tattoos
Here are some media by which you can get semi permanent tattoos:

Henna
Contrary to what many might think, henna is not the same as mehndi – it is, in fact, the substance (dried leaves of Henna plant) that is used to make mehndi and other inks. Henna tattoos are safe, fast, and are often regarded as the best medium for semi permanent tattoos because henna is a natural substance. Quite a number of beauty stores will sell a henna tattoo pen; you can even buy it online, if that is more convenient for you. You can draw sharp and fine lines using this semi-permanent tattoo ink pen, in black color. This type of tattoo will last for around 2-4 weeks.

Stick-On
These types of tattoos, as the name suggests are to be stuck to the body. They are available in the form of drawings on to a piece of greaseproof paper that can be applied to the body part with the help of just a little bit of water. Many such tattoos are available with bubblegum wrappers (!) but they can also be purchased independently. They do not last longer than a week and to look horrific when they begin to fade, though they look nice and fresh when you begin with them. You will have to use an acetone nail paint remover to get rid of them. However, watch out, for many of the materials used in them are not safe for the skin.

Temporary Airbrush Tattoos
These tattoos are applied to the skin surface without causing any damage to the skin. A stencil is placed on the body area, and the tattoo ink is put on the skin using an airbrush. It resembles a permanent tattoo pretty good, and can be gotten rid of using an oil or alcohol based product. It doesn't last too long and washing or bathing the skin will result in faster removal of the tattoo. However, you can increase its life by applying baby powder to the skin area, when a temporary airbrush tattoo is freshly done.

Mehndi
As we all know, mehndi is India’s beloved version of body art. It is an integral part of weddings and ceremonies. Over the years, however, it has gone beyond the palms and feet and also beyond festivals and special occasions to penetrate into the true philosophy behind any form of body art – to celebrate the human form. From hands and feet, it has spread to the arms, back, even the ankles, and the hip. It is the most natural way to body art and also the safest. It lasts for a good two weeks, if left to stand for a long while.

Ball Point Pens
Who wouldn’t be able to afford this one? Though tattoos made with ballpoint pens may not last for more than a few hours, they almost always look good, because a ball point pen is often precise. This might, however, spread onto clothes, as the ballpoint pen uses ink that spreads when warm. It may not be safe for the body too, so exercise caution.