Organic Khadi, once popularized by Mahatma Gandhi, has once again caught the fancy of people in India.

Khadi has been associated with Mahatma Gandhi since a long time. He was the one who introduced the fabric as well as popularized it amongst the common masses, during his struggle for the freedom of his motherland, India. With time, the popularity of the fabric diminished and it slowly fell into oblivion. However, the past couple of years have seen people once again turning towards not only khadi, but also organic khadi. Organic Khadi is totally devoid of any synthetic chemicals, fertilizers or insecticides, usually used while growing khadi. However, the problem with the production of organic khadi clothes is that the raw material is available only in Maharashtra and Madhya Pradesh. This is because the majority of farmers are still unaware of the concept. Though the market for organic khadi is not too huge, it is expanding at a fast pace. The time is not far away, when majority of people will be wearing clothes/dresses made of the environment-friendly fabric. 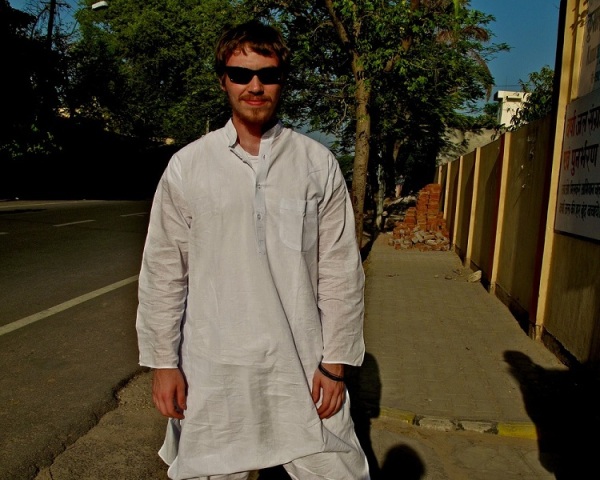 Image: Austin [email protected]
World Scenario
Tune into the world clothing scenario and you would find that organic khadi is the latest buzzword. Not only Indian consumers, but foreigners have also started turning towards the material. Standing as a testimony to this recent trend is a US-based fashion designer, who has opened up a fashion house in Jaipur, for exclusively catering to the demand for organic khadi outfits. The fashion house has a wide range of clothes, all of which have been made from the organic fabric. As per the designer, foreigners have started realizing the medicinal values of wearing organic khadi. It is said to help fight skin infection and high blood pressure.
Benefits Of Organic Khadi
Reducing Allergens
For those with sensitive skin, dermatological conditions can worsen by wearing synthetic clothes. This is mainly due to the presence of pesticides, herbicides, chemicals and artificial dyes in them. Organic khadi, on the other hand, is free of chemicals and pollutants. Such clothes are essentially made from bamboo plant and are antimicrobial in nature.
Environment Friendly
Organic khadi is totally environment friendly. Organic materials are grown toxin-free, reducing the amount of toxic chemicals, we ingest and release into earth. This is why so many foreigners have started demanding organic khadi outfits. In contrast to this, chemically made clothes have the presence of chemicals in the fibers of the material. However, the sad tale doe not end here, as the toxicity saturates the ground, which results in toxic food production, contaminated drinking water and atmosphere.
Cost Effective
While it might be a little depressing for shop-a-holics, but it is fact that organic clothes tend to last about 10 times more than regular ones. For instance, a regular white tee loses its shine and luster after about 12 to 15 washes. However, a white shirt made from organic khadi tends to last even after 100 washes. Also, khadi is naturally fade-resistant, which means that the color of your shirt, even after 50 washes, would be as good as it was when you first wore it.
Superior Quality
Regular cotton is heavily processed after it is harvested and ripped off its natural waxes.  Instead, synthetic wax is added to the cloth, along with soil and flame retardants, bleaches and chemical softeners. On the other hand, organic cotton retains its natural wax and therefore its characteristic shine, weight and smoothness. For those who fear tanning, organic khadi blocks the UV rays and helps keep moisture away from the skin
How to Cite