Monica Bellucci is an Italian model, and a popular film actress. Check out more information on Monica Belucci, in this brief biography & profile. 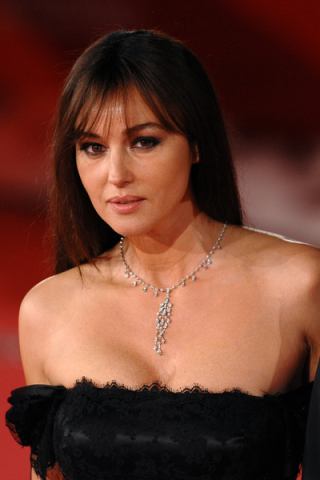 Born in: Città di Castello, Umbria, Italy
Nationality: Italian
Career: Model and Actor
Monica Bellucci is a very popular Italian model, who got involved in the modeling industry at a very tender age. She made her debut in the film industry with an English-language film, ‘Bram Stoker's Dracula’, starring as the Dracula’s Bride. She is mainly known for her role in two ‘Matrix’ movies, ‘The Matrix Reloaded’ and ‘The Matrix Revolutions’. Bellucci has done films in Italian, French, Spanish and English languages, along with Aramaic. She is presently married and also has a daughter. Bellucci has a wax statue in the Grevin Museum in Paris.
Childhood
Monica Bellucci was born on 30th September 1968, in Città di Castello, Umbria, Italy. She is the daughter of Luigi Bellucci, the owner of a trucking company, and Maria Gustinelli, a painter. Bellucci started modeling at the tender age of 16 years only, when she was attending to the Liceo Classico. Initially, she started pursuing the career of a lawyer and did modeling only to finance her tuition at the University of Perugia. However, the glamour and stardom beckoned her and tempted by it, she gave up her law studies.
Modeling
It was in the year 1998 that Bellucci shifted to Milan, one of the main fashion centers of Europe. After reaching there, she signed with Elite Model Management and by next year, had become one of the most known faces of the fashion circuit in Paris and even gained a major foothold in New York. Amongst her most successful and popular campaigns have been those for Dolce & Gabbana and French ELLE. In New York, Bellucci's modeling career is managed by Elite+. She is presently the face of a range of Dior Cosmetics and has also signed with Storm Model Management in London.
Entertainment
The decade of 1990s saw Bellucci entering the film industry. She made her debut in the year 1992, by starring in a major English-language film ‘Bram Stoker's Dracula’. Thereafter, she was seen in only two movies L'appartement (1996) and Dobermann (1997), till end-1990s. Bellucci started the 21st century with ‘Franck Spadone’, ‘Under Suspicion’ and ‘Malèna’ (2000). It was the last movie that made her a known face amidst the audience and also gained her worldwide recognition.
Brotherhood of the Wolf (2001) and Irréversible (2002), which came in subsequent years, also added to her fame. In 2003, Bellucci was seen in ‘Tears of the Sun’, ‘Ricordati di me’, ‘The Matrix Reloaded’ and ‘The Matrix Revolutions’. The last two films, in which she played the part of Persephone, are amongst her most successful ones till date. The next year, she was applauded for her portrayal of Mary Magdelene in ‘The Passion of the Christ’. In 2005, she starred in the fantasy film ‘The Brothers Grimm’.
The next year saw Bellucci performing in the movie ‘Manuale d'amore 2 - Capitoli successivi’. Her latest films are the ones done in 2007, which include ‘Shoot 'Em Up’, ‘Heart Tango’ and ‘Le deuxième souffle’. She was supposed to portray Indian politician Sonia Gandhi, in the biopic ‘Sonia’, but the project was later abandoned. Bellucci has also been involved in voice-overs, voicing Kaileena in the video game ‘Prince of Persia: Warrior Within’ and ‘Cappy’ for the French version of the animated movie ‘Robots’ (2005).
Personal Life
Bellucci was engaged to actor Nicola Farron, from 1989 to 1995. However, she is married to actor Vincent Cassel, who has starred with her in a number of movies. The couple also has a daughter - Deva, who was born on 12th September 2004. Bellucci speaks Italian, French and English quite fluently and is also semi-fluent in Spanish. She was featured on the cover of February 2001 Esquire Magazine's feature on Desire. In 2004, she was rated as #1 in the ‘100 Most Beautiful Women in the World’ annual list, compiled by the popular website ‘AskMen.com’.
Filmography
1992 - Bram Stoker's Dracula
1996 - L'appartement
1997 - Dobermann
2000 - Franck Spadone, Under Suspicion, Malèna
2001 - Le Pacte des Loups (aka Brotherhood of the Wolf)
2002 - Astérix & Obélix: Mission Cléopâtre, Irréversible
2003 - Tears of the Sun, Ricordati di me, The Matrix Reloaded, The Matrix Revolutions
2004 - The Passion of the Christ, She Hate Me
2005 - The Brothers Grimm, Combien tu m'aimes?
2006 - Manuale d'amore 2 - Capitoli successivi
2007 - Shoot 'Em Up, Heart Tango, Le deuxième souffle
How to Cite