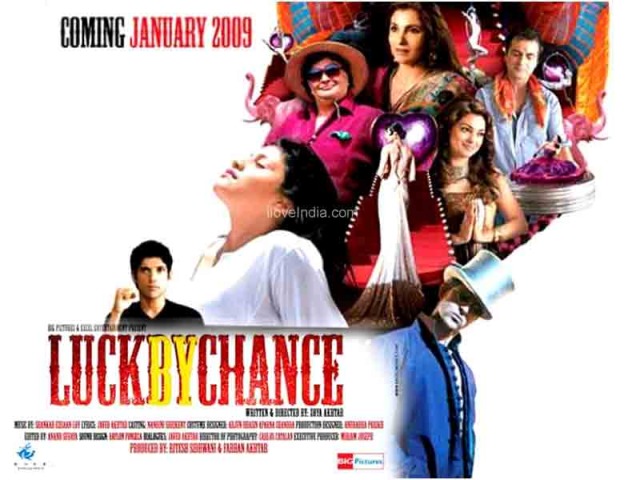 
Thank God Zoya Akhtar did not rely merely on luck while directing 'Luck By Chance'. The film did turn out to be good and that too not merely 'by chance'. In others words, we could see Zoya's as well as the actors talent oozing out throughout the movie. The story of two struggling actors, who want to make it big in Bollywood, did manage to make us sit back and take notice. It gives us an insight into the workings of Hindi Film Industry, where luck plays a major role and fates are decided every Friday morning.
'Luck By Chance' alternates between satire and humor, not even once trying to get the slapstick edge. The cameos have been used beautifully, with actors making the audience laugh at their own expense. The screenplay is excellent, with credible characters being used throughout. The movie lets you see all the major aspects of Bollywood, right from acting schools to drama-theatre to corporate studios. The editing is crisp, while the production design and the costumes help impart the perfect 'filmy' look to the whole setting. Right from the start, Zoya has given the typical 'Bollywood' feel to 'Luck By Chance'.
Almost all the characters in the movie have been given a negative shade, but not in the extreme. In others words, the movie has grey characters, just as they exist in the real world. The end is a bit of a surprise, unexpected, but (thankfully) not too regressively realistic. 'Luck By Chance' has excellent performances by Farhan Akhtar, Konkana Sen, Rishi Kapoor, Dimple Kapadia and Hrithik Roshan. Isha Sharvani is doing what she does best - look beautiful. In short, the movie is 'almost' a realistic narration of Bollywood, which can easily corrupt the most humble being. Our advice - watch this movie, it's surely worth your money!
Luck By Chance Pre-release Review
Zoya Akhtar’s directorial venture “Luck By Chance” is all set to hit the silver screens across India, on 30th January 2009. Released under the banner of 'Excel Entertainment', the film boasts of an impressive star cast. Farhan Akhtar, Rishi Kapoor and Konkona Sen Sharma are accompanied by Isha Sharvani, Sanjay Kapoor, Dimple Kapadia, Juhi Chawla and Aly Khan. Hrithik Roshan makes a special appearance in “Luck By Chance”. Javed Akhtar has provided the lyrics to the songs in the movie, composed by Shankar-Ehsaan-Loy.
The story of the film “Luck By Chance” revolves around youngsters, aspiring for name and fame in Bollywood. Sona Mishra (Konkona Sen Sharma), a highly ambitious girl, arrives in Mumbai to make it big in Bollywood. She lives in a rented apartment and spends her maximum time with a group of loyal friends, who also wish to establish themselves in Bollywood. Vikram Jaisingh (Farhan Akhtar) is a young and handsome guy, who also shifts his base from Delhi to Mumbai, to chase his acting dreams. In the process of getting what he wants, Vikram manipulates the situations tactfully.
Sona begins to develop a soft corner for Vikram, as he shows attention and affection to her. Consequently, they fall in love with each other and develop a romantic relationship. Romy Rolly (Rishi Kapoor) is a Punjabi producer, who works with some of the big stars of Bollywood. Though successful, Romy believes in superstitions and the role of luck in life. Rolly plans to introduce Nikki Walia (Isha Sharvani) in his upcoming film. Nikki is the teenage daughter of Neena Walia (Dimple Kapadia), superstar of the 70's.
Rolly casts superstar Zaffar Khan (Hrithik Roshan) as hero of the film. Luck seems to be favorable for Vikram, as havoc spreads on the sets of Rolly’s upcoming film. Subsequently, Vikram is called for an audition and makes use of this opportunity to the fullest. Will Vikram be able to make it as a superstar? Will his success come in the way of his relationship with Sona? The movie “Luck By Chance” lets the audience get a glimpse of the life in Bollywood, in which kismet plays a significant role.