'Delhi 6' is the third directorial venture of Rakeysh Omprakash Mehra, with Abhishek Bachchan and Sonam Kapoor in the lead. Explore the star cast & music review of Hindi film 'Delhi 6'. 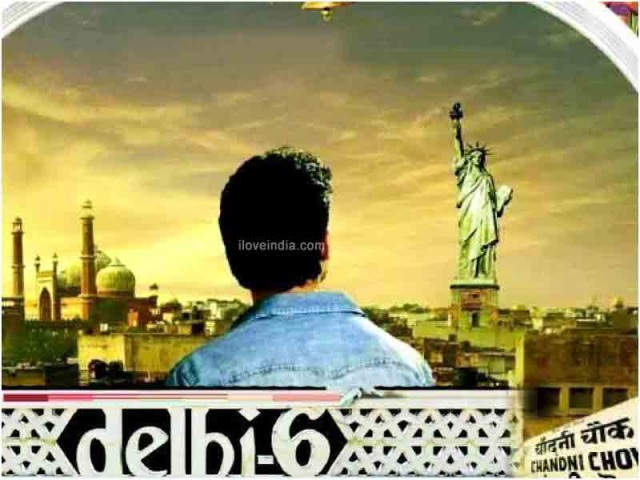 
First things first - 'Delhi 6' is not 'Rang De Basanti (RDB)'! Do not go to the movie hall expecting a repeat performance by Rakeysh Omprakash Mehra. Now, now, we didn't say that the movie is bad. It's just that it doesn't come anywhere near RDB. 'Delhi 6' — about the varying aspects of Dilli and the different facets of its people — reminded us of 'Swades' quite a lot. The films starts on a good note, intermingling a number of 'different flavored ' plots. However, as the story moves on, the plots get all muddled up and this is where the problem comes in.
One hour into 'Delhi 6' and you get confused about the main track of the movie. Too many characters and too many plots create utter confusion. On the other hand, the track of an NRI coming to India and falling for the sweet and bubbly girl-next-door is quite clichéd. There are exemplary moments in the movie, but few and far between. However, Rakeysh surely managed to portray both the sides of the capital city - lighter as well as sinister, well. The characterization of Abhishek as well as Sonam is poor and their love story mostly falls flat.
Another aspect of the movie that could have been worked upon is the climax. It was too abstract and difficult to comprehend. On a positive note, A.R. Rahman's music was at its very best, while Prasoon Joshi impressed us with his lyrics. Even the cinematography was excellent, giving us an insight into the by-lanes of Old Delhi. Performance-wise, Abhishek was not bad, while Sonam was likeable. However, Om Puri, Pawan Malhotra, Vijay Raaz, Deepak Dobriyal, Divya Dutta and Cyrus Sahukar were tremendous in supporting roles. Watch 'Delhi 6' on DVD and you won't miss out on much!


Delhi 6 Pre-release Movie Review
After basking in the success of 'Rang De Basanti', Rakeysh Omprakash Mehra vanished from the scene for two complete years. Now, he is back in action, this time with a black comedy - 'Delhi 6'. The movie has been produced by Rakeysh Omprakash Mehra, along with Ronnie Screwvala, and will be released under the banner 'UTV Motion Pictures'. A. R. Rahman is the music director, with Prasoon Joshi providing words to his tunes. 'Delhi 6' is scheduled to hit the theaters across Indian on 20th February 2009.
The star cast of 'Delhi 6' boasts of names like Abhishek Bachchan, Rishi Kapoor, Atul Kulkarni, Divya Dutta, Sonam Kapoor, Om Puri, Pavan Malhotra and Supriya Pathak. The movie is based on the age-old trait of hypocrisy, which makes people judge others quickly, without looking at their own inner self, their weaknesses even once. In this world, where actions and words follow two entirely different concepts, people often end up taking advantage of each other's naivety. 'Delhi 6' tries to explore all this and more!
The movie revolves around the life of Roshan (Abhishek Bachchan), a young American guy, who is of Indian origin. However, he has never ever been to India and neither is he aware of its myriad facets. He has an ailing grandmother, who wants to take her last breath in her own country. So, Roshan leaves on a quick trip to India, to drop off his grandmother. Little does he know that it is going to be one of the longest journeys of his life - a journey within! As Roshan lands in India, he starts taking in its sights and sounds, its food and culture, its religion and beliefs.
As he settles his grandmother in her home, he interacts with her neighbors, mixes with them and becomes a part of the community. However, he is unaware of the fact that the people, who seem so jovial and full of life, have a wicked side as well, which plans to take advantage of his naive nature. The ancient walled city of Delhi serves as the backdrop of all this drama. It is representative of the capital city of India, its chaos, people, religions and myriad beliefs. With the pincode of the old city being 110006, its residents proudly call it Delhi 6.