Crete is a Mediterranean island that forms one of the thirteen peripheries of Greece. Read further and get to know some fun and interesting facts about Crete.

Crete is an island that forms one of the thirteen peripheries and administrative divisions of Greece. The largest Greek island, it spreads over an area of approximately 8,336 sq km (3,219 square miles). Crete is a mountainous island, which has Lefka Ori (White Mountains) in the west, Mt Idi (Psiloritis) in the center and Mt Dikti in the east. One of the attractive and mesmerizing islands on Earth, Crete is more like a country of its own. People in Crete follow customs and practices that are different from Greece and have great regard for music. The north coast of Crete, where all the cities are located, is its main tourist area. Here, you will also find some of the most beautiful and isolated beaches in the world. Natural sites and historical monuments form the other major tourist attractions of the island. In the following lines, we have provided some more interesting information about Crete. 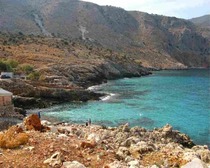