Billu Barber is a modern adaptation of the platonic relationship shared by Krishna and Sudama. Check out the review of film Billoo Barber. 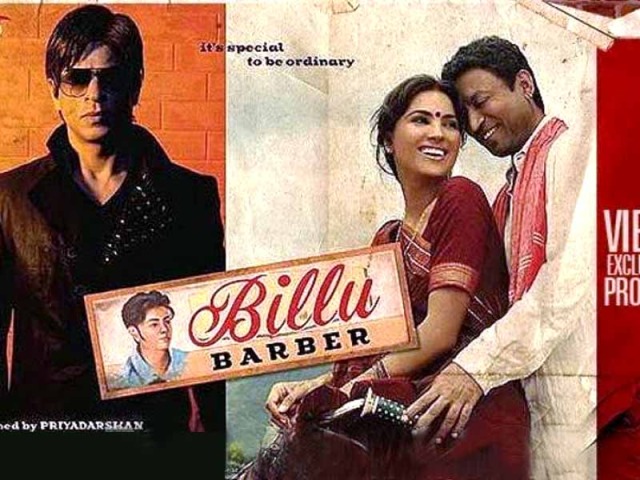 
After watching Billu, one can only say that Priyadarshan has failed to create interest in this remake. And not only its title got short after the controversy, but rating also got squat. The imaginary village setting is actually cinematic and its dwellers speak in a restrained manner as if it is a school play. The movie with bland plotline appears to be just bearable with the sensuous beauties — Deepika, Priyanka and Kareena.
This faded attempt of portraying the modern folklore of Krishna and Sudama is not convincing at all. On the whole, Irrfan Khan (as Billu) has acted well which he always does; however for Shah Rukh Khan, it's just a testimonial to himself. Priyadarshan and Mushtaq Sheikh have done good screenplay, even if satirically they only nick out scenes from the novel Malayalam film Katha Parayumpol. Most of the scenes are a ditto imitation of the original movie with no innovation.
The poor Billu, who could not even arrange for two meals a day for his wife and children, suddenly gets the public eye when villagers come to know that Sahir Khan and Billu have been childhood friends. By chance, Sahir Khan ends up shooting in the backyard of Billu. The star-struck villagers — be it the village moneylender (Om Puri) or the school principal (Rasika Joshi) — approach Billu to cash his contacts in meeting the super star. However, Billu is very timid to approach Sahir because of the vast difference in their social status.
The story appears to be one-dimensional all through, showing only the barber’s starry influence. The movie has failed to create the right aura of the film industry as well as the village. The Bollywood backdrop is marked by some surplus item numbers and mechanical action sequences, which are unrelated to the plot. Rajpal Yadav, Om Puri and Asrani have become very regular to Priyadarshan films, so it is difficult to discriminate them from their previous works.
The movie has some technical faults, like Lara Dutta is always wearing eyeliner and lip-gloss when there is nothing to eat for the family; Sahir’s film scenes hardly require any villages setting; it never gets clear how the villagers come to know about the friendship of Billu and Sahir as Billu never says it publicly, etc. Moreover, the terms barber and hajam are not muted in dialogues, but in songs; as if they sound offensive only when sung.
To conclude, the movie tries to resolve its patchy plot with an emotionally driven climax, which simply appears to be an ending of too much coincidence and convenience. The familiarity between Billu and Sahir is not recognized for once throughout the film and surfaces only in the last scene. And discontentedly, the film Billu doesn’t even finishes on a moral note, albeit it had enough scope for it. So, it's better to wait and watch the movie when the DVD is out rather than spending money in multiplexes.
Billu Barber Pre-release Review
Waiting for yet another Shahrukh flick? There is good news - you would not have to wait much to see The King Khan, as his latest flick - ‘Billu Barber’ is expected to hit the theaters in the first quarter of 2009. A remake of the Malayalam film ‘Kadha Parayumbol’, this comic movie has been produced by SRK’s Red Chillies Entertainment. It stars Shah Rukh Khan, Irrfan Khan, Lara Dutta, Om Puri, Rajpal Yadav and Asrani as its main characters. The news is abuzz that Kareena Kapoor, Katrina Kaif, Priyanka Chopra and Deepika Padukone will also be seen in the movie, in guest appearances.
While the lyrics for ‘Billoo Barber’ have been written by Gulzar, Pritam is the music director for this humorous movie. It is for the first time that Shahrukh and Irrfan will be sharing screen space. With the likes of Om Puri, Rajpal Yadav and Asrani in the movie, rest assured that you are going to have a fine taste of comedy. The film is a tale of two friends, a modern adaptation of the platonic relationship shared by Krishna and Sudama. Billu Barber would be Priyadarshan's 75th film as a director.
In the movie, Irrfan Khan plays the title role of Billu Barber (present-day Sudama); Shahrukh will be seen as Sahil Khan (present-day Krishna). The movie revolves around the life of Billu Barber, his wife (Lara Dutta) and their two kids. Billu is a village barber experiencing a slow down in his business, primarily because he fails to adapt to the changing fashion trends. It is during this time that a film unit comes to his village, with superstar Sahil Khan as the hero. Billu tells everyone in the village that Sahil is his old friend. Instantly, the villagers take a keen liking to Billu.

All the villagers want to meet the Sahil Khan and believe Billu to be the perfect person, who can help arrange a rendezvous with him. Now, Billu tries to meet the actor, but is unsuccessful in the attempt. This makes everyone suspicious about his claim. Not only the villagers, but even his family members believe that he was lying about his friendship with Sahil. What will Billu do now? Will he be able to meet his friend? Will Sahil recognize Billu? Will Billu's family members and villagers believe him again? The answers are for the viewers to unveil as the movie hits the theaters in 2009.