Nagarjuna is one of the shinning stars of Telugu Film Industry. Read this biography to know about the childhood, profile and filmography of Nagarjuna. 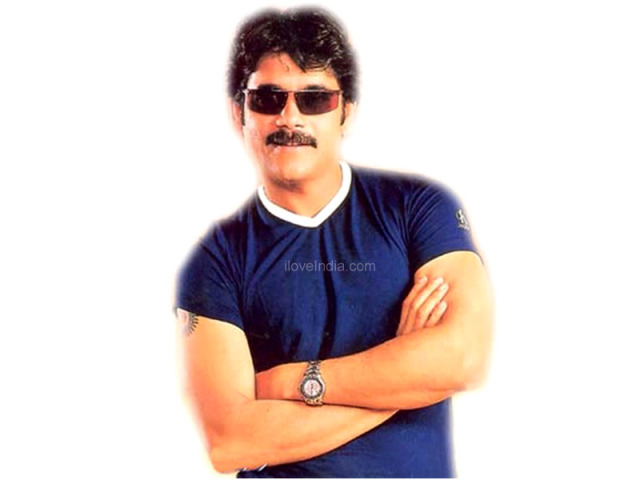 Born In: Andhra Pradesh
Career: Actor, Film Director and Producer
National: Indian
Akkineni Nagarjuna or simply Nagarjuna, is one of the gems of the Telugu Film Industry (a.k.a. Tollywood). Nag, as he fondly called, is the son of the veteran actor, Akkineni Nageswara Rao. His magnificence and on-screen charisma is a spectacular-watch for all the movie buffs in South India. In a career expanding to four and a half decades, this Yuva Samrat (a title given to Nagarjuna by his fans) has come to be regarded as one of the finest actors, film directors and producers of Tollywood. Nagarjuna is known for his ace acting skills and instinctive nature. Right from the power-packed performance in front of the camera to handling almost all the departments behind the scenes, Nagarjuna has proved his artistic excellence in almost everything related to film-making.
Early Childhood
Akkineni Nagarjuna Rao was born on August 29, 1959. He is the son of Telugu actor Akkineni Nageswara Rao and his wife - Annapurna Akkineni. Nag did his schooling from Hyderabad Public School and completed his senior secondary from Ratna Junior College. Thereafter, he attained a degree in mechanical engineering from the College of Engineering, Guindy (Chennai). Nagarjuna’s academic record was further enhanced with a Master's Degree in Automobile Engineering from the University of Louisiana, Lafayette.
Debut In Tollywood
Nagarjuna stepped into the world of entertainment with the movie 'Vikram' (1986), a remake of the Hindi film - 'Hero', starring Jackie Shroff. Four films old, Nag tried his hand at tragedy, playing the protagonist for a tragic love story - 'Majnu'. The movie 'Collector Gari Abbayi' saw the father-son duo sharing space on the big screen. Though Nagarjuna continued to act in a number of movies thereafter, success eluded him. It was only in 1988 that Nagarjuna tasted victory, with the movie 'Akhari Poraatam', in which he was paired opposite Sridevi. The film was a big hit and ran for 100 days in 12 centers.
A Star Is Born
'Akhari Poraatam' was the movie that laid the foundation of success for Nagarjuna. However, it was films like Maniratnam’s ‘Geethanjali’ and Ram Gopal Varma’s ‘Shiva’ that escalated his status, further, from that of a star to a super star. The actor fully exploited the freshness of the young directors by revamping his image as an actor and adding ‘charisma’ to his roles in the movies. During this period, this Yuva Samrat also tried his hand at Bollywood. He debuted with the Hindi remake of Shiva, made under the same name. Some of the other Hindi flicks in which he acted are Criminal, Zakhm and LOC Kargil.
Krishna Vamsi’s ‘Ninne Pelladutha’ is one of the movies that enhanced Nagarjuna appeal amidst the Tamilians. He was admired and appreciated by people spanning all the age groups and genders. However, he still lacked that punch in his acting career. That punch came when he grabbed the challenging role of Annamacharya, the legendary singer/poet of medieval times, in the movie 'Annamayya', a decade after making his debut. The movie is still known to be one of the biggest hits in Tollywood. It ran for 100 days in 42 centers and also got Nagarjuna his first National Award.
Annapurna Studios and Other Career Interests
One of the most flourishing production houses in today’s time, Annapurna Studios, primarily started by Akkineni Nageswara Rao, was revived by Nagarjuna. Apart from being a production company, it also houses a film studio, in which 90% of the Tamil movies are shot. Nagarjuna's instinctive nature and prompt decision making skills not only brought him personal success, but also gave the Indian film industry some ace directors. Ram Gopal Verma and Krishna Vamsi are amongst the directors who were given their first break by Nagarjuna. Nagarjuna owns several restaurants in India and abroad and is believed to have invested large sums of money in real estate projects in Dubai.
Personal Life
Nagarjuna tied the nuptial knot two times. Presently, he is married to Amala, a popular actress in Tamil and Telugu film industry. He has two sons - Naga and Chaitanya, from his first marriage. From his second marriage, he has another son - Akhil Akkineni, who was seen in the film - Sisindri.
Awards
National Film Awards
Nandi Awards
Filmfare Awards
Filmography
1986: Captain Nagarjuna,  Vikram
1987: Kirayi Dada, Agni Putrudu, Collector Gari Abbai, Sankeertana, Majnu, Aranyakanda
1988: Janaki Ramudu, Murali Krishnudu, Chinna Babu, Aakhari Poratam
1989: Agni, Geethanjali, Shiva, Vicky Daada, Vijay
1990: Shiva, Iddaru Iddare, Neti Siddhaartha, Prema Yuddham
1991: Killer, Jaitrayatra, Santhi Kranthi, Chaitanya, Nirnayam
1992: President Gari Pellam, Drohi, Antham, Khuda Gawah
1993: Allari Alludu, Varasudu, Rakshana
1994: Criminal, Hello Brother, Govinda Govinda
1995: Gharana Bullodu
1996: Mr. Bechara, Ramudochhadu, Vajram
1997: Ratchagan, Annamayya
1998: Zakhm, Chandralekha, Auto Driver, Aavida Maa Aavide, Angaarey
1999: Ravoyi Chandamama, Seetaramaraju
2000: Azad, Ninne Premista, Nuvvu Vastavani
2001: Snehamante Idera, Akasa Veedhilo, Bava Nachadu, Eduruleni Manishi
2002: Manmadhudu, Agni Varsha, Santosham
2003: LOC Kargil, Shivamani 9848022338
2004: Mass, Nenunnanu
2005: Super
2006: Boss - I Love You, Sri Ramadasu
2007: Don
2008: King
How to Cite