Argentine Dogo dogs are highly intelligent and tough dogs that love to kiss. Learn all about the Argentino Dogo dog breed, while going through this article. 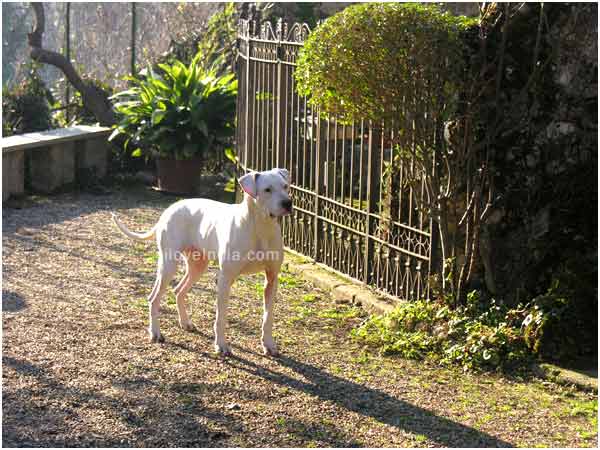 Weight: 80-100 pounds (36-45kg)
Height: male- 24-27 inches (60-68.5 cm) / female- 23.5-27 inches (60-68.5 cm)
Coat type: Short, glossy and thick coat
Argentine Dogo dogis a relatively young breed that is reputed to possess an aggressive temperament, a trait that was sought for by its breeders. The look of the dog is powerful and ferocious, but it has a friendly nature. However, it can turn dangerous when irritable and hence, is not suited to be with children. ArgentinoDogo is extremely attached with the family members. The slightest signal of danger would make this dog act at once, to save the family. It has strong, muscular and heavily-boned, yet graceful body that looks enthralling when the dog is in motion. Read on to know everything about this breed of dog, before bringing it home.
History
Argentine Dogo dog breed originated from the province of Cordova Argentina in 1925 and has an unusual history. The dog was bred by Antonio Nores Martinez, a barely 18-year-old lad who was helped by his younger brother Agustin. The dog was bred with a vision of a dog that would have great energy and endurance, qualities of a good hunter and at the same time, be both fierce and loyal to be a guard dog and a pet of the family. The fighting dog of Cordova, which was both a fierce fighter and a skilled and dexterous hunter, was used as the foundation of the breed.
Argentino Dogo was created from 10 other breeds, to eliminate any fighting enthusiasm, dog while enhancing the hunting instinct. The Pointer was chosen for its sharp sense of smell and bred with the vitality and gentleness of Boxer, impressive size of Great Dane, ferociousness of the Bull terrier, physique of Bulldog, stalking prowess of Irish wolfhound, powerful jaws of Dogue de Bordeaux, beautiful white coat of Great Pyrenees and power of Spanish mastiff.The first standard for the Dogo Argentino was written in 1928. It was introduced to USA in 1970, by Dr. Raúl Zeballos, of Las Pampas Kennels. Las Pampas Kennels has been continuously breeding Argentine Dogo since 1950.
Appearance
Argentine Dogo is a large, white, short-coated dog, with a smooth, muscular body, displaying both power and athletic ability. The length of body is just slightly longer than its tail, with females slightly longer than the males. It has a strong neck that holds a massive head, with a wide domed-skullandhas brown or hazel deep-set eyes, which look both intelligent and intense. Ears may be cropped or might hang naturally, close to the skull. The short thick tail is set low and tapers at the point. It has a powerful muzzle that is slightly higher at the nose, than the stop.
Personality
Argentino Dogo dog is a loyal dog that makes a great guardian of the home and family. This versatile animal is capable of intense concentration, is easy to train and retains what is learnt, almost indefinitely. It is protective of what it perceives as its territory and will guard it against any intruder at all costs.Though it is not a barking dog, it is endowed with a thunderous bark that can easily sweat the intruder. These dogs are energetic, muscular, large and strong mastiff type dogs, successful as guard dogs, police dogs, military dogs, and guide dogs. They are playful with the whole family, good with children and love to kiss and cuddle the family members. Though the dog is fierce, enduring, fast and powerful, it is playful, gentle and protective of its family as well.
Genetic Diseases
Argentine Dogo dog can suffer from pigment-related deafness, as in the Dalmatians and the White Bull Terriers. The dog can be afflicted unilaterally (one deaf ear) as well as bilaterally (deaf in both ears).Careful feeding and prudent exercise throughout, especially during the growth stage, can help them stay away from the diseases.
Grooming
Argentino Dogo dog has a single white coat that is very easy to care for, has no doggy odor and hence requires minimum grooming. Special attention to the nails is required, as they tend to grow very fast and need frequent clippings. This breed is an average shedder, however bathing with a shampoo specially made for white coats is suggested. Besides, it requires a regular cleaning of teeth and ears. 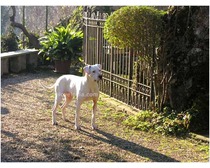 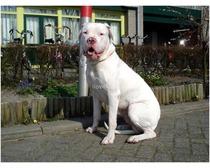