Angel tattoo designs are meant to signify something special. Read more into this article to understand the meaning of the designs and types of angel tattoos that can be inked on your body!

Tattoo selection process is one that requires time, effort and knowledge. With a tad bit of patience, you can have miraculous results that will surprise and satisfy your creativity! Most people are under the assumption that boys and girls need to have a different set of tattoo patterns. This might be true in some cases, but the angel tattoo is a popular design which can be inked on both! Although, studies show that men sport it more often than women. The significance of this design may lie in religious beliefs or mythology as angels are believed to be heavenly creatures. One of the most famous tattoo designs is that of St. Michael, the angel, slaying Satan. An interesting fact about angel tattoos is that they can be printed on any part of the body like the arms, legs, neck, shoulders, lower back, chest and face. To understand exactly what the angel tattoo stands for and how many different types are present, go onto the following article! 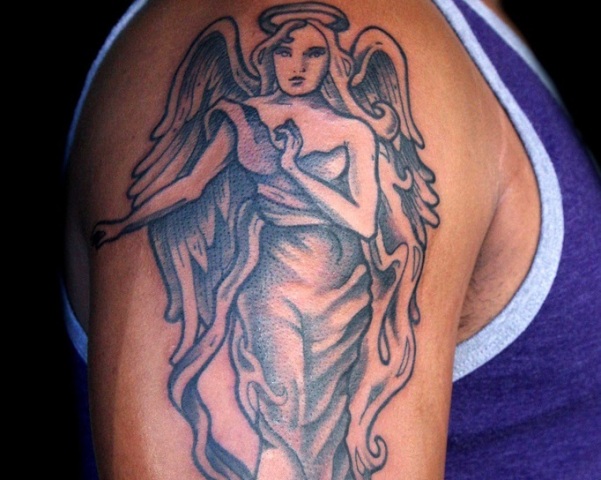 Image: Deanna [email protected]
Designs Of Angel Tattoos
History And Meaning
Types Of Angel Tattoos
Guardian Angels
These are the ultimate defenders of humans and humanity. They are inked onto the body along with a child to show a caring and helpful nature. Several people get the guardian angel tattoo to show their faith that someone is guarding them.
Arch Angels
The most royal of all the angels are the Archangels. They are supposed to be the highest class of angels because they are closer to God. Generally, those who are religious get these tattoos. St. Michael, as mentioned above, led the army of angels against Lucifer to drive him out of heaven. Hence, this is the most famous of the angels. You can see arch angels depicted with armour and a raised sword. They are supposed to be warriors of God.
Fallen Angels
During the war against Lucifer, some of the angels had what is known as the Great Fall from Heaven. They are the dark angels who lost the battle. They are always depicted in heavy black ink and are drawn with bloody swords and scarred and tattered wings. They are not religious symbols and are generally sported as a sign of rebellion againt set rules of the society.
Cherubs
The sweetest angel tattoo form is of the cherubs. They are small, childlike angels that contain tiny wings and are rounded in shape. They are happy and peaceful, hence always depicted with a smile on the face. As you might have already guessed, Cupid is the most famous cherub of all! This tattoo is symbolic of love.
Now that you know what each of these angels stand for, fixing an appointment with the best tattoo maker is the only thing between you and your tattooed self. Wait no more! Tell them what you want and get yourself inked the way you want.
How to Cite