Zurich is the largest city in Switzerland and houses some exotic tourist attractions. Check out the places to see and things to do in Zurich.

Languages: German, Zürichdeutsch, Albanian, Italian, etc
Best Time to Visit: Throughout the year
Time Zone: UTC+1
Driving Side: Right Side
Main Attractions: Fraumünster, Grossmünster, Lake Zurich, Lindenhof, Zurich Zoological Garden, Kunsthaus Museum, Landesmuseum, etc
Zurich is the largest city in Switzerland. It is also the capital of the canton of Zurich. One of the leading global cities of the world, it holds great importance in Switzerland, in terms of culture and commerce. According to the surveys conducted in the year 2006-2007, Zurich was one of the cities having world’s best living standards. The city is divided into 12 districts and is a transportation hub. It has a strong rail, road and air network, along with excellent public transport facilities. A number of cultural events are held in the city, giving it vibrancy throughout the year. The pleasant weather is yet another crowd puller, attracting tourists from across the globe. Zurich also houses some worth visiting tourist attractions. To know more about the things to do in the city, read on.
Sightseeing!
Zurich is a delight for all the visitors, as it houses some exotic places to see. The Fraumünster Church is the most impressive building in the city. Founded in 853, it has unique architectural features and its five glass stained windows are remarkably beautiful. Another church, the Grossmünster (the Great Church) was built in the 12th century. It dons a Romanesque style and is also known for its architecture as well as history. The church, supposedly, played a key role during the Protestant Reformation.
You can also visit St. Peter Church, located in the vicinity of Fraumünster. It has the largest clock face in entire Europe. Next is Lake Zurich, which is a pleasant and tranquil place, best suited for leisure walks. Another not to be missed attraction in the city is Lindenhof. It is the Roman castle in the city, which is situated on a cliff. The castle provides some breath-taking views of the cityscape. You can even go to the Zurich Zoological Garden to see some unique wildlife species preserved there.
Museums Galore!
Zurich houses a number of museums, which are known for their distinct collection. Some of the must visit museums in the city include Kunsthaus, which exhibits works of major Swiss artists like Fuesli and Giacometti. Landesmuseum is the biggest museum in Zurich and dates back to 1898. It has soaring towers and sprawling park to add to its glory. Jacobs Coffee Museum is a must visit place for all the coffee lovers, as it throws light on the history of coffee. Situated in the proximity of Lake Zurich, Circus Museum is one of a kind and provides some exclusive information. The Swiss National Museum is another worth visiting place, which provides an insight into the Swiss life over centuries.
Entertainment
Zurich provides some enthralling entertainment options for the visitors. The rocking nightlife is a must try. The most famous area for nightlife is Niederdorf, in the old town, containing many bars, restaurants, lounges, hotels, clubs, etc. The sporty souls have a great deal to look forward to, as the International Federation of Association Football (FIFA) resides in the city. Other sports events taking place here are Swiss Ice Hockey Championship, Weltklasse Zürich, an annual athletic meeting and the Zurich Open, part of the WTA tour. Apart from this, you can also enjoy cultural activities, like Opera, Ballet & Theaters, which are plentiful in the city. A number of festivals are also organized here, throughout the year. 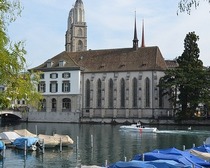