Yamaha is all set to launch the R15 sports bike in India. Find out information on features & specifications of Yamaha R15.

Derived from the internationally acclaimed 1000cc super-sport bike, the Yamaha R1, the R15 is easily one of the most powerful and refined machines to hit the Indians roads, but being a sport bike of sorts, it’s far from being a favorite among daily commuters.

Performance
The R15 dishes out a whopping 17PS of power from its puny 150cc mill. While these figures may make every college-going student’s jaw drop, they should prepare themselves for the nasty surprise that’s to come.  And that is the poor performance of the bike in traffic; having a small and powerful mill only means that the bike will be plagued by a serious lack of torque at low revs. Riders can expect to half-clutch their way even through modestly congested city traffic while riding the bike in bumper-to-bumper traffic will require serious skill, lest the wily engine stalls for simply being too powerful for its size.
It’s only beyond the 4000rpm mark that the engine shows its true mettle, offering riders with hair –raising acceleration that no exclusive ‘for-India’ bike can match. It can charge up to its top speed of 130kmph in no-time flat. Fuel efficiency in the city does not exceed more than the 40kmpl mark but won’t drop below 35kmpl either which are very reasonable figures indeed, given the gas-guzzling nature that plagues the DNA of bigger Yamaha ‘R’ bikes.
On the race-track or an empty stretch of road the bike performs well taking on corners brilliantly at high speed thanks to the bike’s race-worthy rising rate mono suspension set-up and the aerodynamic build of the front-fairing.
Design
The design of the R15 stays true to the Yamaha R line, borrowing many design cues from its bigger 1000cc brother, the R1. It features the trademark twin headlamps and sharp-edged bikini-fairing that is seen on all other R bikes. The chassis is the so-called Delta-box frame ubiquitous to both, the MotoGP Yamaha bikes and the R-series bikes which lend to the bike its sporty stance. The riding position is also true to the racing breed where the rider will have to stretch outwards and lean toward the tank at all times.
Features & Color
The Yamaha R15 features many firsts exclusive to Indian bikes like liquid-cooling for the engine and slanting handle-bars. It also features the most powerful engine in the 150cc bracket which can also out-class the Pulsar 220 on long-stretches of road. Finally, the bike is fuel-injected as opposed to most Indian bikes that make use of carburetors.
The bike is available in a variety of colors including the trademark favorite Yamaha Blue. Graphite (Black) and Blazing Red were also among the first available colors. Now the bike also comes in Impact Yellow, Midnight Black and Sunset Red.
Price
The price of the bike hasn’t dipped since its initial release and remains above Rs. 1,08,000 (on-road) in most cities.
Technical Specifications 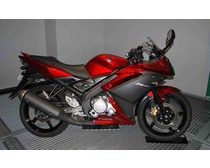