'Victory - From Ashes to Glory' is about cricket and a player's journey from personal stardom to playing for the country. Explore the star cast & music review of Hindi film 'Victory'. 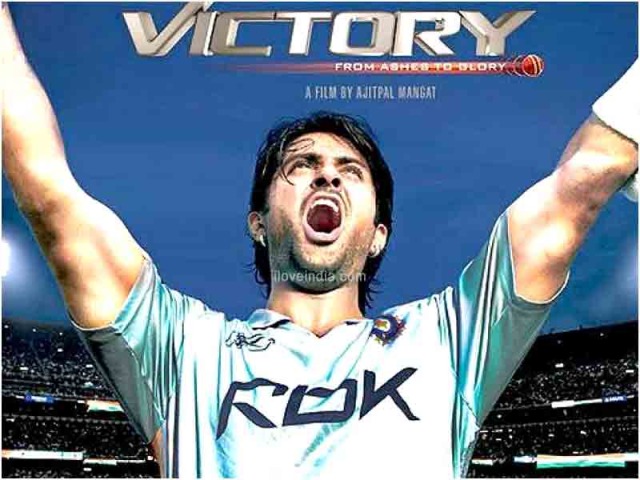 
How we wish the title of the film 'Victory' could have turned into its box office result! Alas! This didn't happen. Though the movie is not too bad per se, it doesn't have what it takes to be a hit. The storyline, showing how success can get into the head of a person and lead him astray, was clichéd to some an extent. Being a cricket-based film, 'Victory' was sure to be judged against classics like 'Lagaan' and 'Iqbal' and, somehow, it failed in the regard.
When you watch 'Victory', one of the first things that hit you is its slow pace. The movie could have been edited some more, reducing its length from the 2.5 hours. Even the script was loosely based, with the first half being quite lackluster. It is only post-interval that the movie picks some pace. But soon, it becomes slow again and remains erratic thereafter. The songs are bore, with the music being too listless. It is the cinematography that redeems 'Victory' to some an extent.
Even after the failure of 'Love Story: 2050', Hurman S. Baweja seemed to be quite confident and played his part, as the arrogant sensation as well as the man with awakened conscience, pretty well. Amrita Rao, though not much seen in the film, was okay. Anupam Kher, the veteran actor, won our heart this time as well. Even Gulshan Grover was effective. Still, the performances are not enough to make your 150 bucks seem worth it!
Victory Movie Pre-release Review
Indians have only two passions - Cricket and Bollywood! When the two of them come together, the result can only be one thing - success. Or at least that's what we are hoping will be the outcome when 'Victory - From Ashes to Glory' hits the theaters. The movie has been directed by Ajitpal Mangat, who is also its producer, along with Manmohan Shetty. Anu Malik is the music director, while the lyrics have been provided by Syed Gulrez and Amitabh Verma. The movie will be releasing on 30th January 2009.
The star cast of 'Victory' includes Harman S. Baweja, Anupam Kher, Amrita Rao, Navjot Singh Siddhu, Allan Border, Dalip Tahil, Gulshan Grover and Mohindar Amarnath. There are also a number of special appearances in the movie, of cricketers like Brett Lee, Sanath Jayasurya, R. P. Singh, Chaminda Vass, etc. Like millions of other people in India, Ram also had a dream - of making his son Vijay Shekhawat (Harman Baweja) a part of the Indian cricket team. And Vijay, a talented guy from Jaisalmer, does make his father's dream come true.
After gaining a place in the Indian cricket team, Vijay becomes a world-class batting sensation within no time. Soon, he becomes a superstar and somewhere along his journey in the glamour world, stray from his true vocation - cricket. What follows is a rapid drop in his performance, which starts becoming more and more dismal with time. By the time Vijay realizes this, he finds himself thrown out of the Indian cricket team, on disciplinary reasons. Not only does he lose his fans, but also shatters his father's dream, who suffers a paralytic stroke.

With an awakened conscience, Vijay sets out to redeem himself and somehow, manages to make it back to the Indian team and play in the finals of the Champion's trophy against Australia. Despite being down with an injury, he comes to bat when Indian is nine wickets down, risking permanent injury. He leads the country to an impossible victory, getting back his honor and fulfilling his father's dreams. The same night, Vijay retires from the game; with the aim of spending his life in teaching the budding players that cricket is not about playing for one's personal stardom, but for the pride of India & the cricket-crazy Indians.