Kiev, the capital and largest city of Ukraine, is a whirlwind of a city which can sweep you off your feet. Read on to know about places to see in Kiev. 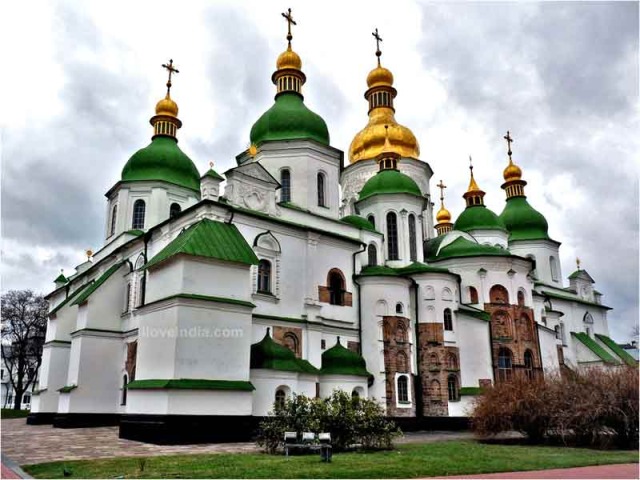 Language: Ukrainian
Best Time to Visit: April and May
Time Zone: GMT+2
Driving Side: Right Side
Main Attractions: Andrew’s Descent, Caves Monastery, Independence Square, St. Sophia’s Cathedral, Chernobyl museum, Motherland Monument
Kiev stands tall in history of Ukraine, undeterred by the numerous annexations it has undergone so far. Once known as the cradle of Slavonic Revolution, it has been ruled by the Mongols and Poles, Lithuanians and Tsars. Kiev was also a home to the Red Army and the Nazis. Once you enter this city, you would be amazed to see the classical Soviet architecture of Independence Square, in line with the golden domed orthodox cathedrals. Today, all set to reap the rewards of a growing market economy in the country, Kiev is all decked up with new monuments and malls and a lot of other things which make it the showcase of the new Ukrainian wealth, adding to the city’s refined aesthetic sense.
Kiev Tourist Attractions
Andrew’s Descent
Once you walk down this cobbled street, reputed as the city’s most popular and artistic street, you will notice souvenir stalls selling Soviet paraphernalia, specially crafted Matryoshka dolls and several other tourist tack. Andrew’s Descent is one of the oldest and most popular streets in Kiev. Although it enjoys a reputation as the city’s most artistic street, much of it is lined with souvenir stalls selling Soviet paraphernalia, Matryoshka dolls and other mass-produced tourist tack. You would be amazed to find a bunch of art galleries as well. It is also home to the resplendent St Andrews Cathedral, which boasts of an Italian architecture. Interestingly, Andrew’s Descent is notable for being the former residence of Mikhail Bulgakov. Again, it is the quickest way to reach Podil, Kiev’s downturn region where there is a curious mix of riverside restaurants, factories and churches.
Caves Monastery
It is one of Kiev’s prime tourist attractions and is located on a hill facing River Dnipro. As a whole, it is divided into two areas, namely the Upper Lavra and Lower Lavra. The Upper Lavra is owned by the government and contains a number of churches and museums. The Great Bell Tower measures around 96 meters and dominates the skyline of the city. The Museum of Historical Treasures showcases historical items, the most notable among them being the Scythian gold collection, while the Museum of Micro-Miniatures displays the works of Russian miniature artist Mykola Syadristy, which includes chess set on the head, a pin and the world’s smallest electric motor. Beneath the Lower Lavra are subterranean streets where monks once stayed and worshipped. They, today, lie in mummified form in the niches lining these streets.
Independence Square
In the year 2004, when Ukraine’s orange revolution became a global phenomenon, Kiev’s Independence Square was the focal point of all the attention received. Although things have long calmed down, this historical landmark is still the city’s most popular place where meetings are held and celebrations are organized. Just beneath the square lies an underground shopping mall wherein you can shop till you drop.
Museum of Folk Architecture and Life
Located around 12 kms south of Kiev, this open-air museum in the city is said to be one of its best. With over seven villages, each representing a different region of Ukraine, scattered in its premises, the visitors breathe fresh village air by coming across wind mills, peasant huts, churches and barns. In the summer months, the craftsmen work here and sell pottery, carvings and several other items. Even the restaurants here are noted for their special food item called Shashlyk.
St Sophia’s Cathedral
This cathedral with its 13 golden domes is a stupendous architectural monument of Kievan Rus'. Its exterior, designed in Baroque style, dates back to the 18th century. Named after the Haghia Sophia, located in Constantinople, St Sophia’s Cathedral is famous for its mosaics and frescoes. Tombs of several princes of Kiev, including its founder Yaroslav, the Wise is also located here. St. Sophia’s Cathedral, along with its associated buildings, is the first Ukrainian patrimony that has been declared a World Heritage site by UNESCO in the year 1990. 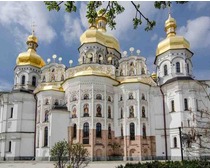