Apart from the various things to do in Athens, the city offers a number of places to see. Check out more on the tourist attractions of Athens.

Languages: Greek, English,German
Best Time to Visit: March to May and September to November
Time Zone: UTC+2/3
Driving Side: Right Side
Main Attractions: Acropolis, Temple of Olympian Zeus, National Archaeological Museum, Theatre of Dionysus, Byzantine Museum, Agora, etc.
Athens is the capital and the largest city of Greece. It boasts of a rich and prolonged history, as it is one of the oldest cities of the world. The city is a flourishing cosmopolitan metropolis, with a vast urban area and population. Athens is also the economic, financial, industrial, political and cultural nerve center of Greece. Owing to this, it is rapidly becoming a leading business hub in the European Union. However, the ancient city had its own significance. It is pulsating city famous for its art, learning and philosophy. Many great scholars, such as Socrates, Pericles and Sophocles, were born here. The city, thus, deeply influenced the EU, culturally as well as politically. Know about the tourist attractions in Athens, apart from the things to do there.
Places to See in Athens
Sightseeing!
The ancient city of Athens has a plethora of tourist attractions for the visitors. The historical monuments in the city are just spectacular, reminding of the age old glory of the diverse empires. The Acropolis is the major historical site in the city. It houses a number of ancient sites, such as the Acropolis Museum and four sacred buildings, belonging to the 5th century BC. The entrance of the summit is known as Propylaea, a monumental gateway constructed in the Ionic and Doric styles. Next is the beautiful Temple of Athena Nike, lying left of the Propylaea. The largest building on the Acropolis is Parthenon, an icon Western civilization.
Made of marble, the Parthenon was intended as a treasury as well as a sanctuary for Athena, housing a statue of the Goddess. Besides, other worth visiting site in the city includes Temple of the Olympian Zeus. It is considered to be the largest temple in Greece, dedicated to the God of Gods, Zeus. It is famous for its triumphal arch, named Hadrian's Arch. The Theatre of Dionysus is yet another archaeological building, which is an ancient auditorium. The stone auditorium was built in fourth century BC and could hold 17,000 spectators, thereby forming one of the most astounding tourist sites in Athens.
Museums
The city houses a number of museums, which are a symbol of its rich cultural, historical and imperial heritage. Amongst the worth-visiting museums in the city is the Acropolis Museum, which is situated at the foothills of Acropolis. Next is the National Archaeological Museum, which is the best museum in the entire Greece. It houses fascinating collection of ancient Greek artifacts. Moreover, the gold and bronze collection of the museum is simply remarkable. Another interesting museum in the city is Byzantine Museum.
It comprises one of the richest collections of religious icons in the world, along with mosaics, frescoes, sculptural works and jewelry of the former Byzantine Empire. Museum of Cycladic and Ancient Greek Art is also a must visit spot, as it exhibits rare artifacts from the Cycladic civilization as well as those belonging to the Bronze Age. The Museum of Folk Art showcases the vast and diverse collection of folk art, from 15th century onwards. Other not-to-be missed museums include Museum of Greek Musical Instruments and Benaki Museum.
Sports
Athens is a major sport center in the country. This can be observed from the fact that it hosted the first modern day Olympic Games, in 1896, and the second time in 2004. Thus, the city houses a number of stadiums, clubs and hosts many sports events. Here, the visitors can enjoy activities like beach volleyball, wind surfing, water polo, rugby, baseball, football, basket ball, etc. As there are four mountain ranges which extend within the city boundaries, tourists can also indulge in rock climbing, hiking, hand gliding, etc.
Entertainment
Athens provides immense entertainment opportunities to the visitors. The first and foremost thing to do in the city is to enjoy a relaxing day at the beaches near by. There are a number of organized beaches in the vicinity of Athens namely, Attiki Atki Vouliagmenis, Asteras Vouliagmenis, Asteria Sea Side, Grand Beach Legonosis, etc. Here, you can enjoy fabulous massages, delicious food, exciting water sports and spellbinding sea views. Moreover, Athens is dotted by a numerous clubs which stay open up to late midnight.

You can even have a unique experience of witnessing Greek disco, tsifteteli (belly-dance tunes), bouzoukia (crooner joints), laika (popular music), rebetika (blues) and eclectic entekna ('artistic' music). The theaters located in the city will quench your artistic thirst. Amongst the 148 theatrical stages, one of the oldest is Herodes Atticus Theatre, which hosts the Athens Festival every year. In addition, the romantic open air garden cinemas are one of its specialties. You can even hear some melody tunes at the Athens Concert Hall, known as the "Megaron Moussikis", which attracts world-famous artists throughout the year. 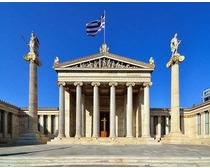