A plethora of tourist attractions dot the landscape of Nainital! With this article, explore sites of tourist interest and learn about places to see in the hill resort of Nainital.

Tucked away in the Kumaon foothills of the Himalayas at an altitude of 1,938 meters, Nainital is one of the most charismatic hill stations that India harbors. Its enchanting panorama, sprinkled with natural resplendence in the form of varicolored coppices and dazzling almond-shaped lakes has earned it the well-merited moniker of ‘Lake Paradise’. The garlanded beauty of the place beckons day-trippers, nature-seekers, and travel enthusiasts all across India. Especially, for North Indian denizens, Nainital holds an inimitable charm and forms the perfect retreat from cacophony and city blues. 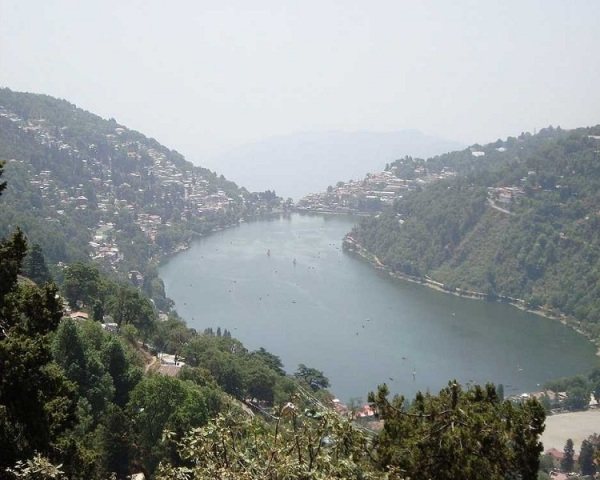 Image: By Extra999 (Own work) [CC-BY-SA-3.0 (http://creativecommons.org/licenses/by-sa/3.0)], via Wikimedia Commons
Nainital Tourist Attractions
Naini Lake
Naini Lake forms the nub of the beauty of Nainital. Girdled by lofty hills studded with attractive villas and cottages, it is the most frequented tourist visitation of the hill station. The exquisiteness of this lake is doubly magnified during the night when its sparkling waters flirt with the numerous lights hanging on its edges, and lend it an unbelievably beautiful magical aura. There are also opportunities for yachting, boating and paddling that makes it equally enticing during the day.
Naina Peak
Also popular as China Peak, Naina Peak stands tall as the highest peak of Nainital, at an altitude of 2611 meters. Positioned 6 km from the main town, it offers inviting views of the surrounding landscape. One can have 360o view of the snow-cloaked Himalayan peaks flanking the rolling vistas below. Besides, Nainital expresses herself in full magnificence from this peak. Ponies and horses are easily available to reach the place.
Snow View
An uphill drive of 2.5 km through the winding mountain streets of Nainital takes one to the lap of Snow View, which is one of the most easily accessible hilltops of the place. One can even reach the place by a ropeway (chair lift), on horseback or simply by taking a refreshing walk through the town. At a height of 2270 meters, it gives breathtaking views of the Northern Himalayan ranges with their unmatched snow-laden splendor.
Hanuman Garhi
For religious-minded tourists, one of the must-visit places is Hanuman Garhi in Nainital. Watching the sun gliding down the mountains is what makes the place the most interesting. Though popular for its spectacular sunset views, another highlight of the spot is the Hanuman temple located atop a nearby hill. Dedicated to the Hindu deity ‘Hanuman’, it found establishment under the hands of Baba Neem Kiroli and forms one of the place’s most popular tourist hotspots today.
Astronomical Observatory
Another tourist attraction that merits a visitation while on a trip to Nainital is the Astronomical Observatory. This 50-year old establishment perched atop the 1,950 m high Manora Peak is about 4.5 km from the main town. It is an interesting place to explore astronomical wonders. Open to public during the afternoons (working days), it remains flooded with visitors, especially during moonlit nights.
St. John Church
Another prime attraction of Nainital is the church of St. John. Built in 1844, the church stands on the northern end of town known as Mallital. It owes its name to Daniel Wilson, the Bishop of Calcutta, who visited Nainital in 1844 to lay the foundation of the church. The major highlight is a brass plaque on the altar of the chapel engraved with names of victims of the tragic Landslide of 1880.
Zoo Gardens
This high altitude wildlife sanctuary established to preserve the rich biodiversity of the hill station domiciles numerous species of exotic fauna and avifauna. It is a warm habitat to a variety of wildlife, including Snow Leopard, Siberian Tiger, Himalyan Black Bear, Barking Deer, Plam Civet Cat, Hill Fox, Ghoral, Silver Pheasants, Sambhar Deer, Owl, Rose-ringed Parakeet, Eagles etc. One can easily access the place, as it is just 1 km from the Nainital bus stand.
Accommodation
A tourism magnet of North India, Nainital experiences travelers’ footfalls round the year. In order to cater to its heavy tourist flow, there are a number of hotels in Nainital, ranging from luxury to budget hotels. Visitors unhesitant to splurge for comfort and opulence should head straight to The Manu Maharani, a five-star hotel, or Hotel Arif Castles, a four-star hotel. There are also a string of 3-star Hotels, some of the best being Aroma Hotel, Hotel Silverton and Langdale Manor. For backpackers, looking for reasonable rates, budget hotels like Hotel Himalaya, and Lakeside Inn truly deserves special mention.
How to Reach
By Air
The nearest airport is at Pantnagar, located 70 km from Nainital. However, airports in Delhi and Lucknow are more convenient, owing to their easy accessibility from the rest of India.
By Rail
An excellent network of broad gauge railways easily connects Nainital to places like Delhi, Kolkata and Dehradun. The nearest railhead is Kathgodam, 35 km from Nainital.
By Road
Nainital is easily linked to adjoining areas in Uttaranchal and other important north Indian cities such as Delhi (310 km), Haldwani (40 km) and Dehradun (300 km) by a good network of roads.
How to Cite