St. Petersburg is a city in Russia, which offers its visitors numerous things to do. Check out the places to see i.e. the tourist attractions in Saint Petersburg.

Languages: Russian,English
Best Time to Visit: May toSeptember
Time Zone: GMT + 3
Driving Side: Right Side
Main Attractions: Summer Palace, St Isaac's Cathedral, the Hermitage, Mariinsky Theater, the Bronze Horseman, etc
Saint Petersburg is a city in Russia, located on the bank of River Neva, at the head of the Gulf of Finland on the Baltic Sea. The city is known by a number of names, such as Sankt-Piter-Burh, Petrograd and Leningrad. It is informally also known as Piter. The city of St Petersburg was founded by Emperor Peter the Great, in 1703.  In effect, it remained the capital of the Russian empire for more than two hundred years. However, it ceased to be the capital after the Russian Revolution of 1917. Being the second largest city in Russia and the fourth largest in Europe, St Petersburg is a major European cultural center and a significant Russian port on the Baltic Sea. The city also houses some important historical and political buildings, because of which it is also referred as the ‘Northern Capital of Russia’. Thus, the city offers its travelers host of places to see and things to do.
Tourist attractions in Saint Petersburg
Sightseeing!
On the sightseeing tour across the city of Saint Petersburg, the visitors are assured an enthralling time. The historical monuments and religious structures present here are just awe-inspiring. Known as the ‘City of Palaces’, Saint Petersburg houses the Summer Palace built for Peter I, the imposing Menshikov Palace, the illustrious Winter Palace, etc. All these and other major palaces now house the private and state museums and government offices. Besides, the other visiting destinations include the largest cathedral, St Isaac's Cathedral, which has the biggest gold-plated dome in the world.
Kazan Cathedral, on the Nevsky Prospekt, is a national landmark, while the Church of the Savior on Blood marks the spot of Alexander II's assassination. Peter and Paul Cathedral is an ancient symbol of the city, containing the sepulchers of Peter the Great and other Russian emperors. Apart from this, there are a number of memorials in the city like the Bronze Horseman on the Senate Square, which is an equestrian statue of Peter the Great. Located on the Palace Square is the Alexander Column, an impressive single piece column, made of red granite. The Narva Gate and the Moscow Gate are the triumphal arches in the city, built to commemorate the victory of Russia in distinct wars.
Mystic Museums!
St Petersburg houses some mystical museums, which provide an insight into the rich cultural and historical heritage of Russia. Some of the worth visiting museums include the Hermitage, which was founded in 1764. It preserves one of the world's largest and richest collections of Western European art. Central Navy Museum is one of the oldest museums in the city. It is dedicated to Russian Naval history and houses more than 1500 exhibits. Next is the State Russian Museum, which boasts of the largest collection of Russian fine arts. To view the personal belongings of Emperor Peter the Great, don’t forget to pay a visit to the Summer Palace. Apart from this, some other interesting museums in the city are the Stieglitz Museum of Applied Arts, the Suvorov Museum of Military History and the Political History Museum.

Unbound Recreation!
Saint Petersburg is a popular center for recreation and offers many options for the same. The city houses more than fifty theaters, out of which Mariinsky Theater is world-renowned. It is also known as the Kirov Theater in the USSR, home to the Mariinsky Ballet Company and opera. Moreover, the first jazz and rock bands of Russia were also founded here, making the city an important location for musicians. The White Nights Festival in Saint Petersburg is famous for spectacular fireworks and massive show, celebrating the end of school year. Besides, the city also contains some sprawling parks and gardens. Summer Gardens are the most beautiful and oldest garden in the city. The park is laid with intricate statues and marble sculptures. 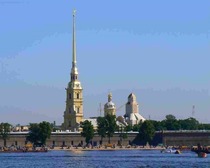