Salzburg is the capital of the federal state of Salzburg (Austria), with a lot of attractions to explore. Know more about the places to see and things to do in Salzburg.

Languages: German (official), Hungarian, Slovenian and Croatian
Best Time to Visit: Throughout the Year
Time Zone: UTC+1
Driving Side: Right Side
Main Attractions: Salzburg's Cathedral, Hohensalzburg Fortress, The Residenz, Mozart's Birthplace, Getreidegasse, Palace of Mirabell, etc
Salzburg, the fourth-largest city in Austria, is the capital of the federal state of Salzburg. The birthplace of the world-famous composer Mozart, the city prides itself on its rich past and historical legacy. Amongst the most popular attractions of Salzburg is its ‘Old Town’, which boasts of being a UNESCO World Heritage Site. The town has been built as per the world famous baroque architecture and is counted amongst the best-preserved city centers in the German-speaking places of the world. Housing three universities within its confines, Salzburg is also regarded as a student city. The gigantic castles, splendid palaces, romantic gardens, rich museums and magnificent churches of the city lure many to its territory. In the following lines, we will tell you more about the tourist attractions i.e. the places to see in Salzburg, along with the things to do in the city.
Things to Do in Salzburg
Visit Museums
Salzburg is a city with a rich history and legacy, paving the way for development of numerous museums. Amongst the most prominent ones is the Museum der Modernesalzburg, comprising of two buildings at different locations, both of which have been dedicated to beautiful pieces of art. Salzburg Museum Carolino Augusteuma exhibits a wide variety of archaeological artifacts that provide a glimpse into Salzburg’s cultural history. Then, we have Miracle’s Wax Museum, next to Mozart's birthplace, comprising of Madame Tussauds’ style wax statues, combined with modern video and media technology. Natural History Museum, on the other hand, is a treat for children, especially with its aquariums & terrariums.
Explore Old Town
The old town of Salzburg, with its world famous baroque architecture, has been credited as a World Heritage Site, by UNESCO. It is here that the house of Mozart is situated. Many of the most popular attractions of the city, like Salzburg Cathedral, Franziskanerchurch, St.Peter cemetery and The Siegmundstor (or Neutor), form a part of the old town. Outside the inner old town, you will come across the Palace of Leopoldskron, a rococo palace which is also a national historic monument in Leopoldskron-Moos. Nonnberg Abbey, a Benedictine Monastery, is the oldest religious house for women in the German-speaking areas of the world.
Look at Palaces and Castles
Hohensalzburg Fortress of Salzburg dates back to the medieval times, when it was built to serve as a defense for the rich city. The largest intact fortification in central Europe today, it impresses you with its architectural beauty, along with the exhibitions and concerts held here. Mirabell Palace, built by Archbishop Wolf-Dietrich, still charms visitors with its baroque garden, "maze" - a jumble of beech hedges and the gnome garden. The summer residence of Prince-Bishop Markus Sittikus, Hellbrunn Palace boasts of trick fountains, Monatsschlössl hunting lodge, a baroque park, a huge children's playground and a zoo. Salzburg Residenz and Mauterndorf Castle are also worth a visit.
Discover the Churches
The churches of Salzburg definitely form one of its most popular attractions. Salzburg's Cathedral forms the city’s ecclesiastical centre. Adorned with early baroque architecture, it still contains the font in which Mozart was baptized. University Church, known as 'Church of Our Lady', has an ostentatious façade and forms one of the most splendid churches in Salzburg. Holy Trinity Church is another magnificent church, designed in Baroque style and adorned with a huge dome. Kollegienkirche is a baroque church, with peculiar chair arrangement. Do visit Franziskanerkirche, Stift Nonnberg, Blasiuskirche and Dreifaltigkeitskirche.
Go Shopping
Shopaholics are bound to fall in love with Salzburg, with its numerous shopping options. Getreidegasse and the Alte Market are the best for those who are game for branded products, be it Luis Vuitton, Escada and Salvatore Ferragamo or Zara, Tally Weijl or Benetton. If you are looking for items that are artistic and hold high appeal, like Mozart's portrait, head for Getreidegasse again. For traditional or handicraft items, to take back home as souvenirs, Lanz Trachten and Gössl Gwandhaus, outside the Salzburg city gates, are the best bet. Don’t forget to buy delicious tea specialties from the merchants at the Staatsbrücke. All in all, Salzburg is surely a shopper’s paradise! 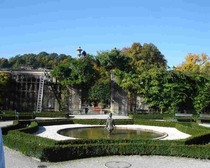