Robert Frost is a renowned American poet and four times Pulitzer Prize winner. Read this biography to explore the childhood, life and timeline of Robert Frost. 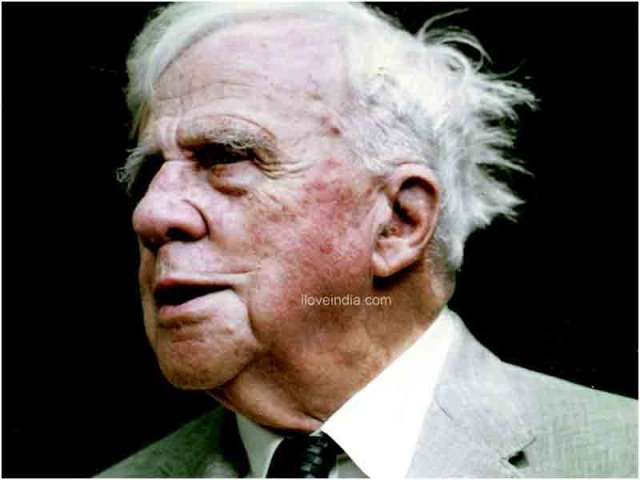 Robert Lee Frost was a renowned American Poet. He is often remembered for the use of wonderful traditional verse forms and metrics in his poetry, a style that was completely detached from the poetic movements and fashions of his time. He became popular mainly because of his real and lively descriptions of the contemporary rural life of New England. His poems were based around social and philosophical themes of the area. Robert Frost boasts of the distinction of receiving four Pulitzer Prizes for poetry, in his lifetime. His writings and inspirational quotes have immensely infulenced generations.

Robert Frost was born on March 26, 1874, to William Prescott Frost Jr. and Isabelle Moodie, in San Francisco, California. He had a Scottish descent from his mother's side and an English descent from his father's side. However, he acquired an American nationality by birth. His father was a journalist working with San Francisco Evening Bulletin and his mother was a house wife. Robert Frost spent his early childhood in San Francisco, till he shifted, along with his family, to Lawrence, Massachusetts in New England, after his father's death (in 1885).

After graduating from Lawrence High School, in the year 1892, Robert Frost attended Dartmouth College for some time. He later enrolled himself in Harvard as well. However, he never ever attained a formal degree. Frost came back to his home soon after and started working as a teacher. There, he kept on shuffling from one job to other. He even worked as a factory labor and newspaper delivery boy. However, he could never indulge his heart into these works, because of his love for poetry.

Robert Frost got his first poem 'My Butterfly' published on 8th November 1894, in 'The Independent', a New York newspaper (though he had already published a poem in his high school's magazine, it could not exactly be called a start of his poetic career). He kept on with his poetry expeditions even he was working as farmer on his Derry farm, in New Hampshire, for nine years. At that time, he used to write poems early in the morning, before indulging in the farm work. Many of these poems later became extremely popular.

Robert had to move from Derry, after he failed in his farming endeavor. In the year 1912, he moved to England, where he came across the works of contemporary British poets, such as Edward Thomas, Rupert Brooke, and Robert Graves. It was in 1913 that his first book of poetry, A Boy's Will, was published. Robert, then, struck a friendship with the poet Ezra Pound, who helped him promote and publish his work later on. Frost wrote most of his popular poetry during this phase only.

After the World War I began, Robert Frost returned to America from England.  He, then, brought a farm in Franconia, New Hampshire, and began a new life as a writer, teacher and lecturer. In later years of his life, 1916-20, 1923-24, and 1927-1938, Frost worked as an English teacher, at Amherst College, Massachusetts. During all these years, he kept encouraging his students to express the resonances of the human voice in their writing.

From 1921 to 1963, Robert spent every summer and fall teaching English at the Bread Loaf School of English, of Middlebury College, in Vermont. In the year 1921, he also accepted a fellowship teaching post at the University of Michigan.  By that time, he had brought a plot in South Miami, Florida, naming it 'Pencil Pines', to be used as his winter residence. In the later years of his life, he kept shuffling between these places. He received his first Pulitzer Prize in 1924 and then three more times, in 1931, 1937 and 1943.

Robert Frost died on January 29, 1963, at the age of 89, in Boston, after succumbing to the complications arising from his prostate surgery. He was buried in Bennington at the Old Bennington Cemetery. His memorial on the graveyard reads, 'I had a lover's quarrel with the world'

Robert Frost's personal life was quite tragic. He was only eleven when his father died of tuberculosis, without leaving any riches for his family. After some years his mother also died, leaving him under the patronage of his grandfather. In 1920, Frost's younger sister Jeanie had to be sent to mental asylum, where she succumbed to depression and other mental illness, after 9 years. In 1895, while still in Harvard, he married Elinor, his college sweetheart. Later, his wife suffered bouts of depression. In 1947, his daughter Irma had to be admitted to a mental hospital. Out of his six children, only two - Lesley and Irma outlived him. His wife became a patient of breast cancer and died of heart failure, in 1938.

1924: Got Pulitzer Prizefor 'New Hampshire: A Poem with Notes and Grace  Notes'

1931: Got Pulitzer Prize for 'Collected Poems'

1885: Lost his father,Moved with his family toLawrence, Massachusetts, New England.

1894: Got his poem'My Butterfly' published in 'The Independent', Proposed marriage to his girl friend Elinor Miriam White

1895: Got married to Elinor Miriam White

1921: Accepted a fellowship teaching post at the University of Michigan, Joined Bread Loaf School of English of Middlebury College in Vermont (as summer faculty)

1961: Performed a reading of his poetry at the inauguration of President John F. Kennedy

1963: Died in Boston, from a complication arising out ofprostate surgery