'Rafoo Chakkar' is the latest comedy flick, starring little-known actors. Go through the review and know about the star cast & music of film 'Rafoo Chakkar'. 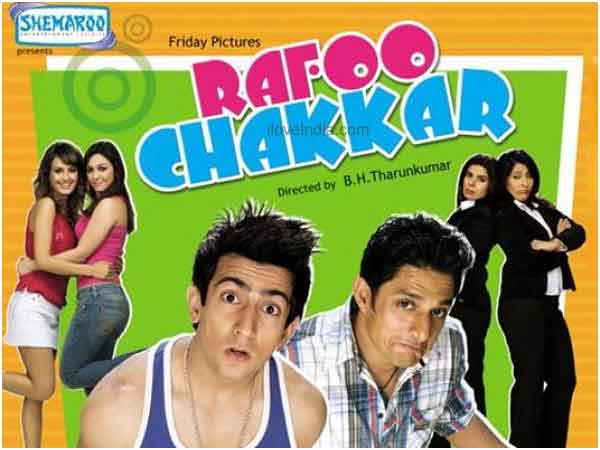 
'Rafoo Chakkar - Fun on the Run' was supposed to make you laugh, but we could hardly find ourselves even smiling. Okay, agreed that there a few places where our lips did turn into a smile, but for that, the entire credit goes to the one-liners devised by the dialogue writer. There were almost zero situational laughs in the movie. One of the major flaws was the faulty script of 'Rafoo Chakkar', which failed to maintain consistency from the start to the end.
Till the interval, the movie can still said to be a little bit entertaining. However, the after-interval portion is simply pathetic. Expecting logic is definitely too much, but what about some funny situations or some silly amusement! It is high time that filmmakers realize that comedy is not about a few laughs scattered in bits and pieces, rather it is about making the audience laugh throughout the movie. Sadly, 'Rafoo Chakkar' fails to do this.
Aslam Khan showed some improvement in his acting skills, though there is still much scope for him. Yudhishtir, the VJ in Channel V, was not bad and seems to have potential. Nauheed Cyrusi acted well, but the same cannot be said for Nisha Rawal. The latter still has a long way to go. Archana Puran Singh and Mita Vashisht played their parts well. As to Shakti Kapoor and Sadashiv Amrapurkar, they were wasted. Tinnu Anand and Ananth Mahadevan are the only ones who made some sense.

Rafoo Chakkar Pre-release Review
Get ready for a dose of laughter as another comedy movie is hitting the theaters soon. We are taking about 'Rafoo Chakkar', the film directed by B.H. Tharun Kumar. It is scheduled to be released, under the banner of 'Friday Pictures' and 'Shemaroo Entertainment', on 26th September 2008. The star cast of the movie includes Aslam Khan, Nauheed Cyrusi, Nisha Rawal, Sadashiv Amrapurkar, Shakti Kapoor, Tinu Anand, Archana Puran Singh, Meeta Vashisth, Yudisthar and Anant Mahadevan.
The story of 'Rafoo Chakkar' revolves around four characters - Pappu (Aslam Khan) and Munnu (Yudhishtir), two brother who are also known as PM, and Millie (Nauheed Cyrusi) and Julie (Nisha Rawal), two sisters who are also known as MJ. All the four individuals have rich parents and belong to the upper crust of the society. They have only one mantra in life 'enjoy and live to the fullest'. They believe in living in the present, with no worries about the future, and do not have the remotest interest in marriage.
One day, their wonderful life seems to become threatened. How? Their parents start forcing them to marry. In retaliation, the four of them run away from their house, separately ofcourse. This is when the real fun begins. Pappu and Munnu (PM) come across Millie and Julie (MJ) while on the run and immediately fall in love. They are unmindful of the fact that their father (Anant Mahadevan) had fixed their marriage with Millie and Julie only. Now, they start wooing the two girls in the best way they can.
Another twist in the tale comes when MJ meet Kokila (Archana Puran Singh) and Koena (Meeta Vasisht), two middle-aged sisters known as KK. They hate men and do not want to get married ever. KK's father, who wants to see his daughters married, breathes his last and leaves behind his will. In the will, he makes a provision that KK will not get any share in the property if they do not get married before they turn 45. On top of that, the entire property will go to a trust, managed by Dilkhush (Sadashiv Amrapurkar) and Hansmukh (Shakti Kapoor).

Since KK are going to turn 45 the very next day, they have only one day to get married and save money. By luck, they catch hold of PM Brothers that very night, when the latter break into the sisters' house to rob them. They want money to buy an expensive gift for their girls MJ. Being the Judo/Karate champions that they are, KK catch the boys. In the chaos that follows, PM get arrested and, eventually, married to sisters KK. Now, they hatch a plan to kill KK and marry MJ sisters, who, by now, are in love with them. Will KK die? Will PM and MJ marry? To know the answer, you will have to wait for the release of the movie.