After a successful debut, Imran Khan is back in action, with the movie 'Kidnap'. This review will let you know all about the star cast and music of Hindi film 'Kidnap'. 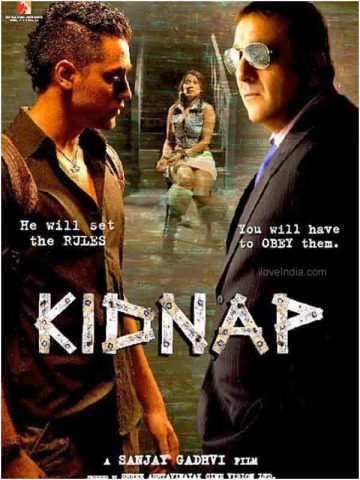 
‘Kidnap’, the second movie of the current sensation ‘Imran Khan’, promised to be a spicy thriller. With tough looking Imran, helpless ‘Minissha’ and stubborn ‘Sanjay’, we were expecting pretty much from the movie. Alas! Our hopes were dashed beyond words. Though ‘Kidnap’ had the perfect storyline for a fast-paced thriller, the execution could not match up. The movie could definitely do with some neat editing, auxiliary dialogues and exciting action.
Instead of mean ‘one-liners, we were subjected to the torture of long dialogues that seemed to leave almost no impact. Though the action sequences are not too bad, we could definitely do with some more thrills. ‘Kidnap’ tried to present love story budding amidst all the danger, but there was zero chemistry between Imran Khan and Minissha Lamba. How did Miss Lamba get to change so many outfits when she was kidnapped is another thing that had us wondering.
Coming down to performances, both Vidya Malvade and Minissha Lamba were pathetic. Even while being in distress, the mother-daughter duo managed to wear cleavage-revealing clothes. Wow! Now that is something! Though Dutt did a good job, he looked completely out of shape in the action sequences. As for Imran Khan, he completely looked his part. His acting skills were impressive, with the only exception being the way he speaks. Still, amongst all the other actors, he managed to shine out. All in all, it is a movie suited for DVD only.

After making his debut as a soft-hearted, gentle guy in 'Jane Tu Ya Jane Na', Imran Khan is back in a completely opposite role, with 'Kidnap'. Directed by Dhilin Mehta, the film falls in the action/thriller genre. It has been produced by Dhilin Mehta and will be released on 2nd October 2008, under the banner 'Shri Ashtavinayak Cine Visions'. The music directors of the movie are Pritam, Sandeep Vyas and Sanjeev Vyas. The latter two have also provided the lyrics, along with Mayur Puri.
The star cast of 'Kidnap' boasts of actors like Sanjay Dutt, Imran Khan, Minissha Lamba, Vidya Malvade, Rahul Dev, Amrita Arora and Malaika Arora. Kidnap is a high octane thriller that centers on the power struggle between a young boy and the father of the girl he kidnaps. Sonia (Minissha Lamba) is a young girl who lives with her mother, Mallika (Vidya Malvade) and grandmother. This is because her parents got divorced when she was hardly ten years old. She is leading a happy life and looking forward to her birthday, which is just a week away. However, her entire world gets threatened when she is kidnapped by Kabir (Imran Khan).

Kabir is a young boy who is interested in speaking only to Sonia's father, Vikrant Raina (Sanjay Dutt). Vikrant is a successful business based in New York and Kabir has to settle an old score with him. Vikrant comes to India and starts accomplishing intimidating tasks set out by Kabir, a precondition for Sonia's release. After each task is fulfilled, he gets a clue that takes him closer to his daughter. Why is Kabir doing this? Will Vikrant be able to complete all the tasks set for him? How far will Vikrant be willing to go? The answers to these questions are not far away, as the film's release date - 2nd October, is just a few days away.