Dil Kabaddi is a comedy-drama, with star cast of Konkona Sen, Soha Ali, Rahul Bose, Irfaan Khan & Rahul Khanna. Know more about the music and review of the movie. 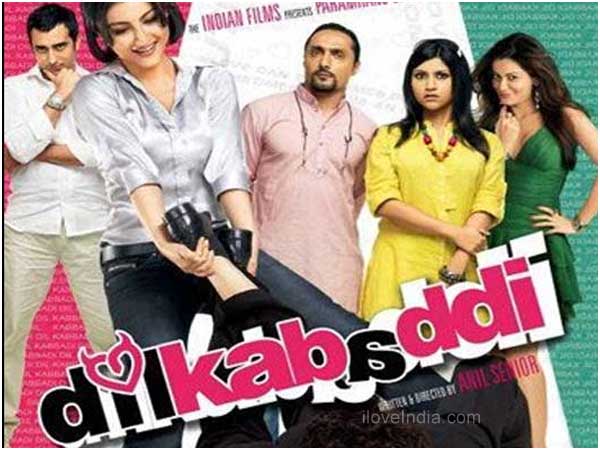 Director: Anil Sharma
Producer: Shailesh Singh
Banner: Paramhans Creations
Music Director: Sachin Ahuja, Dhruv Ghanekar
Cast: Konkona Sen Sharma, Soha Ali Khan, Rahul Bose, Irfaan Khan, Rahul Khanna, Payal Rohatgi
Release Date: 5 December 2008
'Dil Kabaddi' managed to play the right notes, though not to the level we had expected. The movie reminded us of two movies - Anurag Basu’s Life in a Metro and Kallol Sen's Kabhi Socha Bhi Na Tha, though the shades of latter were more prominent. However, the difference in 'Dil Kabaddi' is that in the movie, the adulterous acts of the partners are light-hearted and have been handled in a much more humorous manner.
In this movie, the character sketches have been drawn convincingly, and, with proper detailing. The way director Anil Senior explores their psyche is what adds to the conviction of the screenplay. You will be able to feel the temptations that come in the mind of the protagonists, of taking that plunge outside marriage. The comic timing is excellent and the adult humor placed in the script is enough to be make you laugh, without being obnoxious.
While the first half of the movie will hardly allow you to notice the time, the same cannot be said about the latter one. Post-interval, the story gets diverted, unnecessarily, into meaningless subplots and at times, even seems to be getting dragged. Repetition, missing in the first half, crops up here. Anil Senior tried to give the climax a different turn. However, it turned out to be so different that you feel incredulous, rather than surprised
With actors like Konkona, Rahul Bose, Rahul Khanna, Irrfan and Soha Ali, it was no a surprise that the performances were par excellence. Konkona Sen Sharma was excellent in her role. Soha Ali Khan was also very convincing and we hope that she gets her share of appreciation and recognition soon. Irrfan Khan displayed perfect comic timing, while Rahul Bose was seen 'truly in form' after a long time. Saba Azad and Rahul Khanna were also good. As for Payal, we wonder when is she planning to quit acting!

Dil Kabbadi Pre-release Review
Get set to witness some great performances! 'Dil Kabbadi', a comedy-drama starring Konkona Sen Sharma, Soha Ali Khan, Rahul Bose, Irfaan Khan and Rahul Khanna, is all set to hit the theaters near you, on 5th December 2008. Directed by Anil Sharma, the film also has Payal Rohatgi, along with the powerful cast mentioned before. It has been produced by Shailesh Singh and will be released under the banner of 'Paramhans Creations'. The music directors of 'Dil Kabbadi' are Sachin Ahuja and Dhruv Ghanekar.
'Dil Kabbadi' is a movie about modern-day people, who are living in the cosmopolitan city of Mumbai. It explores the relationship between urban couples and how the equations change with changing times. The film captures the transformation that the couples witness amongst themselves, but with a comic stroke. The story of 'Dil Kabbadi' revolves around the lives of two modern day, married couples - Samit (Irrfan Khan) and Mita (Soha Ali Khan) and Rishi (Rahul Bose) and Simi (Konkona).
The couples are bored of their usual life, in which the romance is dwindling day by day, giving way to rising temptation for the outside life. As the film starts, Samit and Mita announce their separation. The story continues over the next year and a half, which is wrought with moral muddles and emotional crises of the couples. Friends fight, separate, take lovers and, at the end of it all, reconcile. In a way, 'Dil Kabbadi' is a kind of reflection of the way urban marriages are evolving with the changing times.