Read on to know major tourist attractions and places to see in Hyderabad.

If you want to see the perfect amalgamation of ancient legacy and modern-day technology in India, Hyderabad (capital of Andhra Pradesh) is the place to be. On one hand, the city boasts of housing magnificent palaces and splendid monuments, on the other, it stands adorned with contemporary offices of some of the major IT firms in the country. Hyderabad also has a twin city, known as ‘Secunderabad’, from which it stands separated by Hussain Sagar Lake. Spread over the Deccan Plateau, the city boasts of a number of tourist attractions that draw people in large numbers. Hyderabad is known by a number of names ‘City of Pearls’, ‘City of Nizams’, ‘Cyberabad’ When in Hyderabad, don’t forget to taste its spicy cuisine, which is sure to leave you asking for more. 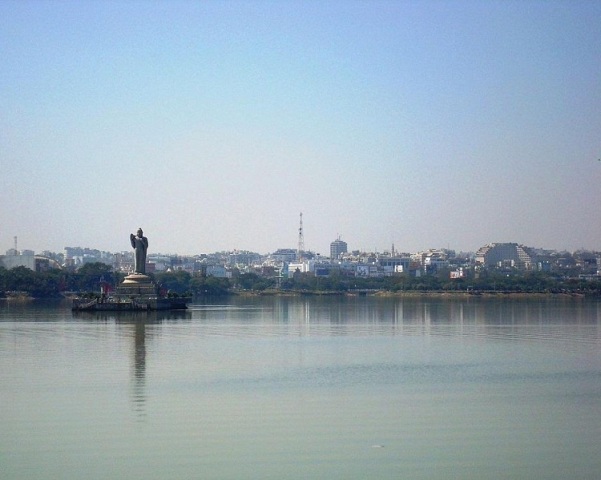 Image: Cephas [GFDL (http://www.gnu.org/copyleft/fdl.html) or CC-BY-SA-3.0-2.5-2.0-1.0 (http://creativecommons.org/licenses/by-sa/3.0)], via Wikimedia Commons
Places to See in Hyderabad
Charminar
The landmark of Hyderabad, Charminar is a magnificent monument built as per Cazia style of architecture. Constructed by Quli Qutub Shah, in the year 1591, it stands adorned with four (chaar), 55 meters long, arches (minaars), which give the monument its name. The roof of the monument houses a mosque, revered by Muslims. A trip to Hyderabad, without a visit to Charminar, is as good as incomplete.
Golconda Fort
Situated on the outskirts of Hyderabad, Golconda Fort stands as the perfect testimony to the rich heritage of the city. Built on a 120m high granite hill, by Qutub Shahi kings, it comprises of four small forts within the premises. Apart from its four massive gates, the major attractions of the fort comprise of the ‘Light and Sound’ show held every evening.
Paigah Tombs
Paigah Tombs, situated around 10 km from the heart of Hyderabad, comprise of the cenotaphs of generations of the Paigah nobles, including Asman Jah, Viqar-ul-Umara and Shams-ul-Umara. The architecture of the tombs, with amazing inlaid mosaic work, is what attracts visitors coming to Hyderabad. You can know about the Paigah ancestry from the iron plaque, placed at the entrance of the complex.
Qutub Shahi Tombs
Qutub Shahi Tombs, as the name suggests, comprise of the cenotaphs of the members of the royal family of the Qutub Shah dynasty. Serving as the perfect example of the fusion of the Indian and Persian architectural styles, these tombs stand surrounded by captivating minarets. The tomb complex serves as the venue of ‘Deccan Festival’, organized every year by the state government in Hyderabad.
Raymond Tomb
Raymond’s Tomb is dedicated to Michel Joachim Marie Raymond, a French General. Known as Musa Ram among Hindus and Musa Rahim among Muslims, the Michel used to command huge respect amongst his fellow army men as well as the general public. The tomb, a conical structure made of black granite slabs, can be visited on all days except Friday.
Salar Jung Museum
One of the oldest museums in Hyderabad is the Salar Jung Museum, comprising of rare antiques and knick-knacks, collected from the various countries of the world. The museum has been named after Mir Yousuf Ali Khan, also known as Salar Jung III, who was a major contributor to its amazing collection. The compilation displayed in the museum comprises of stone sculptures, bronze images, painted textiles, wooden carvings, miniature paintings, modern art, ivory carvings, jade carvings, metal-ware, manuscripts, arms & armor etc.
Mecca Masjid
One of the oldest and the biggest mosques in Hyderabad is the Mecca Masjid. The construction of this splendid mosque began in 1617 and was started off by Mohammad Quli Qutub Shah. However, the mosque was completed by Mughal Emperor Aurangazeb in the year 1694. The mosque is named so because of the fact that some bricks used in the construction have apparently been brought all the way from Mecca. This historic mosque is located very close to the Charminar.
Other Attractions
The other attractions of Hyderabad comprise of Hussain Sagar Lake, Gandhipet Lake, Shamirpet Lake, Lumbini Park, Nehru Zoological Park, Indira Park, Chote Hazrat ki Dargah, Sathya Sai Ashram, Birla Mandir, Ramoji Film City and St. Joseph Cathedral.
Accommodation
Hyderabad, the City of Pearls, offers no dearth of accommodation options to its visitors. Right from hotels to guesthouses, you will find every lodging option in the city. There are a wide range of hotels in Hyderabad, which suit every need and budget. Right from the business class ones to the economy ones, you will find hotels belonging to each and every category in the city.
How to Reach
By Air
Hyderabad city has an airport of its own, divided into international and domestic terminals. All the major private and public airlines operate to and from here.
By Rail
There are three stations in Hyderabad, namely Secunderabad railway station, Nampally railway station and Kacheguda railway station.
By Road