Matheran, the pristine hill station, offers a number of tourist attractions to its visitors. Explore the places to see in Matheran, Maharashtra.

Matheran, with its panoramic beauty and pristine locales, claims the distinction of being one of the most popular hill stations in Maharashtra. Situated in the Raigarh district, Matheran is one of the few places in India where you cannot reach through any form of road transport. The only way to access the hill resort is through a toy train that familiarizes you with the unblemished and untarnished beauty of the place. Perched at an altitude of around 800 m, Matheran lets you peek into steep valleys and deep gorges. The hill resort provides the perfect haven to the city dwellers, to move away from maddening pace of today’s life. 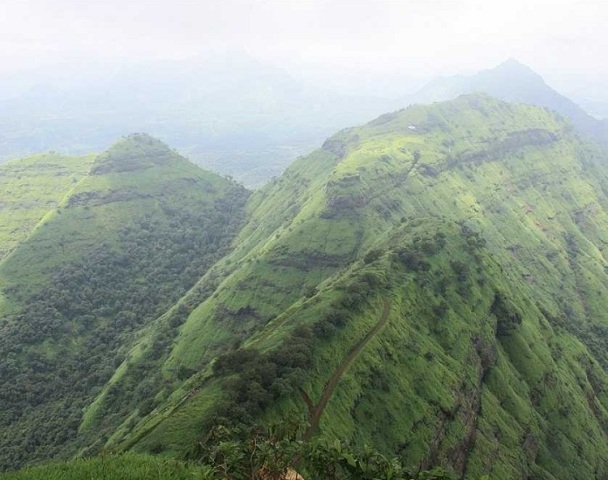 Image: By Arne Hückelheim (Own work) [CC-BY-SA-3.0 (http://creativecommons.org/licenses/by-sa/3.0) or GFDL (http://www.gnu.org/copyleft/fdl.html)], via Wikimedia Commons
Matheran Tourist Attractions
There are a number of places to see in Matheran, all of them boasting of serene environs and breathtaking surroundings.
Lookout Points
There are as many 38 lookouts points in Matheran, from where you can have picturesque views of the valley below. The spectacular beauty seen from these points is sure to remain etched in your memory for a long time to come. Throughout your visit, the naughty, but harmless, monkeys that dwell in the nearby forest will accompany you and keep you entertained.
King George Point
A trip to Matheran, without a visit to King George’s point, is as good as incomplete - especially in the monsoons. As you move up to the point, you will be enthralled by the mesmerizing views of the waterfall, formed by overflowing water from Charlott Lake, it provides. If you exercise due care, you can also hope to reach the mouth of the waterfall.
Charlott Lake
Charlott Lake is one of the most popular attractions of Matheran. The magnificent surroundings and the peaceful calm that envelops the lake will make you feel like going there time and again. The lake is also the only source of water atop the beautiful hill resort of Matheran.
The Bazaar
If you are looking for big brand shops and huge complexes, you are at the wrong place. The bazaar of Matheran reflects the simple living of its people. One street long, it has shops and stalls selling the goods produced at Matheran itself. Some of the popular items are Kolhapuri chappals, leather bags, leather belts, leather shoes, glass birds and dried wild flowers.
Accommodation at Matheran
The huge rush of tourists that throngs Matheran every year has inspired many people and hotel chains to open up hotels there. Matheran Hotels take care of varied choices of travelers. Though there are no five-star hotels in Matheran, the 3 Star hotels out there do not leave any room for complaint either. For the budget travelers, the budget and discount hotels of Matheran work the best.
How to Reach Matheran
By Air
The nearest airports from Matheran are those of Mumbai and Pune. From there, you will have to go either by road or take a train.
By Rail
The nearest railhead is at Neral. From there, you can either take the toy train to Matheran or simply trek the distance.
By Road
You can take your vehicle till Dasturi Naka and park your car there. You can take a rickshaw or a horse or walk down to reach Matheran from there.
How to Cite