The term muscle car, most popularly known as the American muscle car, is used to refer to a range of high performance automobiles introduced in the United States of America. The term is used to refer to 2-door rear wheel drive mid-size cars that were introduced in the late 1960s and early 1970s. Named for its horsepower capability, the muscle cars became a status symbol right afer their launch and were associated with masculine sex appeal. These cars are still admired by their collectors and enthusiasts. Apart from America, the muscle cars also gained fame and popularity in Australia, South Africa, UK and other countries. 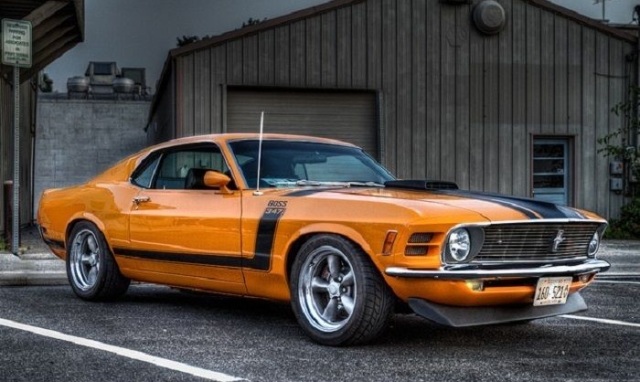 Image: [email protected]
Interesting & Amazing Information On Origin & Background Of American Muscle Cars
With the increase in the number of cars on the American roads, people longed for speed and power. This induced many individuals to experiment with their cars, in the urge to develop more powerful and faster cars. Thus, the first breed of muscle car was introduced in 1949, as the Oldsmobile Rocket 88. The model featured a high-compression overhead valve V-8, the first engine of its kind in America. The powerful engine was characterized by a displacement of 303 cubic inches and two-barrel carburetor. The car aroused public interest and became the attraction of the racing season in 1950, winning most of the races that it participated in. During this time, the only car that was a close competitor to Rocket 88 was Hudson Motor Car Company’s Hudson Hornet.
Gradually, demand for such cars increased and the following years saw some of the most powerful cars in the world. Chrysler was among the first few manufacturers to popularize muscle cars. The company came up with C-300 in 1955, which not only became the newest attraction in America, but one of the best selling cars of its century. Boasting a horsepower of 300 hp, the car was able to accelerate from 0 to 60 mph, within 9.8 seconds. C-300 had indeed become the most powerful car in America. Two years down the line, America saw another fast car in the market, Rambler Rebel, which went on to become the fastest American sedan.
During the 1960s, muscle cars gained immense popularity. Many companies like Plymouth, Chrysler, Ford and Dodge battled in the drag racing. The 1962 Dodge Dart Max Wedge was capable of running more than 110 mph or 170 kph. In 1964, other muscle cars, such as Pontiac GTO, Ford Mustang, Chevrolet Camaro and Pontiac Firebird, came up. Next came the Barracuda/Cuda and Plymouth the Duster from Chrysler. Between 1964 and 1965, Mopar launched 7-liter or 426 cubic inches V8 engine. The same year saw the introduction of Ford’s Thunderbolts in the market. By the 1970s, all the American car accompanies had one or two muscle car to offer.
The car manufacturers continued to compete to make the most powerful car in the world. The competition turned out to be advantageous for the customers, since they were exposed to a plethora of options to choose their muscle car from. The models offered during this time, under the banner of muscle cars, were Mustang GT/Cobra, Mitsubishi 3000 GT, Viper, Camaros and Trans Am Firebirds. These newer performance cars were better off than the classic muscle cars. All was going well, until the car insurance was hiked and the oil crisis of 1973 took place. While the insurance companies hiked their charges making the cars too costly and beyond the buyers’ reach, the oil crisis further hampered the development of muscle cars. This brought the development of American muscle car to a standstill.
In 1980, a slight increase was seen in the interest in powerful cars, which saw the regeneration of Ford Mustang and Thunderbird, Pontiac’s Firebird and the Chevy Monte Carlo. Though the popularity and sales improved, the muscle cars found tough competition from the burgeoning SUV market in the 1990s. Today, the muscle cars have successfully created a niche market for themselves. Mercury revived its old Marauder nameplate to Mercury Grand Marquis in 2004. The same year, Chrysler launched their LX platform, while Dodge introduced Charger. In 2006, Dodge released Charger Daytona R/T and in 2007, it launched Charge Super Bee. A new Camaro was launched by Chevrolet in 2009.
How to Cite