Often people enquire about the difference between a sunroof and a moonroof, while purchasing a car. This article deals with sun roof vs. moon roof, thereby clearing your doubts.

Most people consider their car as an extension of their personality. Thus, car companies now provide a number of different additional accessories that prospective car owners can choose from. Sunroofs and moonroofs are one such popular car accessories. A sunroof or a moonroof can definitely increase the appeal and personality of any vehicle. However, do sunroofs and moonroofs differ by any way is the first question put up by many people. Well, the answer is yes, they do differ. Before getting into that, it is very important to establish the real meaning of sunroof and moonroof. 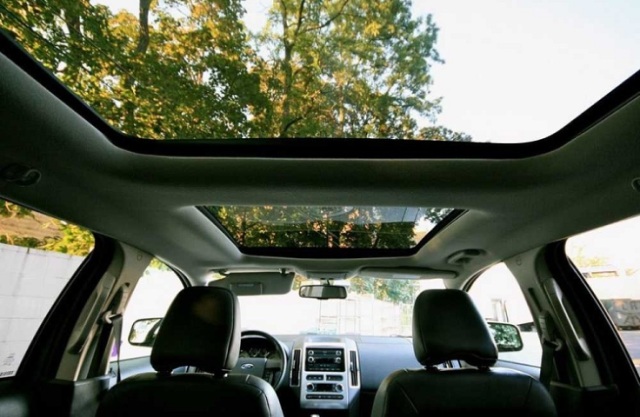 Image: [email protected]
A sunroof is a sliding or an open venting located in the roof of the automobile above the rear passenger seats. Since their inception, sunroofs are synonymous with high end luxury cars. Today, many vehicle companies have adopted this concept and customers have started considering it an attractive feature as well. While sunroof were mostly seen in sedan, today hatchbacks also boast of a stylish sunroof. Sunroofs are available in various shapes, sizes and styles. A moonroof is considered to be a type of sunroof.
Though sunroof and moonroof are used interchangeably, they have some differences between them. However, in today’s time, vehicle companies do not distinguish a sunroof from a moonroof, since both are used to describe the same thing and perform the same function. The following lines highlight some of the factors that differentiate a sunroof from a moonroof. Read on further to know them.
Difference Between Sunroof And Moonroof
One major difference between sunroof and moonroof is the material with which they are made. While a sunroof is made of an opaque material, the same metal that is used to fabricate the body of the car, a moonroof is made from glass. A moon roof is mostly tinted, to protect the driver and passengers from harmful sun rays in the day. Moon roof is made of the same tint material that is used on the car’s windows and windshields
The mechanism involved in installing sunroof and moonroof forms the next difference. The driver has the option to open a sunroof either manually or mechanically to allow the light as well as air to enter the passenger compartment. In the case of moonroofs, they are static. This means that they cannot be opened and hence, do not allow the air to enter the car. Only the fabric covered panel of the moonroof can be slid back or forth to let light enter in through the electronic controls. The exterior glass panel is not opened; thereby restricting wind and road noise enter.
Another variant of a sunroof is the ‘panoramic sunroof’. It is a sliding roof that spans the entire roof length of the car, instead of a small square or rectangular area. When the entire roof is slid back, it gives a magnificent view of the outside environment, allowing light to enter in. Known as a giant sunroof, it should, in fact, be called panoramic moonroof, for the simple reason that it is a fixed glass panel which allows only light to enter and not air.
While sunroof was first designed by a Dutch company named Hollandia, moonroof is relatively a new technology, first used by the Ford Motor Company in 1973. The first sunroof was created for venting on a stagecoach, while the first vehicle to have a moonroof was the Lincoln Continental Mark IV.
Though traditionally, sunroofs were made of metal, today other metals like glass is also used to make sunroofs. As for moonroofs, the present ones allow air to enter in, though they were initially fixed in the ceiling of the car.
How to Cite