Tales and legends of dragons have fascinated mankind for centuries. Explore this piece of writing to learn about dragon tattoos and their meanings.

With tattoo studios coming up at every nook and corner, the number of ink lovers is also on the rise. This form of body art that was once used to mark the identity of a groups of pirates and bikers is today to a certain extent popular with people of all age groups. From celebrities to common man, many can be seen sporting some whimsical tattoo design to be a part of the so called trendy crowd. Nevertheless, you can see many customers looking for a rework done on their existing tattoo designs of Celtic letters or barbwires which proves to be of no significance after a certain period of time. Therefore, if you intend to ink your body permanently, it is advisable to opt for a design that is significant rather than just a random design you can’t relate to later on in time. A dragon is one such tattoo design that will serve the purpose of your decision of inking your body. These mythological creatures are both beautiful and terrifying and hold an array of significance for people of different cultures. If you wish to know more on the meanings of various dragon tattoo designs, scroll down to read material on the same. 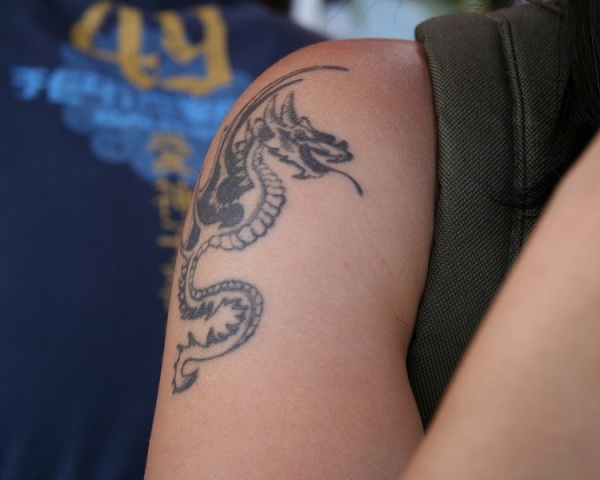 Image: Kana [email protected]
Meanings Of Dragon Tattoos
Dragons are well thought-out to be both the harbingers of fortune and fertility and the incarnation of the evil spirit and destroyer of homes. This supernatural creature is quite well-known in the world of tattoos and holds different meanings to different people and cultures. This piece of writing by now must have given you an insight into the world of dragon tattoos and their meanings.
How to Cite