Cameron Diaz is a popular American actress, mainly known for her role in ‘Charlie’s Angels’. Explore the childhood and profile of Cameron Diaz, with this biography. 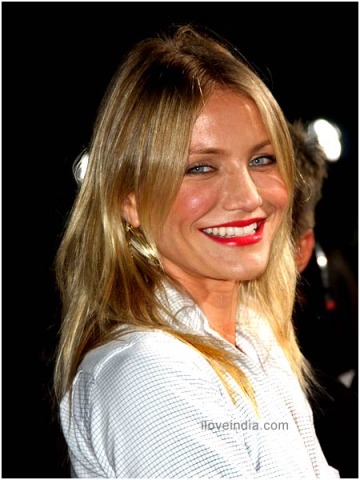 Born in: Compton, California
Nationality: American
Education: High School Graduate
Career: Actress and Former Model
Cameron Diaz is one of the popular Hollywood actresses of today. Before being a part of the film industry, she was a very successful fashion model. She made her movie debut in the year 1993, with ‘The Mask’. As recognition of her talent, Diaz has received nominations in Golden Globe Awards, BAFTA Awards and SAG Awards, a couple of times. In 2003, after doing ‘Charlie's Angels: Full Throttle’, she became one of only two actresses (the other being Julia Roberts) to join the ‘$20 Million Club’. In 2007, People ranked as the ‘Best Dressed Female Celebrity’.
Childhood
Cameron Diaz was born as ‘Cameron Michelle Diaz’ on 30th August 1972, in Compton, California. She is the daughter of later Emilio Diaz, who worked as a Field Gauger for UNOCAL - a local California oil company as well as in the pipeline department until his retirement, in 1998. He was a second-generation Cuban American. The name of her mother is Billie and she is of English, German and Cherokee Native American descent. Diaz was the youngest daughter of her parents and has only one older sister, Chimene. She did her schooling from Long Beach Polytechnic High School.
Modeling Career
Diaz started her career in the field of modeling, at the tender age of 16 years. She signed with Elite Model Management, one of the topmost modeling agencies. As soon as she graduated from high school, Diaz went to Japan and it was there that she met video director Carlo de la Torre. In the next couple of years, she was seen traveling around the world, with relation to her modeling contracts with major companies, like Calvin Klein and Levi's. Apart from gracing the cover of July 1990 issue of ‘Seventeen’ magazine, she appeared in an infamous, soft pornographic film - ‘She's no Angel’.
Film Career
The film career of Diaz started in the year 1993, when she was 21 years old. She gave an audition for ‘The Mask’and landed up with the lead role.It was after grabbing the role that she started taking acting lessons. Her debut movie ‘The Mask’ came out in the year 1994. Over the next three years, Diaz was seen in low-budget, independent films like ‘The Last Supper’, ‘Feeling Minnesota’ and ‘She's the One’. It was with her role in the 1997 movie ‘My Best Friend's Wedding’ that she received mainstream success and recognition.
The movie was followed by another major success - ‘There's Something About Mary’. The film won her NYFCC Award and Golden Globe Award Nomination for ‘Best Actress’. The next year, in 1999, Diaz was seen in the critically acclaimed movie - ‘Being John Malkovich’. Apart from being a hit, it got her Golden Globe Award, SAG Award and BAFTA Award Nominations, for ‘Best Supporting Actress’. Around this time, she starred in films like ‘Things You Can Tell Just by Looking at Her’, ‘A Life Less Ordinary’, ‘Any Given Sunday’ & ‘Charlie's Angels’.
In 2001, Diaz was seen in ‘Vanilla Sky’ and won Golden Globe Award and SAG Award Nominations, for Best Supporting Actress’, for the same. The same year, she voiced ‘Princess Fiona’ in ‘Shrek’. In 2002, she did ‘The Sweetest Thing’, ‘My Father's House’, ‘Minority Report’ and ‘Gangs of New York’. For the last film, she was nominated for Golden Globe, for ‘Best Supporting Actress - Motion Picture’. The next year, she became the second actress (after Julia Roberts) to earn $20 million for a role, when she got the sum for ‘Charlie's Angels: Full Throttle’.
In the next three years, Diaz was seen only in two films ‘In Her Shoes’ and ‘The Holiday’, apart from doing a voice-over for ‘Shrek 2’. However, in 2005, she went on a trip to explore some of the planet's environmentally unique locations, for the 10-episode MTV series Trippin'. The year 2007 saw her doing only voice-overs for ‘Shrek 3’ and ‘Shrek the Halls’ (TV). The same year, she also participated at Live Earth in New York by introducing Bon Jovi and The Police and was also ranked by People, as the ‘Best Dressed Female Celebrity’.
Personal Life
During her modeling days, Diaz met Carlo de la Torre, a video director, in Japan. After coming back to America, she moved in with him and the relationship lasted for sometime. Later, in 1995, she became involved with Matt Dillon and dated him till 1998. She was in a low-profile relationship with Jared Leto, an actor and musician, from 1998 to 2002 and is said to be his ex-fiancée. Diaz met Justin Timberlake at the Kids' Choice Awards in 2003. In January 2007, the couple announced their break-up to the media. Diaz has admitted publicly that she has obsessive-compulsive disorder and is also deeply germophobic. She lost her father to pneumonia, in April 2008.
Nominations
1998 - NYFCC Award for ‘Best Actress’, for ‘There's Something About Mary’ (Won)
1999 - Golden Globe for ‘Best Actress - Motion Picture, Musical or Comedy’, for ‘There's Something About Mary’
2000 - Golden Globe for ‘Best Supporting Actress - Motion Picture’, SAG Award for ‘Best Supporting Actress’ and BAFTA Film Award for ‘Best Supporting Actress’, for ‘Being John Malkovich’.
2002 - Golden Globe for ‘Best Supporting Actress - Motion Picture’ and SAG Award for ‘Best Supporting Actress’, for ‘Vanilla Sky’
2003 - Golden Globe for ‘Best Supporting Actress - Motion Picture’, for ‘Gangs of New York’
2008 - Kid's Choice Awards for ‘Best Voice From An Animated Movie’, for ‘Shrek 3’ and Kid's Choice Awards ‘Wannabe Award’
Filmography
1994 - The Mask
1995 - The Last Supper
1996 - She's the One, Feeling Minnesota, Head Above Water
1997 - Keys to Tulsa, My Best Friend's Wedding, A Life Less Ordinary
1998 - Fear and Loathing in Las Vegas, There's Something About Mary, Very Bad Things
1999 - Being John Malkovich, Any Given Sunday
2000 - Things You Can Tell Just by Looking at Her, Charlie's Angels
2001 - The Invisible Circus, Shrek (voice), Vanilla Sky
2002 - The Sweetest Thing, My Father's House, Minority Report, Gangs of New York
2003 - Shrek 4-D (voice), Charlie's Angels: Full Throttle
2004 - Shrek 2 (voice)
2005 - In Her Shoes
2006 - The Holiday
2007 - Shrek 3 (voice), Shrek the Halls (TV - voice)
How to Cite