There are different kinds of skin rashes that can affect the body of an individual. With this article, learn about identifying some of the most common skin rash.

The term ‘skin rash’ can be used to define the condition in which you experience spots, inflammation or changes in the color or texture of your skin. In most of the cases, rashes occur in a particular area of the body and go away on their own after some time, the duration depending on the type of rash. However, in case the rash is accompanied by symptoms like pain, rapid swelling causing shortness of breath, bleeding, skin peeling or any other extreme symptom, it is better to consult a dermatologist. This is because, in such a case, they might be indicative of some serious ailment or disease. In the following lines, we have provided information that will help you in identifying some common skin rashes. 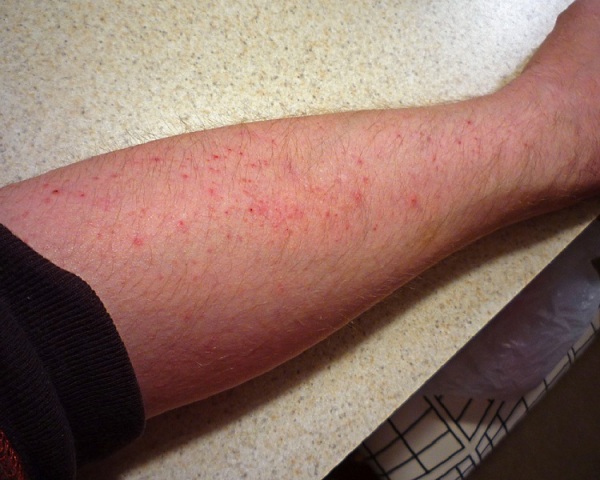 Image: [email protected]
Different Types of Skin Rash
Eczema
Eczema is a term taken to define a number of different conditions, characterized by inflamed, red, dry and itchy skin. One of the most common forms of eczema is atopic dermatitis. Eczema can occur in adults as well as children, but it is not contagious.
Granuloma Annulare
Granuloma annulare is a persistent skin problem; in which circular-shaped rash occurs on the skin, along with reddish bumps (papules), on the backs of the forearms, hands or feet. The problem mainly affects children and young adults, more commonly the females.
Lichen Planus
In case of Lichen planus, you can notice shiny, flat-topped bumps on the skin, with an angular shape and a reddish-purplish color. The most common areas for the rash comprise of wrists and ankles, lower legs, back and neck. Lichen planus is mainly seen in adults, aged 30 to 70.
Pityriasis Rosea
Pityriasis rosea is a very common, but mild, skin rash. In the initial stages, there will be a large, scaly, pink patch of skin, either on the chest or on the back. This will be followed by more patches, on the other parts of the body. The rash is accompanied by itching of skin lesions (sores) & redness or inflammation of skin.
Perioral Dermatitis
Perioral dermatitis affects the face on an individual and is seen in the form of bumps around the mouth. In rare cases, the bumps may appear around the eyes, nose and forehead also. The rash is found affecting mostly young women, but there have been few cases of Perioral dermatitis in males also.
Contact Rashes
Contact rashes, as the name suggests, are the result of the body’s contact with an allergy-producing foreign body. The most common causes of these rashes are dyes and chemicals in clothing, rubber, latex and elastic, cosmetics, soaps, detergents and plants like Poison Oak, Poison Ivy and Poison Sumac.
Seborrheic Dermatitus
Seborrheic Dermatitus, or dandruff, is a rash that is found affecting almost half of the population in today’s world. The most probable reasons for it are age, stress, fatigue, weather extremes, oily skin, infrequent shampooing and alcohol-based lotions.
Psoriasis
Psoriasis is also a very common skin rash that erupts in the form of patches of itchy, scaly and, sometimes, inflamed skin. It is a chronic condition and can occur anywhere in the body, including knees, elbows, hands, feet, scalp and back. The patches can range from being mildly irritating to totally unbearable.
Hives
Hives can be described as swollen, pale red bumps or plaques (wheals) on the skin, which usually itch, but may also burn or sting. They have been given the name of Urticaria and appear on the body, all of a sudden. The main reason for their occurrence is body’s adverse reaction to certain allergens. Hives can last for up to 24 hours, before fading away on their own.
How to Cite