The Toyota Prius is a hybrid car that runs on both conventional fuel and battery. Toyota is planning to launch the Prius in India, in 2009. Read on to find out more about the Toyota Prius.

With the ever rising fuel prices, hybrid cars are looking as a much more viable option. Japanese auto major Toyota is all set to launch its hybrid car, named Prius in India, in 2009. Hybrid cars are those cars which use both petrol and an electric motor to run. The hybrid vehicles are much more fuel efficient than vehicles which run on conventional fuel (petrol/ diesel). The emission levels are also much less which means they are environment-friendly.

The Prius will be manufactured by the Toyota's domestic arm. It is all set to come in as a CBU (Completely Built Unit). While the prices are still not clear, it is expected to be priced between Rs.18-22 lakhs. Because of as much as 114% import duties on CBUs, Toyota claims that the imports will at first, push up the price. Though there will be a demand for these vehicles mainly because of the technology, low emission norms and the great fuel efficiency but the volumes will be low, atleast initially.
The Toyota Prius started its life in Japan, where it went on sale in 1997. The sales were not so great in Japan, but Toyota still went ahead with its plan to launch the Prius in U.S. markets. At first, the sales were small although the waiting list for each car was six months. Gradually, the sales also picked up, especially after the redesign of the vehicle in 2004. The Prius has been a very successful car for Toyota, from both technical and marketing standpoint.
At present, it is sold in more than 40 countries worldwide, the major markets being Japan and North America. Toyota and Honda are the two major hybrid vehicle manufacturers in the world today. More than a million Prius were sold by Toyota by May 2008. Honda is also preparing hybrid models of their famous cars - the Accord and Civic. The sales of the hybrid cars are predicted to go upwards, the main cause being the ever increasing prices of fuel.
The Prius is also sometimes referred to as series-parallel because of its capability to run on petrol as well electric power. It is a very advanced vehicle which uses latest state-of-the-art technology. For example, the computer that is present inside the Prius shuts off the engine automatically when the car is stopped, is reversing, or is descending hills/ slopes. This, inturn decreases the fuel consumption in normal city driving. The computer also decides when it should use the engine, motor or both to power the car and recharge the battery to maximize efficiency of the vehicle.
Many celebrities have also gone the hybrid way, with purchase of the Prius. Famous Hollywood stars like Julia Roberts and Leonardo Dicaprio are said to be proud owners of the Prius. It has also won many awards and prizes from some famous magazines, engineering and consumer groups as well. 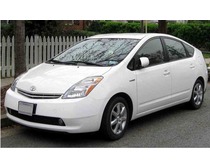