The places to see in Vancouver mainly include the ones that boast of nature’s glory. Know about the things to do in Vancouver, apart from exploring the city’s tourist attractions.

Languages: English, French, Chinese, Punjabi, German, Italian, Tagalog and Spanish
Best Time to Visit: Throughout the Year
Time Zone: PST (UTC-8)
Driving Side: Right Side
Main Attractions: Grouse Mountain, English Bay, Stanley Park, Lighthouse Park, Vancouver Maritime Museum, Vancouver Aquarium, etc
Vancouver is a coastal city in Canada, located on the mainland of southwestern British Columbia. One of the major seaports of the country, it stands surrounded by the Strait of Georgia, the Fraser River and the Coast Mountains. From being a small lumber mill town, in the 1860s, to the metropolitan city of today, Vancouver has witnessed great progress, majority of it attributed to the arrival of the transcontinental railway and the completion of the Panama Canal. The massive development of the city led to it being ranked as having the third highest quality of living in the world. Even from tourism point of view, Vancouver is not lagging behind. The large number of tourist attractions in the city serves to attract visitors to its precincts. If you want to know about these attractions, apart from exploring the things to do in the city, make use of the information given below.
Places to See in Vancouver
Mountains
If you are one of those who love to go on trekking or are game for hiking, the soaring mountains around the city are just the place to be. One of the oldest and most-developed recreational facilities in the city, Grouse Mountain also boasts of an exciting gondola ride, apart from mesmerizing views of the Capilano Lake from above. For those who like communing with nature, in its varied forms, Mount Seymour, with its Provincial Park, is a must-see. Cypress Bowl, Whistler Mountain and Blackcomb Mountain are also worth a visit.
Beaches
Vancouver, being a coastal city, is home to a large number of beaches, serving as the perfect combination of ‘Sun, Sand and Sea’. English Bay Beach has been the favorite of swimmers since the 1890s and even today, it attracts a large rush of visitors. Crescent Beach offers you not only sumptuous sea food, but also friendly locals. It is the perfect place to know the true culture of the city. If you want to laze around in the sun or play tennis, volleyball or basketball, head for Kitsilano Beach. Locarno Beach and Jericho Beach are the other good ones.
Parks
If peace and solitude is what you are looking for, Vancouver offers you its numerous parks and gardens. Stanley Park is home to the famous Lord Stanley Monument, apart from 275 varieties of roses and a lagoon that has been declared a wildlife sanctuary. Lighthouse Park provides excellent views of the surroundings, while Queen Elizabeth Park spellbinds you with its array of exotic flowers. University of British Columbia Botanical Garden and VanDusen Botanical Garden are for those interested in horticulture.
Museums and Galleries
Coastal Peoples Fine Arts Gallery showcases the works of the artists who follow the Cape Dorset style. Vancouver Maritime Museum takes you back in the past, on board St Roch (1944), Canada’s celebrated RCMP schooner. Visit the museum and discover the rich maritime traditions of the Pacific Coast. If you want to explore the culture of Vancouver, Vancouver Museum that overlooks English Bay is the place to be. Located in the heart of the city is the Vancouver Art Gallery, showcasing the works of some of the most promising artists.
Shopping
If designer apparel is what you want, visit ‘The Bay’, lined with top-notch boutiques. Waterfront Centre offers a host of shops, right from those offering clothes and fast food to the ones selling travel services. If you want to combine shopping with entertainment, go to Vancouver Centre, with 23 retail outlets and a two theatre cinema. Royal Centre is another place offering multiple services, including those of retail, cinema, food court and even a walk-in medical centre. If you want to indulge in pure shopping, go to Pacific Centre, with over 200 stores.
Entertainment
Vancouver offers a wide variety as far as entertainment is concerned. Apart from the usual restaurants, nightclubs, pubs, bars and discothèques, the city also has an amazing amusement park. Known as Playland Amusement Park, it boats of over 35 exciting rides and attractions, fun midway games and a NEW mini-golf course for 2008. When in the city, make sure to visit Vancouver Aquarium and come face to face with 70,000 aquatic animals. Finally, a trip of Prince of Whales Whale Watching, located in both Victoria and Vancouver Harbors, is a must. 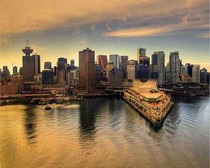