The latest avatar of the Hero Honda Splendor is the new Splendor NXG which promises something new for a change. In fact, with the notorious reputation of Hero Honda giving new names to what is basically an old-bike re-launched for the nth time, the Splendor NXG, with its many changes, could actually be a new bike altogether! The only downside to the bike is the high price.

Performance
On the outside, the 97.2cc engine looks much the same as it did on the CD100 that made its debut in the ‘80s. But looks are often deceptive. The engine is far smoother and more refined than any other unit to have ever graced the Splendor family line. It still produces the same power output of 7.7hp @ 75000 rpm but reaches peak torque of 7.5Nm at a lower 6000rpm mark - which makes the number 1 commuter even better than before! The torque is also copious and fairly consistent at the bottom half of the rev range, so riders will not have to worry about startling jumps in performance especially when moving out of stationary position. The gearbox is the same but was always great to begin with which may be the reason why Hero Honda chose to leave it the way it was. Ergonomically, the ride comfort just got better thanks to the tweaked double-coil spring suspension at the rear; riders can confidently take on pot-holes without having to worry about back-aches now. Fuel economy wise, the NXG offers an average city mileage figure that’s well above 65kmpl which is far better than what older Splendors could achieve.
Design
The Splendor NXG departs from the generic design of the older Splendors with an all new multi-reflector trapezoidal head lamp, a sleek and curvier tank and modern looking side panels that merge with the new and stylish multi-reflector tail lamp. The grab-rail at the back too has undergone change and this time Hero Honda chose to incorporate an aluminum one as opposed to the chrome pipe on earlier models. Lockable panniers haven’t been spared either; these tool boxes under the fuel tank are bigger than ever before and perfectly complement the new design. Finally, the spokes on the wheels are replaced by alloys to give the bike the last bit of modern touch it so desperately needs.
Features & Color
The Splendor NXG feature stylish new alloys and crankshaft. Originally the bike came with silver alloys, crank-shaft and engine but Hero Honda now incorporates black ones that look far more stylish and classic. The side panels now feature new graphics that were never seen before on older Splendors. Another new welcome feature is the power start which is not to be confused with electric start. The bike comes in six interesting color schemes including black with red or purple or silver stripes and candy blazing red, vibrant blue and force metallic silver.
Technical Specifications 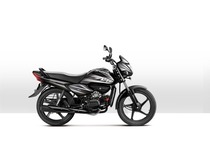