The 150cc Hero Honda Hunk is among the most talked about bikes to join the Indian two-wheeler market. Find more on price/cost and specifications of Hero Honda Hunk bike.

The Indian two-wheeler power-bike segment seems to be witnessing a slew of new entrants lately, of which one of the most talked-about is the 150 cc Hero Honda ‘Hunk’. The bike truly complements its tag line, which states ‘no one messes with it’. Its robust and deadly looks are well guarded with the powerful engine. Add to this, the superior quality performance, which gives the two-wheeler a magical edge among all the latest entrants. To get detailed information about the Hero Honda Hunk, browse through the following lines.

Appearance
Hero Honda’s latest kid is sure to be a rage amongst men, thanks to its robust masculine looks and a strong impressive presence. The bike sports a sleek, compact built and tank shrouds. The fake air scoops at either side of the fuel tank, giving an impression of being a big bike. The two-wheeler also features an aggressive visor and muscular rear cowls. Hunk’s tank offers a fine-knee recess as well. Apart from this, the bike boasts of stylish, clear lens multi-reflector indicators.
Similar to Hero Honda’s other model Super Splendor, Hunk too sports tripod instrumentation. Speedometer, fuel gauge and rpm meter are all analogue. Just like few international motorbikes, Hunk’s gasholder at the rear suspension and its telescopic fork are painted in a golden hue and this easily blends with the five spoke black alloy wheels. However, the overall theme of the motorbike is significantly black, with its handlebar weight, alloy wheels, silencer guard and the grab rail all enveloped in this one single tone.
Engine
Hunk boasts of a fuel efficient and powerful Advanced Tumble Flow Induction (ATFI) Technology engine. Powered by a 4 stroke 150 cc engine, the bike exudes a maximum horsepower of 10.6 Kw at 8500 rpm and a highest torque of 12.8 Nm at 6500 rpm. The two-wheeler has an Advanced Microprocessor Ignition System AMI, with a 5-speed constant mesh gearbox and a tubular and diamond type chassis. The battery of the bike is 12V-7Ah.
Comfort & Handling
The most distinctive feature about Hero Honda Hunk is that despite having a sporty look, the bike assures a comfortable ride both for the rider and the pillion. It has a stepped seat and rear set foot pegs, which gives the rider a sporty stance without sacrificing comfort. The two-wheeler flaunts well controlled vibrations, apart from the gas charged adjustable rear shock absorbers and a puncture resistant tire.
Variants, Price & Colors
There are two versions of Hero Honda Hunk - the kick start and the self start, launched at Rs 55,000 and Rs 57,000 respectively. The bike is available in five colors, including Panther Black, Sports Red, Ebony Grey, Candy Blazing Red and Force Silver.
Technical Specifications 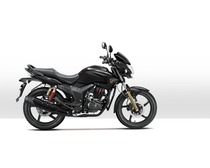