Reykjavik is the largest and capital city of Iceland and provides ample of things to do. Check out some interesting tourist attractions and places to see in Reykjavik.

Languages: Icelandic, Danish, English
Best Time to Visit: June to August
Time Zone: GMT
Driving Side: Right Side
Main Attractions: Blue Lagoon, the Hallgrímskirkja, Perlan, the National Museum, Reykjavík 871±2
Reykjavik is the largest and capital city of Iceland. Situated at 64°08' N latitude, it is the northern most national capital city of the world. Located in the Faxaflói Bay, it is the hub of all economic and governmental activities of Iceland. It is believed that the first settlement in Iceland was established here in the year 870. In 1786, the city was founded as an official trading town, which grew steadily over the decades. Thus, it has now been transformed into a regional and national center of commerce, population and administration. Reykjavik is the sole metropolitan area in the state. Currently, the city enjoys the status of being a highly modernized capital of one of the most developed nations in the world, thereby providing its residents first-class welfare system and infrastructure. As a result, Reykjavik offers host of things to do and places to see. To know more, check out its tourist attractions.
Sightseeing!
The capital city of Iceland has host of tourist attractions to offer to the visitors. Some of the worth visiting places in the city include Blue Lagoon, which is a geothermal spa and one of the most visited attractions. The spa offers steamy waters, which are part of lava formation. Moreover, the water is rich in silica and sulfur, which is very beneficial in curing a number of diseases. Another fascinating structure in Reykjavik is the Hallgrímskirkja. It is the largest church in the city and the fourth tallest in Iceland. It is named after Icelandic poet and clergyman, Hallgrímur Pétursson. The church has a unique architecture and is also used as an observatory.
Perlan is another landmark building in the city. It consists of a high dome made of glass, resting on five water tanks. The National Museum and Saga Museum illustrates on how the Vikings fought and feasted, providing an interesting experience in an interactive manner. Besides, Reykjavík 871±2 is an exhibition based on the settlement of Reykjavík. It is owned and operated by the Reykjavik City Museum (Árbæjarsafn). The exhibition showcases the archaeological excavation of the ruin of one of the initial houses in Iceland and discoveries from other excavations in the city centre.
Nightlife
Reykjavik boasts of a pulsating nightlife and is rightly referred as ‘the nightlife capital of the north.’ The otherwise deserted bars in the city are suddenly seen packed during the midnight. As compared to other alcoholic beverages, beer is quite expensive in Iceland, thus, people mostly tend to drink at home. Still, there are around 100 bars and clubs in Reykjavik, which are mostly lined on Laugavegur and its side streets. The cafes here usually turn into bars just before the dinner.
Shopping
Iceland can also prove to be a hot spot for the ones, who love to shop. Kringlan, which actually means ‘the Mall,’ is one of the first shopping malls to be built in Iceland. Built in 1987, it is the largest shopping mall in Reykjavík housing over 170 shops, restaurants and services. It contains everything under one roof, from library, theatre and cinema to liquor store, candy stores and a pub. With time, it has grown tremendously and is considered by many to be the biggest threat for the Downtown Reykjavík stores. Kringlan also provides competition for customers, to another shopping mall, Smáralind in Kópavogur. 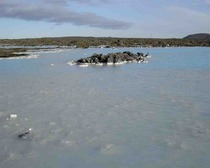